In the Ruins of Constitutional Government
​
Kim Lane Scheppele
Professor of Sociology and International Affairs in the Woodrow Wilson School, Princeton University 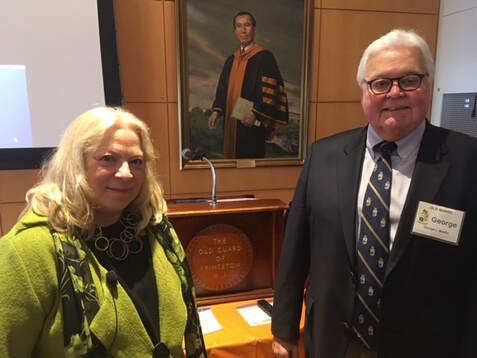 Minutes of the 19th Meeting of the 77th Year

​President Julia Coale presided over the February 13, 2019 meeting of the Old Guard of Princeton, held in the Friend Center on the Princeton University campus. Arthur Eschenlauer led the invocation and Charles Ganoe read the minutes from the previous meeting. There were four guests, introduced by David Mulford, George Bustin, John Cotton and Allen Kassof. There were 106 in attendance.

George Bustin introduced the speaker, Kim Lane Scheppele, Laurence S. Rockefeller Professor of Sociology and Public Affairs and the University Center for Human Values and former director of the Program in Law and Public Affairs. Dr. Scheppele’s research has focused on constitutions and international law, with a particular focus on Hungary and Russia. Her research focused on autocratic legalism, the rule of law, and the rise of populism. She has taught at Michigan’s Program in Public Affairs and the Central European University in Budapest. She has written for the New Yorker, The Atlantic, National Public Radio and for the last independent paper in Hungary. The topic of her talk to us was “In the Ruins of Constitutional Government.”

Dr. Scheppele began her presentation by talking about the outpouring of books on the subject: How Democracies Die, Fascism, Death of Democracy, On Tyranny and so on. She asked if there was a global crisis of democracy. Are the causes and concerns the same everywhere?

To put the present in perspective: After World War II, there was a boom in democratic governments. But then the growth of democracy started to wobble. Between 2006 and 2016 there has been a steady decline: The democracies we thought were safe are the ones that are falling apart. Now most are worse off on most measures.  The United States has dropped – it now ranks 51st in the world in its overall democracy score after Saudi Arabia, Russia, Turkey, Iran and Hungary. There is consistent backsliding when an aspiring autocrat attacks the constitutional foundations of government. This is often described as populism, but it is not.

Political parties are crumbling because the main orienting ideas of political ideology have shifted and the traditional parties can’t cope.

The new autocrats, including Orban, Kaczinski, Putin and Erdogan, pay lip service to constitutional democracy, which is honored in the breach. They almost always undermine the constitution by legal means. They ran on populist platforms and have gone about removing checks on executive power, attacking judicial independence, attacking free media and civil society. They delegitimize political opposition and rewrite election laws, and capture key offices, making it easier to win more easily next time.

Court-packing is another strategy, and Erdogan is a classic example of this. Turkey increased the number of judges so that there was a huge rise in the number of cases. Hungary did the same in 2011. It lowered the judicial retirement age to remove the most senior judges. That practice was challenged before the European Court of Justice – Hungary lost the case, but kept all the new judges. Morsi did it later in Egypt and Poland followed.

The autocrats have been good at creating distractions.  Blaming an enemy, changing the subject to migration and refugees for the purpose of whipping up public fear. They rewrite the past so that the people are blamed. Voting corruption is rampant and entrenched elites prevent any movement to achieve change. All parties are weakening – people go to the polls and hate all the choices.

1980 saw the beginning of declining support for mainstream, traditional parties. There is a new axis of politics: Democracy must have an independent judiciary, an independent media, an independent civil sector and independent electoral machinery. We need to fix the problem with the parties and get a wiser public – VOTE!

Q and A:  What is happening to parties in the U.S.? Do we need to support centerists?  How do you grab back an independent civil society so you can transition back to democracy? Answer: We are the only country that believes that money is speech. The Supreme Court cut off a bipartisan attempt at controlling campaign finance. What can we do about that? (Hungary just shut down the largest opposition party by saying that it violated campaign finance regulations!)

There was a question about religion – what impact does it have? Answer: That fight allows other things to happen in the background.  It is a distraction from other more serious matters.

Another question about Brazil which moved very quickly from the left (Lula) to the right (Bolsanaro). Similar explanation: The political parties collapsed because both parties are now split.  Voters saw no other choices – a new face that comes out of nowhere ends up being elected. Here in the U.S. we are saved to a certain extent by disorganized government with checks and balances – the federalism system means its more difficult to centralize autocracy.