February 14, 2018
​
Grounds for Sculpture:
A Model for Relevance, Approachability
And Surprise in Museums 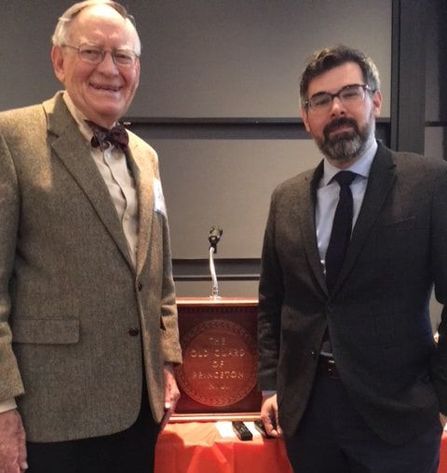 President Jock McFarlane began the meeting at 10:15 a.m., with 98 members in attendance. The invocation was led by Julia Coale and the minutes of the last meeting were read by Joan Fleming.

The president then gave a shout out to Ralph Widner for his work in getting venues and dealing with the facilities for our meetings.

Scott McVay introduced the speaker, Gary Garrido Schneider, who came to  Grounds for Sculpture four years ago from the Montclair Art Museum, where he served as it deputy director.

Mr. Schneider used images of Grounds for Sculpture to show how "relevance, approachability and surprise" have served as guiding principles for the development of the sculpture garden and its plans for the future.

Grounds for Sculpture opened to the public in 1992 and was built on 42 acres of the former New Jersey State Fairgrounds in Hamilton.  It grew out of the Johnson Atelier, a design studio founded by the sculptor and philanthropist Seward Johnson.  More than half of the works at GFS grew out of the atelier. This foundry and training center for artists and skilled crafts persons promotes education and appreciation of sculpture and public art.  It has attracted artists from around the world, some of whom have settled in the area and continue their work.

Grounds for Sculpture has expanded into an extensively landscaped park and includes a museum, a restaurant and over 20,000 square feet of indoor galleries. It was designed for and by artists and for the public and maintains a collection of more than 350 sculptures, many of them large scale.

Mr. Schneider joined GFS four years ago when the assets of the Johnson Family Foundation were transferred to the Grounds for Sculpture nonprofit organization. This nonprofit has continued to grow and prosper independently of the family, but has maintained a connection with the Johnsons to ensure GFS sustainability.

GFS was, from the beginning, committed to making art accessible by “inviting people in” through their displays in natural settings.  Its current mission, adopted a year ago, is to “provide art and beckoning spaces to welcome, surprise and engage all visitors in the artists' active invention.”

Mr. Schneider described Seward Johnson as irreverent, with a great sense of humor, playfulness and joy that infused the park and its works.  He said GFS is unique among sculpture parks, where your emotional experience of art changes as you walk into nature.

Mr. Schneider used slides to help describe the grounds, starting with Walter Dusenbury's “Damascus Gate” at the entrance.  He said it was modeled on ancient gates that welcomed guests into the promise of a city.  It is an unacademic design that takes art off the pedestal and puts it into nature.

At GFS, nature is framed and reflected in the works of art. Mr. Schneider said that one work can lead to another, beckoning the viewer. Visual portals in the sculptures and the curves around park grounds encourage curiosity and take you farther into the park.  And outdoors, the park is always shifting with the time of day and the season.

He showed Seward Johnson's sculpted recreation of Renoir's “Luncheon of the Boating Party,” which is set in the old landscape of the original painting.  But this work takes on a totally different effect when children or grandchildren enter into the work and mingle with the party at the table.

The park has many water features, misters and plants, which can give you a sense of mystery as you engage with the art.  Many of the installations are permanent and essential parts of the park, like Carlos Dorrien's “Nine Muses.”  It was set in a water feature and began with a low surrounding hedgerow, which has now grown into an outdoor room, surrounding the muses.

A pond was designed specifically for Bruce Beasley's stainless steel sculpture, “Dorion.”  The artist said it was his favorite setting of his work.  The park invested $90,000 for this installation.

GFS takes its stewardship of the park very seriously, not only in innovative new displays but also in maintaining the existing installations and landscaping built over the last 25 years.

Mr. Schneider is very proud that there are 20 artists’ studios on the grounds, many of which are inhabited by former employees of the Johnson Atelier, who still contribute to the sculpture garden.

Horticulture is both a supporting structure at GFS and a star in its own right.
As a good environmental steward, it has used reclaimed plant material from construction sites and from nurseries that which have closed to landscape and has hired a full-time horticulturalist.  Having lost that gardener, however, to Longwood Gardens, he made a pitch for recommendations from the Old Guard.

Visitors think of GFS as not only an art institution and a garden but also as a wonderful restaurant, Rats, which has been a popular and cherished part of the Grounds.

Mr. Schneider said that for years, GFS was considered an outlier in the art world, with Seward Johnson creating his own path, operating separately from the art world.  But he feels GFS is now reconnecting with the art world by sharing its success in re-engaging audiences. Storm King, the nation's premier sculpture park, with icons of modern sculpture, recently called to ask him how GFS handles weddings, food and customer services. So he feels that GFS has, in many ways, begun leading the way in how art institutions are evolving.

There are several ways he sees this happening.  Using slides, he illustrated people engaging with the works and connecting with loved ones.  He showed old and new friends spending time in spaces of fun and irreverence and celebrating spiritual renewal and exuberance. And, of course, there were romantic moments, special occasions and weddings.

He cited an annual dance festival, where the grounds became a unique stage and dancers directly respond to the works of art. Another example of evolution has been Rats, with its winsome “Wind in the Willows” theme and fine French-fusion cuisine.  GFS is also experimenting with on-the-grounds dining.  It has also partnered with the Poetry Society of New York, encouraging people to write poems inspired by the landscape.  Art workshops are also held on grounds for and children and adults. And on-campus artists demonstrate their techniques in a program called “Artists in Action.”  Last summer the sculpture garden even had illuminated seesaws, which brought in record numbers of young visitors at night for four weeks.  Many of the children had never ridden a seesaw because they'd been removed from parks for reasons of liability.  They were joined by many seasoned seesawing adults.  Last summer GFS offered “First Fridays,” with a beer garden and live music, tours and activities.

Another unique aspect of the sculpture garden’s allure is touch.  GFS allows people to touch many of the works, which can be a unique way of understanding them; by feeling their temperature, texture and contours.  Touch tours are offered for the visually impaired as well. This can lead to the patina of the most loved pieces being worn away in places, or of the loss of grass where popular photos are taken.  These are conservation nightmares, especially when still trying to encourage the enthusiasm of 260,000 annual visitors.  But many of them are first-time sculpture and park visitors, and this experience is their entry point to a new world.

Mr. Schneider was surprised when he first arrived at having to turn people away on some summer weekends, an unusual experience for a man who has worked in museums his whole career.  For the last couple years GFS has focused on getting people to the park during lower-capacity hours in the evening.  For instance, the sculpture garden held an outdoor concert at night, inspired by the works of an adjacent gallery.  A pianist played, but was silent to all except those with headsets, allowing people to participate in the concert while sitting, lounging or walking through the park, without distracting others.

Mr. Schneider was also surprised at first to see plastic poppies on the lawn below a Seward Johnson piece.  It seemed inefficient when they had to be replaced with longer and longer stems as the grass grew.  It wasn't until he saw them still in bloom above the snow that winter that he understood Johnson's vision.

The sculptures transform with the seasons, and GFS provides activities indoor and out, especially in the winter.  And while most museums display 5 percent or 10 percent of their collection at a time, GFS exhibits 90 percent.  Fifty to 60 of the artworks are off-site, leading to the grounds or at other sites like the Robert Wood Johnson Hospital, the Trenton-Mercer Airport and Quaker Bridge Mall.

In the coming years, Mr. Schneider wants to refocus people’s attention on the works of art; to encourage direct experiences and deeper encounters with the sculpture -- but never at the expense of becoming any less approachable. He said that some museum directors might scoff at having a wedding at their facilities, thinking it wasn't an elevating experience.  For Mr. Schneider, someone spending the most memorable day of one’s life at GFS is an elevating experience.

Did Rats give birth to GFS?
It was the opposite.  The atelier came first, then the park was created to support GFS.  Seward Johnson and his wife, Cecilia, found themselves attracted to countryside restaurants outside of Paris and thought a similar restaurant in the park might draw people to GFS, which it does.

Would you give credit to the photographers whose pictures you've used?

David Steel is the photographer and works for the Johnson family.

Talk about the fees charged and the financial structure of GFS.

GFS has a budget of $8 million, 60 percent of which comes from earned revenue and 40 percent from contributions.  Admission is $10 to $1 a person, which accounts for $2 million, which is critical.  The shift of stewardship from the Johnson Family to a nonprofit structure has resulted in a reduction of a quarter million a year from the family, and will sunset in three years.  The nonprofit has built a cash reserve of $6 million over the last few years and is well on its way to being fully self-sustaining.

The interactive sculptures, such as George Segal's “Depression Breadline,” where people join the line for pictures, are something special.  Will you continue to create more of these?

Mr. Schneider agreed that GFS would and said the challenge will be to move beyond figurative work like that and still maintain the interactive interest of the public.

How was the Marilyn Monroe exhibit received and where is it now?

Marilyn was part of the Seward Johnson retrospective that Mr. Schneider encountered in his first days on the job, where over 150 works of Johnson's work were displayed.  There are about 30 now.  Marilyn is now in Australia, with two editions of her in China.

How does GFS care for the sculptures that are off-grounds, leading to the park?
GFS has had great luck caring for them, with access rights from the property owners and repair available through the atelier.

Artists whose work was referenced through photos: