​Fragile Families in the 21st Century 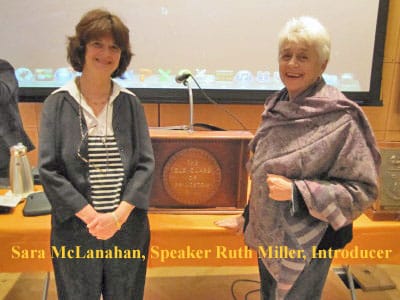 Minutes of the 20th Meeting of the 70th Year
President Varrin called the 20th meeting of the 70th year of the Old Guard of Princeton to order at 10:15 a.m. The Invocation was led by Don Edwards. Arthur Eschenlauer read the minutes of the February 8th meeting. There were three guests: Perry Morgan introduced his wife, Liz, and Nicholas Van Dyck introduced his wife, Marcia, and Beryl McMillan. The attendance was 99.

Ruth Miller introduced the speaker, Sara McLanahan, William S. Tod Professor of Sociology and Public Affairs at Princeton University. Her topic was “Fragile Families in the 21st Century”, the results to date of an extensive and ongoing study Professor McLanahan has undertaken.

Non-marital childbearing increased dramatically in the United States during the latter half of the twentieth century, changing the context in which American children are raised and giving rise to a new family form – fragile families – defined as unmarried couples with children. The proportion of all children born to unmarried parents grew from about 4 percent in 1940 to nearly 40 percent in 2006, an increase of almost ten fold. Although the rate of increase was similar for whites and non-whites, the impact was more dramatic for non-whites because they started from a much higher base.

Having defined what a fragile family is – an unmarried couple with children - the speaker raised the question – Why do we care? We care, she said, because in such families  problems abound: lower earnings for the father: higher mental health problems for the mother: high levels of stress; and high child aggression and depression. In other words, we care because an increase in fragile families does not bode well for the children and may very well be perpetuating economic and racial disparities in future generations. And this affects all of us.

The Fragile Families Study examined 4900 births -3700 non-marital and 1200 marital in 20 cities and 75 hospitals. Interviews were held with the mother and father soon after birth, with follow-up interviews with both parents when the children were 1,3, and 5. Child assessments were taken at age 3 and 5. A  9 year survey is about to begin.

The study raised many valuable questions and concerns, but, as so often is the case, answers are hard to come by.

Two interesting and revealing facts emerged:The speaker summed up her presentation with these sobering facts:
Fragile families are a growing part of American family life. They are a consequence of pre-existing disparities – race and class. They create new disparities – instability and complexity. They are an important mechanism in the reproduction of race, class and gender disparities.

Identifying the problems faced by fragile families is a necessary first step. These problems are not going to go away by themselves. Their impact on society is one that affects all of us in one way or another. Pinpointing the places where positive changes can be brought about offers some degree of hope. But the problem is significant.

In responding to questions, the speaker added some interesting observations. With the advent of the pill, marriage is not necessary in order to have sex. Among the college educated and more affluent, non-marital births are rare, couples are getting married later and they are working to have a good marriage. The “marriage bar” is going up. But among the less educated and less advantaged, non-marital  births continue high, and fewer couples are getting married. And thus the problem continues.