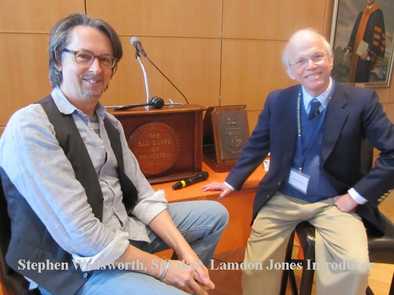 The presentation, "Presenting 'The Figaro Plays'" was done as a Question and Answer conversation between Stephen Wadsworth, adapter and director of those plays and the Old Guard's own, Lanny Jones. Stephen Wadsworth is a translator, actor, writer, teacher. The plays, written by Beaumarchais in the 18th Century, have formed the basis of the operas Figaro and The Barber of Seville, and  are to be presented at McCarter April 1-27.

Q:What is your life like as a director?
A: It involves set design, rehearsals, auditions, more auditions. It begins--at McCarter at least (after NPR at  home) at about 8 a.m. and the last tasks wind down at about 11 p.m. It's busy!

Q:Why do we care about the plays?
A: The Figaro plays initially and ostensibly turn on the Droit du Seigneur  (if you have to ask--don't!) and represent a situation comedy. They also represent themes on the rights of women, the chasm between rich and poor, and the aims of the Enlightenment. Remember it was women who instigated the French Revolution only 5 years after these plays were written. At the same time, they are works of art, and therefore uphold the beauty of those ideals in forms which are themselves beautiful.

Q: And the audience won't disconnect?
A: It is possible to translate and adapt in order to keep the themes pure but also to open up the scenes to make those themes clear across the centuries.

Q:Is there a difference between opera and drama?
A: Not in the most profound sense: acting is vitally important to opera, and both are as real as life itself Great art is universal; these plays are alive politically, deeply felt, and at the same time comedies. All this enables then to engage the audience across the centuries and probably for all time.
​
Q: Would we ask Stephen Wadsworth back to the Old Guard?
A: You betcha!