Invention to Innovation to the Marketplace:
A View From the University Perspective 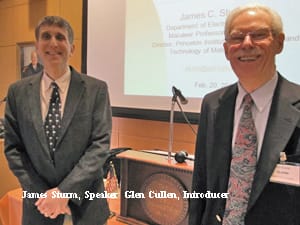 Minutes of the 18th Meeting of the 71st Year
President Ruth Miller called the 18th meeting of the Old Guard’s 71st year to order on February 20, 2013. Don Edwards led the Invocation, and Eliot Daley read the minutes. Guests Katherine Kish and Bradley Borkan were introduced by Ralph Widner and Harold Borkan, respectively. There were 98 attendees.

Speaker James C. Sturm ’79 was introduced by Glenn Cullen. James Sturm is the Macaleer Professor of Engineering in the Dept. of Electrical Engineering and the Director of the Princeton Institute for the Science and Technology of Materials (PRISM). His topic, “Invention and Innovation to the Marketplace: View from the University Perspective” emphasized that a university or any organization can have a large impact only if invention is coupled with innovation, which is the creation of an actual product that is successful in the marketplace. This is what makes an economy grow. He showed a money flow diagram in which both government and private investors fund university research and small companies, often startups, so that both invention and innovation can flourish.

Jim was inspired by Professor Stuart Schwartz to create connections between the University, industry, and the State of NJ to move technology and the local economy forward cooperatively. This led to the formation of POEM, the Princeton Center for Optoelectronic and Electronic Materials. Following his involvement in an undergraduate biology course, Jim wanted to improve and expedite the practice of biological R&D, and Shirley Tilghman, a professor of Molecular Biology at the time, had ideas to expand into areas of health, energy, and environment. Together, they put together a DARPA (Defense Advanced Research Projects Agency) proposal, leading to the formation of PRISM, and according to Jim, to the Presidency of Princeton for Professor Tilghman. I wonder if, in President Tilghman’s account, the same events resulted in Sturm being appointed head of Prism.

There are four principal directions for innovation at PRISM: Quantum materials and devices, large-area intelligent systems, optics and sensors, and bio- and nano-materials. Jim spoke in detail about the last: Bio- and nano-materials. He described PRISM-originated devices consisting of arrays of channels or barriers that perform functions such as sorting of DNA by length, separation of white and red blood cells, harvesting of stem cells, and studying the evolution of cancer cells into drug-resistant forms.

We heard Prof. Robert Austin recount his studies of the evolution of cancer cells on Oct. 20, 2010, using the kinds of device substrates described by James Sturm. He told us that cancer cells evolve and become immune to anti-cancer drugs. This explains the all too frequent and sad story of the cancer patient who makes an outstanding recovery for a few months and then falls back. We can hope that the work of people like Sturm, Austin, and their associates will contribute to permanent cures.

Professor Sturm recalled that he interviewed at a financial firm while an undergraduate. He thought he would enjoy finance more than electrical engineering. At the end of the day a man with a really big office asked him to explain the difference between current and voltage. An hour of discussion later, Jim walked out of that office knowing that electrical engineering was his future. I suspect that a few of us at the lecture here might have wanted to hear some recollections of that discussion.