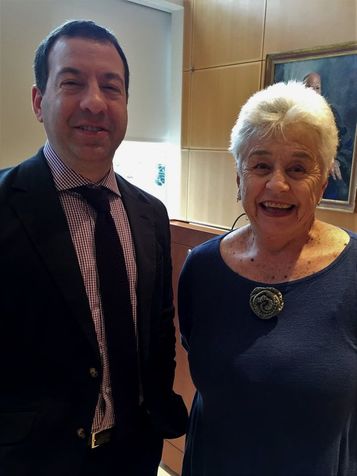 The meeting was called to order by President Jock McFarlane at 10:15 a.m., and 115 members were present. The invocation was led by Charles Clark, and the minutes of the last meeting were read by Christopher Coucill.

Ruth Miller introduced our speaker: Dr. Gary Bass, professor of politics and international studies at Princeton University, on the topic “Nixon, Kissinger and a Forgotten Genocide.”

The India-Pakistan conflict in 1971 resulted in deaths of at least 200,000 to more than two million. Also, as a result of the conflict, more than six million refugees were exchanged between the two nations.

Professor Bass stated at the outset that two of the world’s great democracies, the United States and India, responded to one of their worst crises in 1971. Political frictions had developed between East and West Pakistan. In a general election in December 1970, the Awami League, an advocate of autonomy for East Pakistan, won 153 of the 163 seats allocated to East Pakistan. The Pakistani army suspended the results of the election, and in March 1971, East Pakistan declared itself as the new independent nation of Bangladesh. Professor Bass noted that Bangladesh, with a population of over 160 million, is now the eighth-largest country in the world.

Subsequently, the Pakistani army, which consisted principally of soldiers from West Pakistan, attacked the Bengalis and Hindus in East Pakistan and arrested the leader of the Awami League. Bengalis resisted and initiated guerrilla warfare. Millions of Bengalis and Hindus fled to India, and many were killed in transit. In December 1971, Indian troops intervened in East Pakistan and in a two-week war defeated the Pakistani army, capturing over 90,000 soldiers. A summit meeting in July 1972 established a truce line and agreed to settle differences peacefully.

The United Sates was caught between competing interests. Pakistan was a natural ally of the United States, as their principal competitors were India and China, both of whom were roughly aligned with the Soviet Union. The Pakistani army was supplied with American military equipment.

The principal leaders in this emerging conflict were President Richard Nixon and Secretary of State Henry Kissinger of the United States, Yahya Khan, the head of the Pakistani army, and President Indira Gandhi of India.

Among the critical resources available to analysts now are some of the Watergate tapes. These of course concern the Watergate scandal, but they also captured private conversations of Kissinger and Nixon about the emerging situation in East Pakistan. Both were strong supporters of Pakistan strategically, and of Yahya Khan, as a way of protecting their position in Southeast Asia. Both hated Gandhi and feared her socialist policies and loose alliances with the Soviet Union. She was characterized as a “bitch” in one of their conversations. In contrast, they strongly supported Khan as an ally, even after the genocide was underway. On the side, Khan was quietly working to enable Kissinger’s secret visit to China, which took place in July 1971.

Immediately after Bangladesh declared its independence, on March 26, the Pakistan army moved against the Hindus and the Bengalis, and mass killing began. At that time, the ranking United States diplomat in East Pakistan was Archer Blood, and his associate was Scott Butcher (Professor Bass noted the irony of their names). They saw the terrible massacres that were taking place and sent a stream of wires to Washington advising of the warfare, but they were ignored.

The American ambassador to India, Kenneth Keating, joined in registering an objection to the American policies of inaction. Kissinger characterized him as having “gone native.” On April 6, Blood and other American Foreign Service personnel in Dacca sent a telegram to Washington stating that “Our government has failed to announce the suppression of democracy, our government has failed to denounce atrocities” and, “unfortunately, the overworked term genocide is applicable.” Kissinger and Nixon were furious, and Blood was demoted and forced to come home. Both Nixon and Kissinger didn’t want “to squeeze Yahya,” and they both wanted to believe that he could still suppress the Bengali resistance. Inaction was their chosen course of response to the genocide.

Indira Gandhi, meanwhile, was sitting on the sidelines, but tales of the atrocities were circulating and massive numbers of refugees were flooding into India. American support for Pakistan was deeply resented, particularly the continuing shipments of American arms to Pakistan. Kissinger had stated to Nixon that continuing arms shipments were illegal, but Nixon and Kissinger had concluded that “We have done worse.” They did not want to offend Khan, and the shipments continued, although on a reduced basis. Finally, under great pressure to react, Indira Gandhi sent the Indian army into East Pakistan in December, 1971, and soundly defeated the Pakistanis.

After the resolution of the war, Nixon recognized Bangladesh in 1972. As a consequence of the war, Kissinger wrote that our relationship with China had been enhanced and was somewhat better with Pakistan. But our relationship with India was at a low ebb and remained so for decades. Both Nixon and Kissinger wrote memoirs in which they commended themselves and claimed that they had done all they could.

The Old Guard applauded Professor Bass when he finished. Several questions were asked: about the influence of the cold war, about the applicability of the lessons of 1971 to the current persecution of Muslims in Burma and about current United States policies in Southeast Asia. Professor Bass responded that Cold War issues were dominant, that the Burmese genocide was ongoing and that the Trump administration was ignorant about issues in that part of the world.