An Update on the Economy: Focusing on Jobs 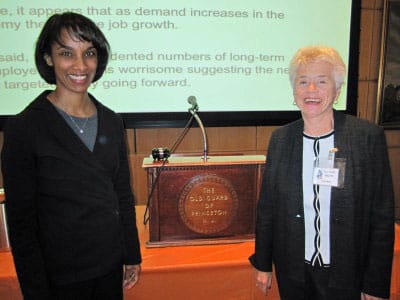 The speaker was introduced by Ruth Miller.

Cecilia E. Rouse is a Professor of Economics and Public Affairs at the Woodrow Wilson School and the Lawrence and Shirley Katzman and Lewis and Anna Ernst Professor in the Economics of Education. From March 20, 2009 to March 1, 2011, she was a member of the President’s Council of Economic Advisors. Previously, she served as a research associate at the National Bureau of Economic Research, which is the body that declares the start and end of recessions. In 1998 and 1999 she was a member of the White House National Economic Council.

Her PhD is from Harvard where she also earned her undergraduate degree. She started out expecting to earn an engineering degree but was stirred to study economics by Harvard’s legendary Econ 10 course. A proficient flutist and pianist, she once wrote a paper on the subject of “Gender Bias in Orchestral Auditions.”

Though no longer a member of the President’s Council of Economic Advisers, she “continues to provide advice on how best to jump start the economy and how best to move President Obama’s job creation proposals forward.

Her topic today was “An Update on the Economy,” with a particular focus on jobs.

As we might expect, her presentation was heavy on statistics, presented on over 30 slides.
The “big picture” is that actions by the Obama administration stopped the hemorrhaging of jobs, made things better, but leave three important unemployment issues remaining:
Among the highlights of the slide presentation were:

A review of the 6-quarter recession that began in 4th quarter 2007 and ended in March 2009. The speaker described this unusually long recession as “the greatest sustained loss of GDP since the Great Depression.”

She presented a comprehensive picture of unemployment. The official unemployment rate is calculated by dividing the number looking for work by the combined number of those looking and those working. This “official” unemployment rate was 5.0% in late 2007, rose to 7.8% by 2009, peaked at 10.0% and is now at 8.3%. She also made reference to “Unemployment Table U6,” which includes those who have given up looking for work and those “under-employed” who hold part time positions but seek full time work. That unemployment rate remains stubbornly high at about 15%, almost double the official unemployment rate. And to further show the magnitude of the job losses, she also showed a slide that stated the number of working people at the beginning of the recession was about 138 million and as of January 2012 is about 132 million, a loss of 6 million working people over five years.  This leaves a “labor force participation rate of 63.7%, the lowest in 29 years.

So what is being done about all this? The American Recovery and Reinvestment Act (ARRA), commonly known as the $787 billion dollar “stimulus bill.” ARRA was meant to be targeted, temporary, and timely. Tax cuts and extended unemployment benefits were quick, grants to state and local governments were also pretty quick, but the “shovel-ready” investments turned out to be not so quick.  Passed in February, 2009, 34% of the funds were actually spent in 2009; 74% by the end of 2010, and most of the rest in 2011. The effect of the stimulus is now “pretty much gone.”

Estimates of ARRA impact vary from creation of 500,000 jobs to 4.5 million.  Congressional Budget Office projects a range from 0.5 million to 2.6 million. The White House high estimate is 4.2 million jobs. The speaker believes between 1 and 2 million jobs exist because of ARRA that otherwise would not.

Unlike the past few recessions, government employment took and continues to take a hit, while private sector employment is growing again.

An important slide was called Okun’s Law, named for a Yale Professor Arthur Okun.  This slides demonstrates a high degree of correlation between GDP growth rate and unemployment rate. Her slide suggests that about 3% GDP growth is necessary to stabilize unemployment. She felt the fact that the plot point for 2011, which was brand new and revealed for the first time to the Old Guard, was “way off line,” in that the unemployment was going down too fast for 1.6% the GDP growth measured in 2011. As she put it, “too many people are being hired” for the amount of economic activity. She expects either GDP to be revised upward, or the unemployment rate to begin growing again. “Pessimistic” about the improvement in unemployment was how she put it.

Our speaker’s greatest interest is the impact of this on people.

45% of the unemployed are now “long-term” (meaning over 26 weeks). The outlook for such persons borders on dire, as labor economists know that those “first out” is usually “last in.” Skills deteriorate, but more importantly, attitude and self-esteem deteriorate, creating unknown social and healthcare costs going forward. Filing for permanent disability status is increasing rapidly as longest-term unemployed reach the end of unemployment insurance. The speaker believes that “humane” extension of unemployment benefits replaces, at an average of $300 per week, 90% of a single-breadwinner-household’s income AND it requires continued looking for work, which keeps the recipient “thinking like a worker” and not a dropout.

And a point she would no doubt have liked to have spent more time discussing is the relationship between education and earning power. She showed a slide with a clear acceleration in earning power once someone gets past 11th grade. Sadly, she said, the community colleges that do 90% of the college educating are suffering as state and local governments lose tax revenues and Federal support.
What’s ahead in the immediate future? The speaker expects that recent declines in the un-employment figure produced by the Department of Labor may reverse, unless GDP growth picks up to levels deemed necessary by Okun’s Law, and that risks from the global economy, specifically European debt issues and oil prices, could negatively impact the slow, steady recovery that began in March 2009.