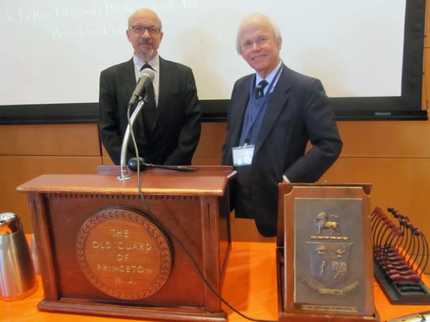 Speaker, Mark Wethli, and Introducer, Landon Jones
Minutes of the 20th Meeting of the 73rd Year
The Vice President presided. His performance demonstrated the great depth of Old Guard leadership.

Dr. Rojer opened the meeting promptly at 10:15 and made sure that all required formalities were dispensed with dignity and dispatch. To be particularly noted was the timely reading of the comprehensive Minutes of the last meeting by Jared Kieling, and the setting of a probable  attendance record for our youngest guest ever - a five week old among the 93 folk who attended. Due to the press of time, guests were asked to stand and be recognized. Guests included: Anne Seltzer, guest of Mitch Seltzer; Michael Curtis, guest of Judy Brodsky; Sarah Jones, Cassie Jones, and the aforesaid baby Wethli, guests of Lanny Jones; Mary Tiebout, guest of John Tiebout; Lincoln Hollister, guest of Sarah Hollister; James Steward, guest of Nick Wilson, and Art Bylin, guest of Charles Clark., who also led the invocation.

The Vice President called for a moment of silence to honor Cyril Franks.

The Speaker, Mark Wethli, an Art Professor and Department head at Bowdoin College, in addition to being a practicing artist and holder of four commissions to produce public art, was introduced by Lanny Jones. Professor Wethli’s subject was Public Art in American Communities. The Old Guard was fortunate, indeed, that one of our member’s daughters had the wisdom to marry such an able spokesman to bring us forward from the time when American public art  was primarily represented by sculptures of men on horseback in a public square.

Unfortunately the Old Guard Executive Committee makes no exceptions to its six minute limit on  Minute presentations. What follows therefore will be a grossly inadequate, brief, Minute of the primarily visual, thorough, and thought provoking summation of the field of American public art presented by an able practitioner and scholar. Fortunately for the Minute Taker, the Professor chose to cover only truly public art in America in the period from 1830 or so, but even with this limit, your scrivener was overwhelmed and is hard pressed to describe in writing what our learned speaker was able to present in words AND illustrate with very extensive projected images of what he was describing.

Mark Wethli believes that the proper purpose of public art is to make  viewers want more of it. By his definition public art is not something that you have to seek out - it seeks you out and should give you pleasure or insight each time you pass it by. To accomplish this goal its presenter must be aware of the setting and community customs and do no harm in presenting it. As an example of his hypothesis, he cited the contrast between the location of Richard Serra’s massive “Hedgehog and the Fox” near the Gehry Science Library and the stadium on the campus, and a similar massive slab of steel, “Tilted Arc”  of Serra’s, originally placed near a Federal Building in New York City. This location served to block the use of a public square by the Feds and was ultimately removed, whereas Gehry created a platform to view the Princeton Serra.

After reviewing his own career as an artist, presenter, commissionee and teacher, our speaker took the Old Guard on a breath taking and extensively illuminated romp through American public art.
Initially, he noted that we are fortunate to live in a community where there is public art on display almost everywhere you look which he illustrated with  examples of public art on the campus and in town. The Speaker was particularly impressed by the sculpture of the Chinese artist and activist Ai Weiwei which is represented by the Circle of Animals/Zodiac in the Scudder Plaza in front of Robertson Hall.

Professor Wethli cited and discussed public art examples from the WPA era,  e.g., murals in post offices. He noted this vast public enterprise served to educate and train artists from here and Europe in public art - an early GI Bill for public artists.

He elaborated on the various state and federal programs that require devoting a small percentage of the construction cost of public buildings to public art. The speaker commented that in many ways these programs permitted a golden era in the installation of American public art.

Professor Wethli then rushed on and guided us on an illustrated tour through many of the incarnations and forms of public art. We looked at art on huge oil tanks in Boston Harbor (No , the blue lines did not represent Ho Chi Min!); community and street art in Philadelphia, New York, and Los Angeles; monumental public art such as the striking Viet Nam Memorial as contrasted with the Korean War sculptures next to it in Washington; the World Trade Center sites - he was particularly taken with the use of massive spotlights to mark where the Twin Towers stood; the marvels of public art in the Millennium Park and elsewhere in Chicago; premium public art like the Cloud Gate and the Christo Central Park displays; projection public art displays in Columbus Circle and at the Michigan Museum; social public art such as the viewing station in the huge NYC Sanitation transfer station; lights on poles in the East River depicting conditions and locations in the river for the fish; the usurpation of a parking space to install sod and make a small park while feeding the meter; filling an abandoned mental institution in Boston with flowers and then distributing the flowers to patients in other mental institutions; environmental public art which resulted in planting several acres of the landfill for Battery Park City with wheat and distributing the seeds around the world. Our speaker closed with the example of the mill town in Sweden which commissioned the building of a structure to house works on paper and then burned it all down as a way to stimulate interest in art.

Along the way we discussed issues such as who owned public art and how to care for it, and the fact that public art does not have to be permanent and often isn’t.

Professor Wethli said that undoubtedly he should have included land public art as a category, but apparently had been advised by his father in law that he should finish his discourse in the 45 minutes allotted - and he did! The Old Guard benefited greatly from his exposition of a subject not often thought about, but frequently seen.

The Vice President did his duty and closed the twentieth meeting promptly at 11:30.