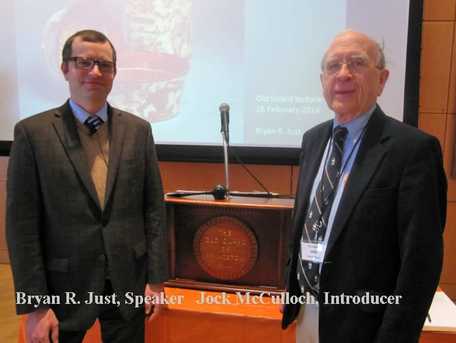 Jock McFarlane introduced the speaker.  He was Dr. Bryan Just, the Peter J. Sharp Class of 1952 Curator of Art of the Ancient Americas in the Princeton University Art Museum, and Professor in the Dept. of Art and Archaeology of Princeton University. Dr. Just earned his B.A. and M.A. at Yale and his doctorate in art history at Tulane University.

Dr. Just’s lecture was originally entitled “New Ways of Seeing Old Things: Mayan Art in the 21st Century,” but his talk actually focused on the history of scholarly research on the understanding of Mayan Art. He began by noting the exceptional degree of naturalism in Mayan Art, particularly in the way that the Mayan artists rendered human forms and other objects.  Geographically, the Mayans lived in southern Mexico, and in Guatemala, El Salvador, and Honduras.  The Mayan civilization was manifest in dozens of small city-states or little kingdoms, often with continuing dynasties.

Dr. Just noted that the analytic study of Mayan art is a relatively young field of scholarly endeavor.  He divided the history of research in this field into three periods, based on the material that was available at different times. The 19th century research was dominated by the study of the small number of books that have survived from the ancient Mayan world. In the 20th century, scholarly work focused on stone monuments, such as the stelae and pyramids and other structures in places like Palenque in Mexico and Tikal in Guatemala. But more recently, in the 21st century, analysis of the painting on ceramic vessels has been the principal focus of research in this field.

​The earliest attempt to decipher the Mayan hieroglyphics or “glyphs” was made by the German Alexander Humboldt in 1810 and the French scholar Constantine Rafinesque in 1822-32. They studied the glyphs in various Mayan books, and determined that the various glyphs and dots and bars represented numbers. Later scholars with more sophisticated mathe- matics and astronomy were actually able to predict lunar and solar eclipses.

In the late 19th century, photography enabled explorers and archaeologists to go into the rain forest and bring back for analysis a photographic record of the pattern of glyphs and imagery on a number of Mayan monu- ments.  A picture developed of a civilization with specific kings and dynas- ties, a culture of maize and chocolate, military conflicts, and sometimes human sacrifice.  Some of the glyphs represented phonetic sounds, and specific animal creatures such as jaguar, cat, and iguana.

Dr. Just showed an interesting diagram of the political interactions among the various independent kingdoms, including some friendly relationships and other lines of competition or conflict.

In the late 20th and early 21st centuries, Dr. Michael Coe was one of those who led the field. He publicized new understanding of the glyphic language in exhibits in New York and in Princeton. He and others made use of the new technique of rollout photography, which allow an object to rotate while being photographed, so that long pictorial strips can be pro- duced from the outside surface of cylindrical vessels, such as drinking cups and small pots. Some of the analyses were made by David Stuart while he was still an undergraduate at Princeton.

Many of the images studied are objects owned by kings, or perhaps by princes who had received them as gifts. Only 15 distinct Mayan painters have been identified, but as many as 115 different sculptors. Dr. Just also alluded to his fine 2012 exhibit of pottery from the Ix (pronounced “Eek”) kingdom in Guatemala.

In summary, Dr. Just described the evolution of knowledge of Mayan art, based in subsequent eras on the analysis first of printed books, then of carved or sculpted monuments, and more recently, of painted ceramics.

In the question period, it was brought out that the study of Mayan imagery and glyphic writing has enhanced our understanding of Mayan civilization including their concepts of power, and life in their various courts.

Another questioner asked if there were many more Mayan objects to be studied. Dr Just noted that exploration and excavations continue, some with the support of the Mexican government, but many other objects are to be found in private collections.  An internet computer-based index of Mayan objects has been developed to facilitate scholarly research.