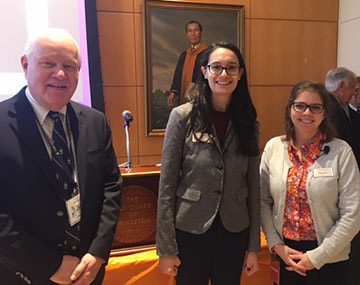 Minutes of the 21st Meeting of the 78th Year

John Cotton introduced the speakers, Izzy Kasdin and Hannah Schmidl, and their project, "Voices of Princeton." Kasdin and Schmidl described their oral history project as a collaborative effort launched by the Princeton Public Library, the Historical Society of Princeton, the Arts Council of Princeton, and the Witherspoon-Jackson Historical and Cultural Society.

They explained their desire to create an infrastructure and resource center for the numerous oral history projects that were occurring in Princeton.

Kasdin explained that oral history is both a process and a product. She defined it as preserving and interpreting the voices and memories of people, communities, and participants in past events. It is the oldest type of historical inquiry, predating the written word, and one of the most modern, initiated with tape recorders in the 1940s and now using 21st century digital technologies.

Schmidl clarified that oral history is not “better than regular history.” However, it is constructed by the subject, before being recorded, and the interviewer may ask questions to shed light on a certain perspective of a story. There are also issues of memory, restricted access to interviews, and who is doing the interviewing.

Oral histories gain value when they are used as primary sources in conjunction with other primary sources. The power of oral histories lies in how they capture the voices, stories, and perspectives of individuals and communities that might not be otherwise represented in traditional sources or history books. They give “voice to the voiceless.” Written historical documents often did not document the experiences of marginalized or minority communities. In Princeton, for example, the Princeton Herald, a local newspaper, only listed, in its Church Announcements, the services for white Protestant churches, ignoring African-American churches, Catholic churches, and synagogues. Oral histories help to repair this gap in the records and can provide rich detail about the lives of ordinary people. It has the power to engage people because it is emotional, relatable, and impactful. Oral history forces us to think about the past in human terms.

Schmidl shared with us some examples of oral history projects taking place across the country. She cited the Veterans History Project, the United States Holocaust Memorial Museum, the Brooklyn Historical Society, Queer Newark, and StoryCorps.

Schmidl told us how the Voices of Princeton project began. The Library pursued a grant for an oral history project from StoryCorps. Although it was unsuccessful, interest remained high for a project to collect, share, and archive the stories and memories of Princeton.

"Voices" was launched and is comprised of two initiatives: 1) one-on-one interviews, and 2) a partner-project clearinghouse.

Kasdin described the administrative challenges in doing oral history including consent forms, production issues, and cataloguing. She also described the interview process, which takes place between two individuals who know each other engaging in a structured conversation.

Six key questions about Princeton are addressed in each interview.
Consulting on partner projects is another component of "Voices," which serves in an advisory role to local organizations who may wish to embark on an oral history project. An example of this effort was with UNOW, the Princeton University NOW Day Nursery, founded in 1970 by the Central New Jersey Chapter of the National Organization for Women. Voices of Princeton has also worked with Princeton University on "A River Runs Through Us" and "American Agrarians."

Schmidl called attention to the Voices of Princeton web page, on which stories are posted. She showed various video clips from the website.

Finally, Kasdin called for members of the Old Guard to consider becoming interviewees or volunteers for the project, and to recommend groups that might be appropriate partners for "Voices."

Schmidl invited the Old Guard members to attend two upcoming Voices of Princeton programs at the Princeton Public Library. On May 6, Emily Mann, McCarter Theatre Center’s Artistic Director will be in conversation with the Tony Award-winning Mara Isaacs. On May 21, there will be a multi-media exhibit, UNOW & Then, marking the 50th anniversary the University NOW Day Nursery.

Several questions were asked, including whether the interviews are available on podcasts, how the program was being marketed, and whether any of the recordings are edited.