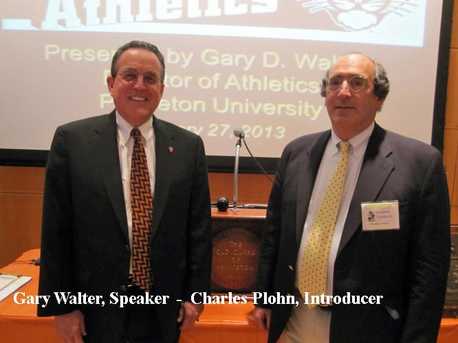 Minutes of the 19th Meeting of the 71st Year
President Ruth Miller called the meeting to order at 10:15 a.m.
Don Edwards led the invocation.
Minutes of the Feb. 20 meeting were read by Bob Comizzoli.
There were two guests: Bill Coleman introduced Pete Loser, and Eliot Daley introduced Alan Dybvig.
Seventy-seven members attended.
President Miller announced that next week there would be a hospitality hour in the Friend Building.

Charles Plohn of the “great” Class of ’66 introduced our speaker as Gary Walters, director of athletics at Princeton for the last 19 years and a member of the Class of ’67. Walters interrupted Charles, and sounding a lot like Bob Newhart, made the correction that he was a member of “the greater” Class of ’67. Not long after, Walters exhibited his school spirit, lifting a leg with some elasticity and showing off a jet-black sneaker with DayGlo orange laces.

Walters has been “a very successful athlete, coach, businessman, athletics administrator and an NCAA leader,” Charles said. In high school in Pennsylvania, he was a star basketball player at Reading High School on a team coached by his history teacher,” who happened to be Pete Carril, ultimately the most victorious coach in Ivy League basketball history and a member of the Basketball Hall of Fame.

Walters, a psychology major at Princeton, at 23 became the youngest head basketball coach in NCAA history.

It probably didn’t hurt his career that as a sophomore in 1965 Walters played alongside three-time All-American Bill Bradley on the team that reached the Final Four and that as a senior in ’67 he led Princeton to a No. 5 ranking in the final national poll. In February of his senior year, Gary and his teammate Chris Thomforde, now president of Moravian College, were featured on the cover of Sports Illustrated. Charles noted that that issue was “prominently displayed in every barbershop in town.”

Walters, the son of a welder and a homemaker, set the stage for his discussion on “Education Through Athletics” by personalizing his address. His life could be defined as a Horatio Alger story but Walters sees himself more as Harry “Rabbit” Angstrom in Updike’s “Rabbit, Run,” saying that that “was basically the life that I lived and he captured that moment just fabulously.”

As a boy, before a proper introduction to basketball, he played schoolyard games in Reading, a blue-collar city built on steel and textiles.  At recess on the first day of the second grade he and other pupils were playing with beanbags—since they were inexpensive and could be tossed around without causing mortal injury.

“I got this tap on my shoulder,” Walters said, “and it was Helen Wall, my second-grade teacher. She said, ‘Gary, you’re a good little athlete.’ It was then, he emphasized, that his teacher had “counterintuitively hooked me on the life of the mind because there wasn’t one thing that I would ever do to disappoint her.”

From that moment on, he said, “I became tracked” and added that he was fortunate along the way to have had incredible mentors.

Coach Carril became the most transformative person in his life, Walters said, adding, “He made me understand that my reach should exceed my grasp.”

While he felt relatively comfortable with his athletic ability, he said, “I didn’t feel worthy academically. I didn’t think I could measure up to the rigorous standards of Princeton—after all I was coming from a public school. I was in the first class at Princeton that had more public school students than private school students.”

Carril noticed Walters’ anxiety, observing that he seemed a bit uneasy in his new surroundings.

Carril wrote to Walters: “Princeton will not be too tough for you. Down through the years Humpty Dumptys have graduated from the place (He was always the master of left-handed compliments)…so you’re sure to do well.”

Walters apologized for making his presentation so personal but said, “I thought that it might inform the subject of ‘Education Through Athletics.’ I didn’t get accepted to Princeton on the basis of my academic merits, period. The fact of the matter is that as a student athlete who was a good player, that was a thumb on the scale.”

As a result of his experience as a player and as a head coach at Dartmouth and Providence, and then having been in management for a decade at Kidder, Peabody, he was asked as the newly minted director of athletics to strengthen ties between Princeton’s academic world and the athletic department. “I was going to hire only those coaches who could come in and have a transformative effect on the student athletes that are here,” Walters said.

Walters is particularly proud of the Princeton Academic-Athletic Fellows Program, a mentoring program at the university that connects athletes with 125 faculty and staff members committed to strengthening and advancing the student athlete ideal while reinforcing the educational mission of the university.

“We are the model in the Ivy League today,” he said, “for the integration of academics and athletics, and we have the structures in place to make sure that we are achieving those objectives on both ends.”

Ask a student athlete who is the most important person in their life, Walters said, and there’s a huge percentage who will tell you it’s the coach. Not surprising given the nature of the relationship.

Walters said: “If I’m doing my job and those coaches understand the values we’re trying to teach our kids--the core competencies, related to leadership, to understanding roles--then you’ll understand that education through athletics, that’s not just an aspiration, we are really practicing that.”

Walters took the program into overtime, which left the questions and answers sitting on the bench.