The Extraordinary Quest for a New Form of Matter 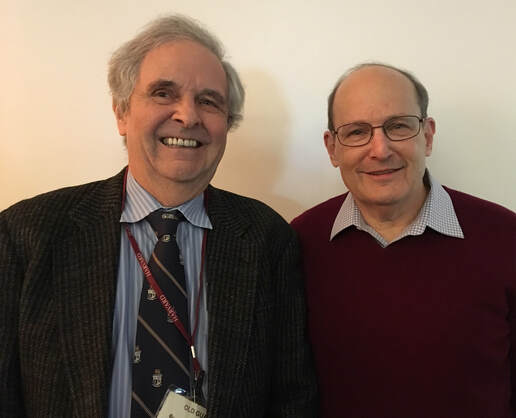 Minutes of the 20th Meeting of the 77th Year

​President Julia Cole presided over the meeting, which was held in the Community Room of the Princeton Public Library. Roland Miller led the invocation. The abbreviated minutes of the February 13 meeting were read by Ruth Miller (the February 20th meeting was cancelled due to inclement weather). There were three guests: John Hollister and Mike Eddy, introduced by Lincoln Hollister, and Alan Poritz, introduced by Deborah Poritz. The attendance was 98. Lincoln Hollister introduced the speaker.

Paul Steinhardt is the Albert Einstein Professor in Science and Director of the Princeton Center for Theoretical Science at Princeton University, where he is also on the faculty of both the Departments of Physics and Astrophysical Sciences. He received his B.S. in Physics from Caltech and Ph.D. in Physics from Harvard University. He was the Mary Amanda Wood Professor of Physics and Astronomy at the University of Pennsylvania before joining the faculty at Princeton University in 1998.

His research spans problems in particle physics, astrophysics, cosmology, and condensed matter physics. In condensed matter physics he and his student Dov Levine first introduced the concept of quasicrystals in 1983. Steinhardt is a member of the National Academy of Sciences. His many awards include the P.A.M. Dirac Medal (shared) as one of the three leading architects of the inflationary model of the universe, the Oliver E. Buckley Prize, the John Scott Award, and the Aspen Prize (shared) for his work on quasicrystals including the discovery of the first natural quasicrystals.

Professor Steinhardt’s talk is based on his new book The Second Kind of Impossible: The Extraordinary Quest for a New Form of Matter.

Why should we care about this? Because matter occurs in arrangements of atoms that fill space. Atoms hate gaps. So, at least before the quasicrystal era, matter was never known to form with five-fold symmetry. Atoms didn’t organize with icosahedral structures.

A possible loophole: Try tiles of two different shapes. Such tile patterns were studied earlier by Penrose in another context. A set of two tiles that can cover a floor without leaving gaps and do so non-periodically is possible. And ten-fold symmetry occurs in Penrose tile patterns.

This loophole offers an orderly arrangement that is orderly but not periodic, but quasiperiodic. Real atoms can be arranged in such a pattern, repeating with two different frequencies whose ratio is irrational, e.g., the golden ratio. The fundamental theorem of crystallography limits the symmetry of patterns only if the structure is periodic.

So in 1984 Steinhardt was opening up vast new possibilities of structures of matter and new materials with 5-, 11-, 17-fold  -- arbitrary symmetry. Steinhardt called the theoretical new materials quasicrystals – order without periodicity. Formerly only five patterns were possible in two or three dimensions – now there were an infinite number of new possibilities. A prediction was made of the characteristic electron diffraction pattern from a quasicrystal.

In 1982 Dan Shechtman, an electron microscopist at the National Bureau of Standards (NBS), was studying alloys of aluminum (Al) and Manganese (Mn). When he fired an electron beam into Al­­­6Mn, he saw something "impossible," an electron diffraction pattern of 10-fold symmetry, later found to match the theoretical prediction of Steinhardt. In 2011 Shechtman won the Nobel Prize in Chemistry for his experimental discovery.

If found in the lab, why was it never found in nature? Steinhardt eagerly took up the search.

An important step forward was discovery of a possible sample at the museum in Florence, Italy. Steinhardt tells of taking the sample to petrology expert Lincoln Hollister, who immediately questioned the presence of metallic aluminum, not known to occur in nature in metallic form.

Possible or impossible to pursue? A detective story: Where did the sample come from? How did it get to the museum? From a factory, a lab, missing people to be located, private diaries, KGB agents, and gold smugglers, Steinhardt eventually tracked the origin of the sample to the Kamchatka Peninsula at the easternmost edge of Russia and located the person who picked up the original sample.

We next see 2011 slide (“Here we are!”) of the 12-person expedition in the middle of nowhere: three Americans, one Italian, and eight Russians. The speaker described reaching the original sample location, traversing the tundra, and crossing the turbulent Khatyrka River in behemoth tank-like vehicles, evading enormous Kamchatka brown bears and battling relentless mosquitoes.
​
The expedition brought as much material as possible back to Princeton and Florence. Dark, shiny material in one sample exactly matched that of the original Florence museum sample. They had solved the detective story and traced back the origin of the sample - not in a lab, a smelter, or even on earth, but in space sometime between two and four million years ago, breaking off from a parent asteroid to ultimately arrive in Kamchatka as part of the meteorite Khatyrka.