Rivers Connect Us:  Protecting and Restoring Our Nation’s Rivers 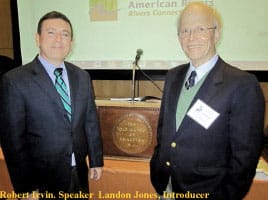 Minutes of the 22nd Meeting of the 70th Year
The ninety-one members present at the twenty-second meeting of the seventieth year of the Old Guard of Princeton were called to order by President Robert Varrin at 10:15 am. He commented that this is the first time since 1984 that the Old Guard has met on February 29th.

Landon Jones introduced Robert Irvin, President and CEO of American Rivers as the nation’s leading advocate for our rivers. Before he joined American Rivers last year, he was Senior Vice President for Conservation Programs at Defenders of Wildlife. He has also worked with the World Wildlife Fund and the Center for Marine Conservation. He has served as Majority Counsel for Fish & Wildlife on the U.S. Senate Committee on Environment and Public Works. Mr. Irvin graduated magna cum laude with a BS in Forest Science from Utah State University in 1980 and earned a law degree from the University of Oregon in 1983.

As an introduction to his talk, Mr. Irvin recounted a time in his childhood when he was on a cross-country trip with his family and saw the Glen Canyon Dam under construction. Only later did he realize that he was among the last persons to see Glen Canyon before it became Lake Powell.

American Rivers was founded in 1973 by a group of environmentalists as part of the great environmental awaking after Earth Day and the signing of the Clean Water Act a year earlier. Initially American Rivers was one man at a desk in Washington, D.C. Still headquartered in Washington, it has expanded to nine regional offices and additional field offices across the country

Our speaker reminded us of the importance and extent of rivers in our history, geography, health and recreation. Rivers served as our first highways and were of strategic importance in the wars fought on our soil.  The Mississippi Basin alone includes all or part of 31 of the lower 48 states.  Two-thirds of our drinking water comes from rivers. Recreational fishing contributes $188 billion dollars to the economy. Yet, forty years ago rivers were also places to dump sewage and toxic waste and famously to catch fire in Cleveland.

Mr. Irvin said the one thing that excites him about leading American Rivers is that he’s in a ‘sweet spot’ because his issue matters to everyone:  we all need water. A recent Gallup poll revealed that a supply of fresh water and stopping water pollution were top environmental issues. One major problem that continues is that sanitary sewer systems aren’t equipped to handle runoff after a major storm and the overflow ends up in a nearby river.  In addition, climate change contributes both to drought when it doesn’t rain and extensive flooding when it does. Most water systems in the US are over 100 years old and our infrastructure is in need of major repair.

So what work does American Rivers actually do?

Clean water:   Water Quantity: River Protection: River Restoration:Mr. Irvin’s closing remark was that although we do a lot of things to mess up the environment, nature is amazingly resilient.  If we’re smart enough to give nature a chance, it will come back.

(An abbreviated version of these minutes was read at the meeting on March 7, 2012)