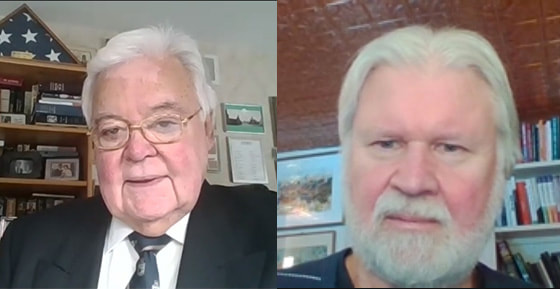 George Bustin, Introducer, and Douglas Massey
Minutes of the 18th Meeting of the 79th Year
​President Stephen Schreiber presided over this virtual 18th session of the Old Guard’s 79th year, attended by 105 members and one guest. Len Berlik read the minutes of the previous meeting.

President Schreiber asked those in attendance to participate in an online poll to determine how many members intend to receive, are registered to receive, or have received vaccinations for COVID-19.

​George Bustin introduced our speaker, Douglas Massey, Henry G. Bryant Professor of Sociology and Public Affairs at Princeton University. With a distinguished career of scholarship focused on immigration studies, he has been elected to the National Academy of Sciences, the American Academy of Arts and Sciences, and the American Philosophical Society and is currently president of the American Academy of Social and Political Science. His most recent book is Brokered Boundaries: Constructing Immigrant Identity in Anti-Immigrant Times.

Professor Massey outlined statistically the history of immigrants crossing the U.S.-Mexico border since the 1940s; how the realities today differ significantly from earlier periods; and how the U.S. government’s own policies and interventions often trigger the immigration issues and problems we face.

First, he said, we should understand that undocumented immigration from Mexico is practically over. Since 2006, the number of undocumented Mexican immigrants coming into the U.S. is near zero while the number exiting the U.S. increased to 1.35 million between 2007 and 2016. Nevertheless, many who have been here 15-20 years are staying put and do not plan to return to Mexico.

Large influxes of Mexican workers to the U.S. from 1950 to 1965 were sparked by the so-called Bracero program established by Congress in response to requests from growers who needed immigrant labor to harvest their crops. The program provided these workers with temporary legal status. During its 15-year tenure, the number of undocumented Mexicans entering the country was quite small. However, when Congress shut down the program in 1965, the numbers of undocumented Mexicans seeking work in the U.S. correspondingly jumped up to levels comparable to participation in the former program and remained at those levels through 1985.

Today, Central Americans, not Mexicans, account for most of the undocumented immigrants arriving at or crossing the U.S.-Mexican border. The great majority are from only three countries: Guatemala, Honduras, and El Salvador. Many are coming for reasons that differ profoundly from those espoused by the earlier Mexican immigrants. Many present-day immigrants are not workers, but families or unaccompanied children. Professor Massey proceeded to explain what triggered this sea change.

In 1980, the left-wing Sandinistas seized power in Nicaragua and the U.S. decided to intervene by using so-called “contras” from Guatemala, El Salvador, and Honduras to fight them. Professor Massey categorized these three nations as the “frontline countries.” For comparison, he placed Costa Rica and Panama in a “non-frontline” category. He considered Nicaragua separately.

During the 1970s and earlier, emigration from all Central American countries to the U.S. was quite modest. Those levels have persisted down to the present day from Costa Rica and Panama. However, between 1980 and 1990, immigrants fleeing the U.S.-backed Contra-Sandinista conflict from the frontline countries and Nicaragua increased by about 13 times over pre-conflict levels. Though more than 11,000 Nicaraguans were given refugee or asylum status when they fled to the U.S., only a small number of others from the frontline countries were similarly legalized. Professor Massey commented that this reflects a disturbing pattern by the U.S. to legalize immigrants fleeing leftist regimes, as in Nicaragua, Venezuela, Cuba, and Vietnam, but not those trying to escape rightist autocracies.

In consequence, fearing for their lives and those of their children, families in Guatemala, Honduras, and El Salvador began to flee horrific conditions and seek entry to the U.S. Some sent their children alone. The result was a humanitarian crisis at the border. In mid-2019, 63.6% of apprehensions there by the Department of Homeland Security were families and 8.6% were unaccompanied minors.

It is not as if we had not managed similar crises in the past. The flight of boat people from Southeast Asia at the end of the Vietnam war generated a flood of refugees now incorporated into the body of the American population. Yet we are not honoring the needs of Iraqis who worked with our forces during our intervention there. We are not honoring commitments to Afghans who worked with us. Distressingly, it appears that we often mess up things in a way that produces refugees and then refuse to take them in.

In response to questions, Professor Massey responded that several sources, using several different methods, estimate that there are about 11 million undocumented residents in the U.S today. China and India account for the largest numbers of new undocumented residents, largely by overstaying their visas. About ten percent of Venezuela’s population has left the country, and we are taking in some, mostly well-educated, on a legal basis. It should be understood that crime rates among the immigrant population are lower than in the native population overall. Unfortunately, labor agreements are impeding efforts to reduce militarization of the border, and though there appears to be broad public support for immigration reform, it is not clear that this is sufficient, because of the filibuster rule, to win enough votes for reform in the U.S. Senate.