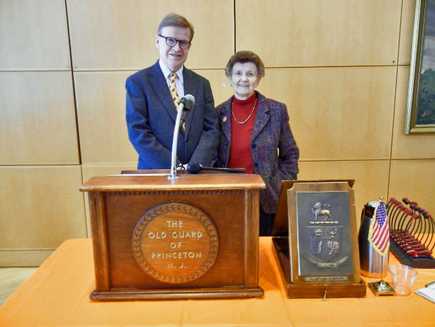 Harold James, Speaker Nancy Beck, Introducer
Minutes of the 17th Meeting of the 73rd Year
President Leach called the 17th meeting of the 73rd year to order in the Convocation Room of the Friend Center at 10.15 o’clock. Julie Denny led the invocation and John Timoney read his refreshingly minutes of the last meeting. Five guests were presented to the 123 members attending. A moment of silence was observed in honour of the late Arthur Morgan. Several announcements followed.

Nancy Beck introduced our speaker, Harold James, Professor of European Studies at Princeton and Professor of International Affairs at the Woodrow Wilson School.

Like George Kennan, Mr. James regarded the war of 1914-18 as the seminal event of the 20th century for two reasons. First, he dwelt on the far-reaching consequences – unforeseen consequences. It merits the title “the Great War” since it left us the legacy of Communism’s rise and Nazism and a Europe exhausted. Recent remarks in Europe and in Japan, noting the parallels between 1914 and 2014 have proved a shocker.

In addition to the millions of casualties, countries were divided one from one another in the breakup of three empires and the exhaustion of two others. By 1914, both the Central Powers and the Allies knew they were heading for some sort of conflict. But long-term warfare was going to be prohibitively expensive, so they sought quick fixes when war came – the Schlieffen plan to knock France out of the war quickly and the British naval blockade to starve out the enemy. Germany tried to get Mexico to attack the U.S. Early on, both sides tried to exploit Islam and the Arab hatred of Ottoman domination in order to provide the victory which conventional warfare was unable to deliver. The most successful example of this new way of waging war was the Germans dumping Lenin et al on the Russian Empire to foment rebellion.

Nations were also riven internally. Not surprisingly, the fear of internal enemies came to dominate Europe in the 1920s.  If such deepened the culture of secrecy then, what is the effect of China’s economic and cyber potential on our secrecy and surveillance culture of today?

The speaker called attention to the background of changing relative economic power. Britain’s economic dominance gave way to Germany and America in the new century. In the 21st century, we behold America, which had financially dominated the second half of the 20th century, being overtaken by emerging markets, particularly China. If changes in industrial power exacerbated 1914 rivalries, does that have something to say to us?

The second alarming  aspect  is the speed with which the conflict grew.  What started as a Serbian assassination soon activated a slew of treaty obligations and Russia’s mobilization set the ball rolling with astonishing speed. Does that matter to us - that big oaks from little acorns grow, and quickly? Several questions followed Harold James’s stimulating talk, and the meeting was adjourned at 11.30 a.m.
​
Respectfully submitted,
John Frederick