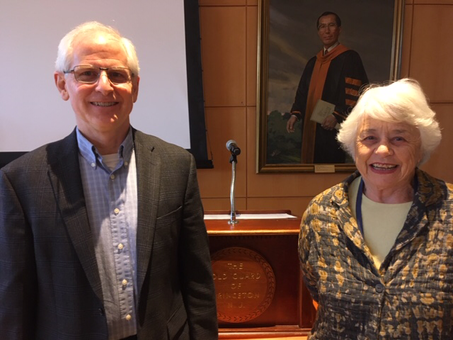 Minutes of the 18th Meeting of the 78th Year

On February 5th, at the Convocation Room, Friend Center, Princeton University, Julia Coale presided, Anne Seltzer led the invocation, and Robert Fraser read the minutes of the preceding meeting. There were two guests: Sydney Taggart, introduced by Charlie Taggart, and Helmut Weymar, introduced by Nancy Robins. The total audience present was 103. The members were sad to hear of the recent death of member John Hanna and a moment of silence was held in his memory.

The speaker Richard Moss, introduced by Ruth Miller, is the Gerhard R. Andlinger Visiting Fellow in Energy and the Environment at Princeton University. He is on leave from the Pacific North West National Laboratories Joint Global Change Research Institute. Dr. Moss, whose distinguished academic career includes a Ph.D. from Princeton’s Woodrow Wilson School, began by introducing the 4th National Climate Assessment, its focus on managing the impact of the climate changes (including coastal transitions) that are occurring, and the need to incorporate climate risk in planning public services. Recent research concludes that coastal zone management is already a challenge and, although sea level rise estimates are increasing, there are options for managing risk but no magic bullet or simple solutions.

A major factor, which has nothing to do with climate change, has been the rapid increase in the U.S. coastal population, estimated at 125 million, with a GDP larger than every country bar China and the whole United States. There are now nearly 50 million housing units within one-eighth of a mile of the sea, with a $13 trillion insurance value (although prices of houses in coastal areas are now appreciating at a slower rate than houses elsewhere).

Dr. Moss noted that with more development in harm’s way, the damage from hurricanes and tidal flooding has increased rapidly in recent years. Of particular concern is the fact that about 60% of Superfund sites, such as the former American Cyanamid facility, only 600 feet away from the Raritan River, here in New Jersey, are threatened by extreme weather conditions.

Dr. Moss posed the question of why there is so much development in these risky coastal areas. He concluded that such areas generally are assumed to be safe, and that federal disaster programs and the National Flood Insurance Program (now some $36 billion in debt) have increased massively since Hurricane Katrina, absorbing much of the cost of the damage, to say nothing of federally funded beach renewal programs encouraging oceanfront building and shifting risks to taxpayers.

Dr. Moss also noted that recent estimates of global sea levels continue to rise (10% since 2013), and these estimates for the northeastern United States are twice the global average. The most likely scenario for New Jersey is an increase in sea level of 1.4 feet by the year 2050. Although significant, he pointed out that the sea level had risen in the state by about the same level in the period 1911-2019, so the problem is probably manageable, although still serious. He also forecasted that coastal flooding is likely to increase because there will be more and larger tropical and extra-tropical storms and increased tidal flooding.

He concluded that there are three sets of options to reduce these impacts:
​Dr. Moss concluded by summarizing what could be learned from two recent disaster recovery efforts following Hurricane Sandy and the 2015-17 hurricanes. The reaction of states has varied greatly but to date states have not taken full advantage of the federal funds available. The best way to proceed would be to use best practices for planning and civil engagement and to use the findings of climate science to consider the viability of various options over time.

A question and answer session concluded the meeting during which Dr. Moss was able to reassure the Old Guard that the massive meltdown of the Antarctic ice flow that would make Princeton a coastal community was very unlikely.