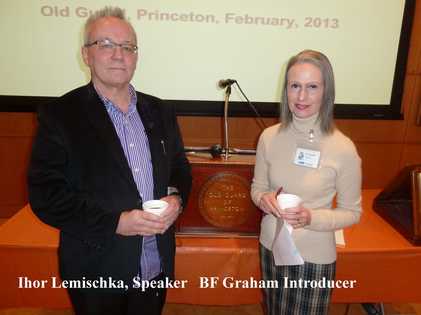 Minutes of the previous meeting were read by Keith Wheelock.

t was announced that next week’s speaker will be Dr. George Hun- singer, Professor of Theology at the Princeton Theological Seminary.  His talk Is entitled “The National Religious Campaign Against Torture.”

B.F. Graham introduced the speaker, who was  Dr. Ihor Lemischka, who is Director of the Black Family Stem Cell Institute [and Professor of Pharmacology] at the Mount Simai Medical Center. Dr. Lemischka earned his B.A. [in Biology] at Johns Hopkins, and his Ph. D. at MIT, where he also did post-doctoral work. He taught in the Molecular Biology program at Princeton [from 1986 until 2007], when he came to Mount Sinai to head their Stem Cell Institute. His topic was “ Stem Cell Research:  Breakthroughs, Promises, Battles, Myths, and Medicines.”

Dr. Lemischka expressed his enthusiasm for the promise of stem cell research:  “I’ve never been more excited than now,” he said.

He began with some definitions: A stem cell is a single cell with the capacity of self-renewal, by dividing into daughter cells; and with the potential to differentiate into a variety of specialized cells….  An important distinction is between adult stem cells and embryonic stem cells;  they are fundamentally different.  Examples of adult stem cells are the cells of blood and bone marrow, of connective tissue, of the nervous system (neurons), and of other organs such as skin, sperm, gut, liver, heart, and kidney.

To explain embryonic stem cells, Dr. Lemischka showed how the zygote (composed of the union of sperm and egg), develops, [after 5 days,]  into a blastocyst, which is a cluster of 70 to 100 cells.  The blastocyst then evolves into an embryo, which further evolves into organs (such as blood, mesenchyme, and nervous system), which initially contain adult stem cells. The cells of the blastocyst can be harvested and grown in vitro as embryonic stem cells, capable of differentiating into more than 200 different cell types.

Dr. Lemischka  alluded to the “Stem Cell Wars.” George W. Bush allowed limited funding for stem cell research, trying to restrict such research to adult stem cells, or to the very small numbers of  lines of embryonic stem cells already in existence. [Proposals to increase the availability of embryonic stem cells were vetoed twice by President Bush, so for a time, federal funds were not available for meaningful stem cell research.]  However, under President Obama, beginning in March 2009, federal  funds are theoretically available for the production of new embryonic cell lines. However, NIH funds are severely depleted for this and other purposes.

The major thrust  of stem cell research at present is the production of personalized patient-specific  or disease-specific  embryonic stem cells.  For example, for application in “bubble boy” patients, whose own cells from birth  lack the ability to produce gamma globulin, the protein required to make antibodies to fight infection.

Dr. Lemischka  described  studies in which adult stem cells obtained from skin biopsies  were  modified by treatment with enzymes to induce the production of cells with the properties of embryonic stem cells; such methods are being explored in the treatment of neurological disorders such as Lou Gehrig’s Disease (amyotrophic lateral sclerosis).

[There is also research on the use of re-programming techniques, in which certain genes are inserted  in an effort to induce the stem cell derived from skin or blood cells to become pluripotent and function like an embryonic stem cell. Such methodology avoids the ethical  issues that relate to the use of stem cells derived from embryos.]

At the present time, stem cell therapy is of proven value only for hematologic conditions such as leukemia and lymphoma, sickle cell anemia, thalassemia, and immune deficiency. (I would add that an important area for current and future research is in the effort to achieve regeneration of nerve tissue in patients with spinal cord injuries. But I also know that efforts to regenerate heart muscle with stem cells, and to hasten the regeneration of skin in patients with extensive burns, have so far been of minimal benefit.)

Dr. Lemischka  noted the many false claims that have been made and publicized for the use of stem cells in the treatment of a variety of medical conditions, with resultant exploitation of the gullible public.  There are even “stem cell creams” for use on the skin! “Twenty-first  century snake oil,” he called it.

In concluding, Dr. Lemischka indicated his hopes for the future  of stem cell therapy. But he advised that the research effort should be focused on “low-hanging fruit,” on  diseases that are likely candidates for such treatment, and certainly not on neuropsychiatric disorders such as Alzheimer’s disease and autism.

In the discussion period, the very high, almost prohibitive, cost of stem cell therapy—about $100,000 per case—was noted. However, insurance companies and Medicare have paid for such treatment for approved indications  in selected cases. [It was also noted that the major center for stem cell research is in the United States, although some is being done in Japan and other countries.]