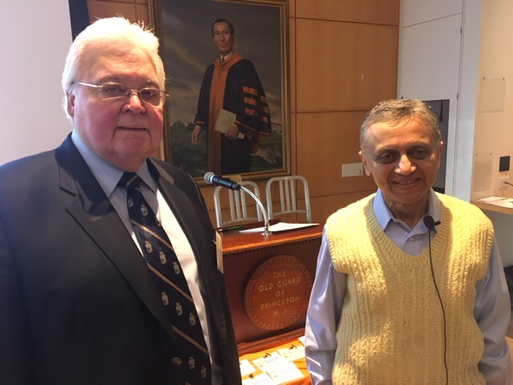 Minutes of the 18th Meeting of the 77th Year

​The 18th meeting of our 77th year was called to order at 10:15 a.m. on February 6, 2019 by President Julia Coale at the Friends Center, Princeton University. Following the invocation led by Joan Fleming, Priscilla Roosevelt read the minutes of our meeting of January 30th with Dr. Jeffrey Apter. President Coale thanked the Hospitality Committee for another month of treats and asked members to introduce their guests as follows:  Diane Garrett by Jared Kieling, George McLaughlin and Frank McNally by James Ferry and Sheila Berkelhammer by Gerry Berkelhammer. President Coale then announced that the next meeting of the Old Guard will take place at the Friend Center on February 13th at 10:15 a.m. The speaker will be Kim Lane Scheppele, Professor of Sociology and International Affairs at the Woodrow Wilson School on the subject “The Ruins of Constitutional Government.”

Following the opening proceedings, George Buxton introduced our speaker, Ashoka Mody, visiting professor of international economic policy at the Woodrow Wilson School since 2012 and a former staff member of the International Monetary Fun (IMF) and World Bank, who spoke on the subject “Europe in Turmoil” based on his recent book “Euro Tragedy: A Drama in Nine Acts.”

Professor Mody began by noting that the European Union was created to assure peace and democracy in Europe. Being trading nations, the E.U. went astray because their economies move with world trade, which today is driven by China. In 2017, China was injecting stimulus into its economy; as a consequence, Germany, France, Italy, etc., also grew. In early 2018, China removed its stimulus; when its economic growth slowed, world trade slowed, as did the European economy.

Professor Mody presented a chart showing this trade pattern, dominated by the largest trading country, has existed for 150 years. In recent years, Europe’s ability to grow has further diminished, compared to some other countries, because Europe has lagged technologically. A chart comparing Germany to East Asia showed that Germany, with its old industrial base and such industries as pharmaceuticals, has grown only moderately in comparison to the new wave of electronic technology and automation in such countries as South Korea. Also, technological education is a factor; East Asia has some of the world’s best high schools, while, with the exception of Oxford and Cambridge, Europe has none of the world’s top universities.

Even if there had been no E.U., European countries would be facing a number of common problems. Like part of the U.S., there is broad social and political angst. France is an example, where the working classes, farmers, and less educated clash with the educated professionals and managers.

Adding to this is what Professor Mody calls the European albatross. In a system that is economically weak and socially divided, the Euro adds to the problems because a single currency requires a single monetary policy, and a single policy will always be a case of one size for none. The Euro will always be too strong for a weak Italy and too easy for a strong Germany. As a consequence, trust and support has declined, there is division between the northern and southern countries, and public resentment has grown as monetary decisions are made by an administrative state not responsible to the people.
To illustrate his theories, the professor also discussed the economic and political problems of Italy and presented several charts illustrating Italy’s lack of growth and productivity. He indicated that Italy should devalue its currency against the German, Dutch, and U.S. currencies in order to use its capital and labor more efficiently and sell its goods more cheaply. However, Italy is constrained by a single currency and a single, relatively tight monetary policy. Italy’s trap gave his book its title. Not this year, but perhaps in five to seven years, Professor Mody believes there will be a gargantuan crisis played out in Italy that will have wide ramifications on the world economy and pull down the Euro.
​
Professor Mody expanded on these views during the question period but, with the exception of his high praise for Margaret Thatcher and her policies in dealing with the E.U., he was reluctant to answer several questions about European geopolitical issues that he felt were outside his expertise.