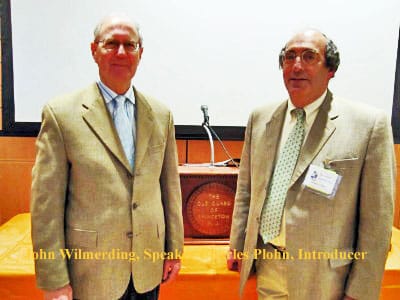 Minutes of the 19th Meeting of the 70th Year
President Varrin opened the19th meeting of the 70th year with 106 in attendance.  Donald Edwards led the invocation. Nancy Beck read the minutes from the prior meeting. Guests introduced were:

Charles Plohn introduced John Wilmerding, who spoke on Frederick Church in Maine. Mr. Wilmerding was born in Boston and educated at St. Paul’s School in Concord, NH and at Harvard where he took three degrees culminating in a PhD in 1965. He has taught art and art history, and administered art and humanities departments at Harvard, Dartmouth, and Princeton. Now Chair of the Board of the National Gallery of Art, he has served variously as curator, in administrative roles, and as director or Trustee at the National Gallery, the Metropolitan Museum of Art in New York, The Guggenheim Museum, and the Princeton University Art Museum. His major gifts of art works have benefited the National Gallery, the Metropolitan Museum, the Princeton Art Museum, and the Shelburne Museum in VT. He serves as a Presidential appointee on the Committee for the Preservation of the White House.

Mr. Wilmerding’s presentation was derived from his curatorial work and catalog for a forthcoming exhibition to be presented from Olana, Frederick Church’s home overlooking the Hudson River.  The exhibition, will open in Portland, ME this summer, make one or more appearances in other cities, and be at Olana in the summer of 2013.  It features Church’s work in Maine centered largely on Mt. Desert Island on the coast and the Mount Katahdin region inland.

Church was born in Hartford, CN in 1826 into a family that had been in the area since the 16th century and was ardently Unionist. This accounts for Church’s deep concern with the north/south tensions growing in the nation during his early life.  A gifted draftsman from the start, he was apprenticed through the good offices of Wadsworth of Hartford to Thomas Cole, the founder of American landscape painting beginning about the time of Church’s birth. Cole, an Englishman, brought to the celebration of the American landscape English ideas and conventions like the notions of the overwhelmingly powerful quasi-male “sublime”, the quasi-female “beautiful”, and in between the “picturesque.” Church spent the years 1844 to 1846 as the only formal pupil Cole ever took on.  In the summer of 1844 Cole, whose interest centered on the Hudson River, decided to visit Mt. Desert Island for the first time, having heard it praised by other artists as the sublime and beautiful quintessence of the American landscape, and he returned home with books full of sketches for paintings to be done in the studio. (Incidentally, Wilmerding found in the Princeton Art Museum these original sketchbooks, which had been acquired early in the 20th century by Frank Jewett Mather.) Church was deeply impressed with all of this, and his talent so quickly developed that when Cole died young in 1848 Church succeeded him as de facto head of the Hudson River School of landscape painting.

In 1850 Church made his own first visit to Mt. Desert Island, and went eight more times in the next decade. Beginning by visiting virtually all the sites of Cole’s sketches, he used the newly available cadmium colors put up in metal tubes, which permitted hot reds, pinks, yellows, and oranges in grand scenes of twilights, sunrises and sunsets, creating almost lurid colors. His quick sketches evinced an almost scientific interest in meteorological, geological, and botanical detail and were accompanied by detailed notes on time of day, colors, and the like. From these sketches Church worked up a half dozen or so large exhibition quality paintings displaying his superb drawing skills and expert brushwork that he varied in ways appropriate for each element—water, rocks, sky, fog, etc. The finished paintings incorporated Cole’s invented landscapes combining the sublime and the beautiful in the same work, but presented nature more realistically than Cole’s more generic renditions.

In 1853 Church painted inland Maine around Mount Katahdin, emphasizing western looking sunsets suggesting the nation’s interest in the developing west and a sense of the end of a great day with more to come on the morrow. These continued to combine sublime scale with invented beautiful elements of domestic rural life showing the perfect balance of man and nature which was about to disappear with the dramatic transportation and industrial growth just starting to take off.

As Americans became convinced that the north/south tensions would end in conflict, Church’s work took on a nationalistic tone, his sunsets seeming to allude to the transience of light and nature.  Influenced by Darwin’s work abolishing the idea of a benign and constant nature, Church pushed his colors to the edge of dissonance, implying dramatic and perhaps apocalyptic change and a spiritual crisis. His 1862 wartime work on Mt. Desert incorporated imagery of nature in strife and turmoil rather that at rest.

After the war, with Church now a married man, having suffered the tragic loss of two children to diphtheria and developed the Olana property, he did not return to Maine until the late 1870’s when his work was inland around Mt. Katahdin with emphasis on the land as a place of pleasure and relaxation. The nationalist dimension had passed as had the extreme specificity and range of detailed brushwork, due in part to the osteo-arthritis affecting his hands. His late work seemed almost autobiographical as he worked with Olmstead and Vaux developing Olana’s views and landscape vignettes as a kind of painting in three-dimensional reality.