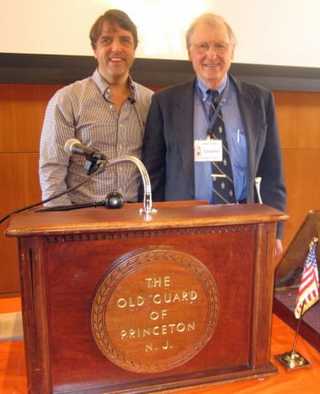 President Leach announced the forthcoming spring program of speakers, and complimented the Program Committee for their fine work in arranging the program. He also noted that Diana Crane is updating the history of the Old Guard, and she would like to know when the tradition of Old Guard neckties was introduced.

Then we were treated to an Old Guard first. The speaker was intro- duced by his father, an Old Guard member, Charlie Clark, who introduced his son, Dr John Clark. Dr Clark grew up in Princeton, attended public schools here, and, after a year in Ecuador with the America Field Service, went on to the University of Vermont from which he was graduated cum laude. He then served for three years as a Peace Corps volunteer in Ecuador. He stayed on in Ecuador for another year on a grant from the National Geographic. Dr Clark then acquired his doctorate in biological science from George Washington University. Since then, he has been at the University of Alabama, where he is now an Associate Professor.  He has 60 publications in the field of botanical science.

Dr. Clark’s title was “Plant Exploration in the New World Tropics.”
It was based on his many years of research in Ecuador and in several other Latin American countries.

Dr. Clark noted that in the small country of Ecuador, there are more than 18,000 plant species, slightly more than the number in the much larger United States. He showed contrasting maps of the areas of green vegetation in Ecuador in the 1950’s and today.  In both maps, there were large areas of green, indicating vegetation, in the east, the area of the Amazon drainage system.  Farther west is the large north-to-south Andes mountain range, shown in brown.  West of the mountains and toward the Pacific coast is a hundred mile wide area which in the earlier time was full of vegetation, shown in green.  But the present map shows that the area of green vegetation has shrunk to small patches in the northwest, primarily as a result of deforest- ation, but also related to population growth and the increase of farm land in that area.

Dr Clark’s photos documented conditions in Ecuador.  In the back country where he did his explorations, there are virtually no good roads; the road beds are muddy most of the year.  But for two months a year, the rain is gone, the roads dry out, and the loggers come in to remove mahogany and other trees.

There is extreme poverty among the native population in the back country.   But conditions are slowly improving; schools are coming in, and some of the natives are creating and selling craftwork to supplement their income.

The explorations of Dr Clark and his assistants, many of them students, were initially done in rather primitive conditions, with no running water at first.  They had to combat a variety of tropical diseases.  Another danger was posed by the hundreds of land mines along the border between Ecuador and Peru.  Dr Clark’s group recognized the need to work with the community, to enlist natives in their work, and to build relationships among the indigenous peoples.

Dr Clark’s group collected hundreds of different plants, and they identified more than 40 new species.  Many were published in a variety of botanical journals..  A couple of the newly identified species were given the species name of Dr John Clark.  The plant specimens were photographed, dried, and distributed to museums in Ecuador and the United States.

In tropical Ecuador, many plants grow to much larger size than their relatives do in more temperate climates.  [For example, Dr Clark showed us a species of milkweed which was about 20 feet tall.]

We were shown multiple examples of exotic plants, many of which had not been previously identified.  Traditionally, plant classification has been based primarily on morphology, but nowadays molecular characteristics and DNA technology are also used.

After the conclusion of his talk, there was time for several questions.  One questioner asked about the possible effects of global warming on plant life.  Dr Clark replied that their research really did not see evidence of such an influence. A much greater factor at present is the effect of deforestation on vegetation in many places in the world.

Another questioner wondered to what extent Dr Clark’s knowledge of the enormous diversity of plant life and the evidence for evolution affected his belief in the existence and influence of a divine creator or God.  Dr Clark noted that his work is based on the acceptance of an evolutionary process which must have taken millions of years.  Without further describing his personal views, he referred us to the work of the noted Harvard biologist.

E.O. Wilson, who is an agnostic. Dr Clark also went on to note that at the University of Alabama, where he teaches, the whole concept of evolution is rejected by the evangelicals, even the students of biology.