On the Beautiful Blue Danube:
The Life and Times of the Viennese Waltz 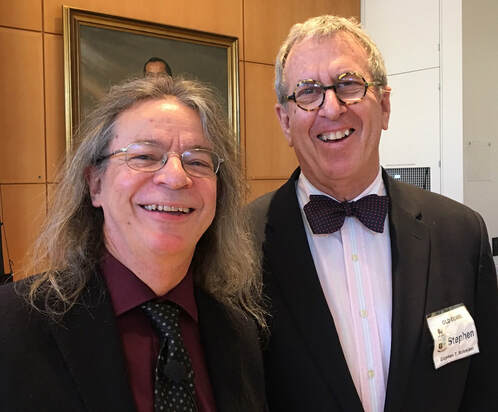 Minutes of the 22nd Meeting of the 77th Year

President Julia Coale called the 22nd meeting of the 77th year of the Old Guard of Princeton to order on March 13, 2019. Julia Denny led the convocation. Ruth Miller read the minutes of the previous week, “The Gerrymandering Project,” by Sam Wang, Princeton professor of molecular biology and neuroscience.

A total of 117 members and guests attended.

George Bustin announced that Sam Wang’s Gerrymandering Project needed funds in order to complete its mission. Information on how and where to donate would be available at the end of the meeting.

Stephen Schreiber introduced the speaker, Scott Burnham, Princeton University emeritus professor of music, and his talk “On the Beautiful Blue Danube: The Life and Times of the Viennese Waltz.”

Burnham began by describing the annual New Year’s Day Vienna Philharmonic concert which has Johann Strauss, Jr.’s waltzes “as its heart.” To begin the encore, the orchestra plays just the first chord of the Blue Danube Waltz, which is instantly recognized and applauded.

The waltz took hold in the nineteenth century. The name came from the German word “walzen,” which means to rotate or turn. To some degree, it is a revolt against the aristocratic, stylized French minuet. Burnham played a stately example by Hayden.
The waltz is related to the Bavarian landler, an outdoor peasant turning dance, where the man often stands and claps, and the woman turns. The dance, rather slow with an um-pah-pah beat, often ends with a “titillating cheek to cheek” embrace. Burnham played examples, one by Mozart, which was rather mechanical, and another by Beethoven, which was more regular and harmonious.

The 1880s was “the high water mark of the Viennese waltz” and Strauss, Jr.,  was the “king.”  Burnham played excerpts from “Tales of the Vienna Woods” to demonstrate how triple time produces the “Vienna lilt” and the “slightly off-balance quality which compels dancers into moves.”  Burnham described the waltz’s relaxed quality as very unlike Beethoven’s thrumming “get-in-a-car.”

Waltzes can repeat and transition into other waltzes, forming “chains of waltzes” that might end with a coda. These suites often became concert pieces.

The heyday of the waltz began with “The Blue Danube” (1866), which strings together several waltzes, each becoming more animated, and ends with a coda. Burnham described how Strauss “sets the table,” beginning the “Blue Danube” with a very familiar shaded chord, hinting at things to come. “Tales of the Vienna Woods” (1868) begins with drums that proclaim, “we’ll be dancing soon,” and adds birdlike sounds and a zither playing something like a landler before the waltzing begins in earnest.

Strauss’s last great composition, “The Emperor Waltz” (1888), celebrated the 40th anniversary of Kaiser Franz Joseph’s reign, a high point for both the composer and the honoree. Soon after, the Kaiser’s empire crumbled. Strauss, who did not write any more significant pieces, died ten years later.

"The Emperor Waltz” begins with a march, followed by a solo cello that changes from double to triple time and begins a waltz. Burnham jumped to the third waltz and its B section with a “self-important beat.” A later, moving version of the first waltz is almost nostalgic, “almost like saying farewell to the waltz itself.” The piece “goes out with a blaze of imperial glory… much like a farewell.”

Finally, Burnham played an excerpt from Ravel's rather scary “La Valse,” which Carl Schorske called a “frantic dance macabre.” Written in 1920, it reflected the very different life after The Great War. The glorious Viennese Strauss waltzes of the 1860s defined “a city, a culture, and an empire.”

Questions and comments included discussion of a South American version of the waltz, Hungarian and Polish influences, the use of the waltz mode in modern musicals, and the change in how the waltz is danced today.