The Wizard of Lies –
​Bernie Madoff and the Death of Trust 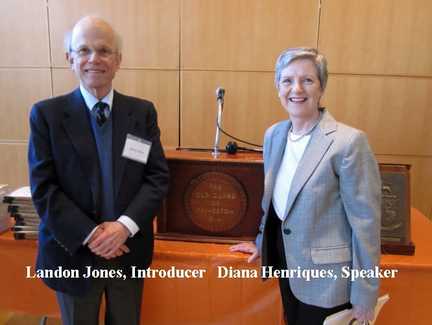 Minutes of the 21st Meeting of the 71st Year
Twenty-first Meeting of the Seventieth Year of the Old Guard of Princeton, NJ, held March 13, 2013, at the Friend Center on the University campus. One hundred twenty two members were present. The Meeting was called to order at 10:15.

President Miller presided. Mr. Fulmer led the invocation. Mr. James Livingston introduced his son who was stated to be with Oracle. Your reporter notes that this seems most appropriate for a lecture on Wizards.

President Miller announced that the very fashionable lanyard for use with the OG required nametags was being made available by the Treasurer at the SOGP of $3.

Landon Jones introduced the speaker – Diana Henriques – who is serving as the Ferris Professor of Journalism at Princeton and leading a seminar on the coverage of fraud by the media. Ms Henriques is a two-time finalist for the Pulitzer Prize and has served both the New York Times and the Times of Trenton, among others, in her career in journalism.

Professor Henriques is the author of a 400+ page book entitled The Wizard of Lies – Bernie Madoff and the Death of Trust which was the basis for her presentation to the Old Guard. The reader is directed to the foregoing to answer any questions arising from these minutes.

Our Speaker opened with a classic understatement that she had “a lot to cover”. Her talk masterfully led us through the interstices of the greatest ponzi scheme ($60 BILLION) in history perpetrated by Bernard Madoff. She also discussed its impact on the importance and place of trust in our financial dealings and the regulation thereof.

Professor Henriques stressed several aspects of the Madoff reign of financial terror in her presentation including:

His main attribute was his ability to earn the trust of the participants in the scheme. He accomplished this by returning regular, but not exceptional, returns to his clients in a time of market uncertainty. He then relied on their praise of his abilities to recruit others to the scheme to keep it going. He also allowed his contacts in the industry and in his community, charities, and clubs to refer clients. His scheme grew exponentially when hedge funds and foreign investors joined the throng.

As a result, Madoff did not have to ask his victims to join his ponzi scheme – they had to ask him to receive rewards from the wizard.

Madoff operated a separate, segregated, exceptionally loyal and talented, essentially unregulated, group of employees as an adjunct to his very successful market-making firm. This operation carried out the computer legerdemain and forgery necessary to perpetrate this huge fraud.  These talented folks concocted the necessary paperwork to document non-existent assets and earnings to satisfy inquiring clients and regulators. It helped to have a small audit firm which didn’t really audit anything before certifying Madoff’s statements.

Madoff benefitted from his prestige in the industry and from the weakness of the SEC staff resulting from its failure to pay enough to hire and retain the necessary experienced personnel to carry out its functions. The Commission’s lack of regulatory zeal didn’t hurt either.

Madoff was very, very lucky, but also had the guts and belief in himself and the desire NOT to fail, necessary to take heroic steps to persevere and protect the operation when things looked bad.

Madoff was not caught. His ponzi scheme ended only when HE got tired of running such an enormous fraudulent enterprise.

The unwinding of Madoff’s scheme presents a fascinating study of the legal interaction of the application of SIPC (Securities Investor Protective Corporation) law and the bankruptcy law, with its claw back provisions, to a ponzi scheme which made no investments in, or held, any securities. It appears that the Madoff “investors” will get back about 60 cents on the dollar for their net contributions, but none of their “earnings”. Those who withdrew may well have to pay back amounts withdrawn in excess of their net contributions. This liability is still being litigated, but the estate of the largest withdrawer from the Madoff fund agreed to pay $7.2 Billion to settle the claims against it.

Where does this leave us?
Professor Henriques understands that investing is impossible without trust. She points out that some investors did refuse to put their money with Madoff when it became clear he did not have a separate clearing firm or meet other prudent standards. I’m quite sure Ms. Henriques wouldn’t normally quote Ronald Reagan, but his “trust but verify” dictum might well summarize her view of an adequate anti – Wizard plan.

Our speaker is convinced there is another Wizard out there looking to fleece us. She believes that the present regulatory system based on paperwork disclosure will never be adequate to prevent this.  Our inherent need for trust and certainty will overcome any such system in a world of increasingly complicated investment “opportunities” offered by the Wizards of Wall Street. She believes it must be up to each of us to raise the wizard’s curtain before we get entranced. The lessons to be learned from her presentation and excellent book will help us look out for the next wizard.

Ms Henriques kindly and patiently answered eight questions from Old Guardians. These ranged from the appointment of Mary Jo White to the SEC (good); to how clean was Madoff’s trading operation (very); to would Dodd Frank help? (Maybe); to prisoner mind set (better if you didn’t rat out); to why allow settlements rather than prosecutions (costs, difficulties, lack of personnel); before we reached the 11:30 witching hour.