The Ides of March: Politics in 2012--A Time for Cynicism? Optimism? The Ridiculous? 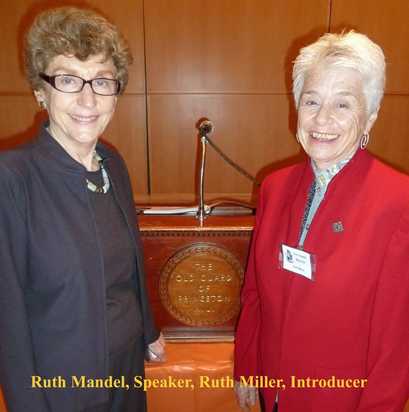 Minutes of the 24th Meeting of the 70th Year
The meeting was called to order at 10:15 AM by President Bob Varrin. Don Edwards led the invocation. There were no visitors. Al Kaemmerlen read the minutes of the March 7 meeting which were written by Nick VanDyck. The attendance was 101.

Ruth Miller introduced the speaker, Ruth Mandel, whose presentation was titled “Politics in 2012 – A Time for Cynicism? Optimism? The Ridiculous?” Ruth Mandel is the director of the Eagleton Institute of Politics at Rutgers University where she is the Board of Governors Professor of Politics.  She has written extensively about the roles of women in politics. In 1993, Mandel was appointed by President Clinton as co-chair of the Board of the US Holocaust Memorial Museum on which she served for 15 years. Her BA is from Brooklyn College followed by MA and PHD in English/American Literature from the University of Connecticut.

After acknowledging many friends and Rutgers colleagues in the audience, Ruth Mandel, in honor of the date, told us about the George Clooney movie “The Ides of March.” In this movie, an idealistic young member of Clooney’s presidential campaign learns the hard way that in politics, idealism is often sacrificed to pragmatism. As a reporter says, the candidate is a nice guy but sooner or later he will let you down. As predicted, the candidate does let down the idealistic staffer whose idealism is reduced to cynicism. The candidate is found guilty of a moral lapse often suffered by men, but not by women, yet. When there are enough women politicians, …….?

Ms Mandel is a self described optimist and assumes that most politicians are focused on doing the right thing. Success in working for the greater good for the largest number of people requires compromise. When your ideals as a voter are compromised, you tend to think your representative has caved. But compromise is not caving, it a necessary component of achieving progress.  When Tea Party representatives in congress are ideologically consistent, eschewing any compromise, you have a situation in which Speaker Boehner loses control of his caucus.

In the current state of politics, there are reasons for deep dismay, or at least some cynicism.  Six “triggers” that cause this cynicism are as follows:In spite of all these triggers for cynicism, Mandel is still an optimist.  Why?

First, because more and more women are getting involved and getting elected. As an example, she took her class on a field trip to Washington and there they met two women representatives from Alabama, one Republican, one Democrat, one white and one black. These two women, while differing on many issues, were respectful of each other, were friends and socialized with each other outside of politics. This is a good time for women in politics. They are standing together in opposition to some of the more extreme legislation affecting women’s health. And they are working together to get more women elected.

Second, because, the younger generation is much more active politically than it used to be, a good sign for the health of our democracy. The youth are becoming more engaged in the issues and taking a pragmatic approach to getting things done.

During the question and answer period, we learned that Mandel thinks it is unlikely that congress will repeal the Citizens United decision legislatively, that she favors televising congressional sessions in the interest of transparency and that prospects for a third party are not good, although she acknowledged that the Republican party is so fractured that it may split in two, thus forming three parties.