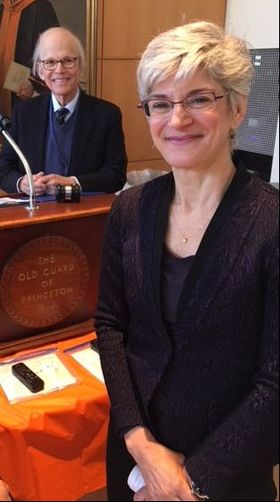 On March 14, 2018, at 10:15 A.M., President Jock McFarlane called the 24th meeting of the 76th year of the Old Guard to order. The invocation was led by Arthur Eschenlauer. Nancy Becker read the minutes from the February 28 meeting. Two guests were presented: Diana Crane introduced Richard Hankinson and Jay Chandler introduced Tom Davidson.

President McFarlane announced the death that morning of Stephen Hawking. He apologized for the weather-related cancellation of the previous meeting and said the speaker would be rescheduled. He asked for a moment of silence in respect for the students who were conducting a walkout protesting gun violence.

He announced that the March 21 meeting would be held at the Andlinger Center. The speaker would be James Hockenberry. [That meeting was canceled because of a nor’easter.]

Landon Jones introduced Sarah L. Kaufman, author of “The Art of Grace,” chief dance critic of The Washington Post, visiting lecturer in the Humanities Council and the Spring 2018 McGraw Professor of Writing at Princeton University.

“Grace is a fruitful subject to write about,” Ms. Kaufman said.

Felled at an early age by open-heart surgery, Ms. Kaufman became an acute observer. Unable to move freely for more than a year, she began to see how others moved and how they interacted with one another. She came to identify those actions and interactions as grace.

Ms. Kaufman used Cary Grant as the quintessential example of grace. She watched several of his films during her recovery. His elegance, his good looks, his quick wit, his refined accent, the quality of his movement and his general demeanor all contributed to that sense of grace. She told a story about his working with a minor actor who was not happy about the delivery of some of his lines. Concerned about costs involved in reshooting the scene for a minor character, the director was ready to move on. But Grant intentionally messed up his own delivery, so the young actor would have a second chance. That was grace.

Grace manifests itself in three ways: physical, spiritual and social.

There is the physical grace of a Baryshnikov or Roger Federer: After Kaufman’s recovery from the open-heart surgery, and to restore her own strength, she studied ballet. She learned how dancers responded to one another, how totally in tune with each other they were. “Dancers feel the emotions of fellow dancers,” she said. “There is a fine-tuned radar, a sense of empathy, which is the core of grace. They soften themselves up to receive signals from others.”

There is the spiritual grace, the sense of a loving presence that helps you get through things and accepts you no matter what: She related the humorous story of a friend whose husband left her for a tango instructor. Enraged, she developed a series of 17 perfect insults, which she was determined to deliver when the right moment presented itself. But when she saw him at an outdoor public event, she greeted him coolly, retreated to a nearby Porta Potti, and describing the moment to Ms. Kaufman, said: “There I seriously felt the presence of God. I couldn’t pull the trigger.”

And there is the social grace of a friend who always has a listening ear for you: Empathy distinguishes humans from other animals. We have the capacity for deep connection with each other. Grace is leaning into the close connection.

“Grace,” she said, “is a worldview that allows us to nurture ourselves and those around us.” Citing ancient Egyptian texts and Renaissance writing, she suggested that the idea of perfecting human behavior so that we can live in harmony with one another was nothing new.

But she feared that basic agreements about behavior have been put into question in our current divided culture. Grace has gone missing. There is a sense today that some people are trying to take control of the narrative, to change things we had agreed upon.

“In my book,” she said, “I want to bring back the old narrative, the way of treating others that has sustained us for thousands of years, the narrative of grace.”

During a Q&A, in responding to a question about grace in the digital age, she said: “We fill our empty hours with our heads down. We dump emotions without looking at others. The comments are toxic and bullying abounds. Parents must engage with their young children early to instill in them a sense of grace.”