The Evolution of Animal Body Plans 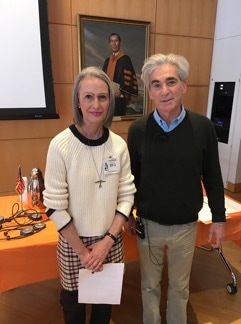 BFG Graham and Michael S. Levine
Minutes of the 24th Meeting of the 75th Year
Jock McFarlane called the meeting to order at 10:15 a.m. in the Convocation Room of the Friend Center. The attendance, 59, was somewhat less than usual, because of the previous day’s snowstorm and the still icy driveways and walkways.

Julie Denny led the invocation, and Seth Malin read the minutes of the previous meeting.

BFG Graham introduced the speaker, Michael S. Levine, director of the Lewis-Sigler Institute for Integrative genomics at Princeton University and the Anthony Ervin Professor of Molecular Biology. Dr. Levine earned his bachelor’s degree from the University of California, Berkeley, in1976, and his Ph.D. in molecular biochemistry from Yale in 1981. In a postdoctoral year in Basel, Switzerland, he was the co-discoverer of the homeobox, which is a family of genes that directs the formation of body structures during embryonic development. Before coming to Princeton, Dr. Levine was professor of genetics at Berkeley. He is widely published, and he has won many awards, including the E. G. Conklin Medal of the Society for Developmental Biology.

He began by discussing the intersection of evolutionary biology and developmental biology. [He could of course assume that his audience understood that genes are the entities that control structure and regulate function.] The genes that control the formation of specific structures or body parts, including segment identity and the anterior-posterior axis in a developing animal are called homeotic genes. Mutations can occur and sometimes do occur in those genes. Those modifications lead to the formation of different structures.  Certain mutations can even cause the right structures to form in the wrong place

As an example, a Drosophila fruit fly belongs to the family of Diptera, which means that it has two wings. Just behind the wings are paired rudimentary or vestigial structures called halters. But a mutation in the Ubx gene can transform the little halters into a full-size second pair of wings.

Another example Dr. Levine showed was an insect with a pair of antennae in the front of its head. There is an abnormal mutated gene that can bring about a change in the developing antennae, so that they become instead a second pair of legs, hence the name Antennapedia.

The various homeotic genes contain a common DNA sequence called the homeobox.  Similar assignments of embryonic development apply in a wide range of creatures, from an insect like a fruit fly to a mammal like a mouse or a human. In the early Drosophila embryo, for example, specific segments can be identified that lead to the development of various organs like the labrum at the head end, a section that controls wing development, and down to abdominal segments at the tail end of the body.

In the second part of his lecture, Dr. Levine considered the evolutionary origin of the vertebrate head. As examples, he showed a slide portraying the heads of a wide variety of vertebrate animals, including an elk, a parrot, a chimpanzee and an iguana. Another slide showed how the embryonic origins of the vertebrate “new head” could be subdivided into a “neural crest,” which develops into the brain and bones of the skull and head; cranial placodes, which develop into sensory organs lie the eyes and cranial nerves; and the cardiopharyngeal mesoderm, which develops into the muscles of the head and neck as well as the heart.

An organism often chosen for study is the sea squirt, or Ciona, which Dr. Levine said is our closest living nonvertebrate relative.  It belongs to the phylum Chordata, which also includes mammals, birds and fish. Sea squirts are marine animals usually found in shallow sea water, often attached to piers or rocks. They’ve become important objects for biological and genetic research. Sea squirts have two siphons: an inhalant siphon, which serves as a mouth; and an exhalant siphon, which expels water and waste. In addition to the siphons, Ciona contains a one-chambered vertebrate-style heart that makes rhythmic contractions, which propel water and its content along the body of the animal. The heart and siphon muscles arise from common progenitor cells.

Dr. Levine noted that the connection between heart and feeding muscles (such as the siphons) has been deeply conserved in evolution, because similar structures have been found in fossils from the early Cambrian Period, more than 500 million years ago.

In conclusion, it appears that the embryos of all animals contain structures capable of developing into adult animals’ specialized structures -- arms and legs and wings as well as hearts and stomachs and other internal organs.  The development of those structures is under genetic control, and mutations in the controlling genes can lead to structural abnormalities in the individuals concerned.

At the conclusion of Dr. Levine’s lecture, there was a lively question and answer period.  He gave high praise to the genius of Charles Darwin and his theory of evolution based on natural selection. In Dr. Levine’s view, natural selection of the products of random mutation can give rise to new characteristics in a relatively short time—that is, in just a few generations, with the resulting development, even among humans, of racial or ethnic groups with individual new characteristics.

Dr. Levine also attributed some of the success of Darwin to the fact that, like Thomas Jefferson, he was a skillful writer. In both cases, that fact facilitated the acceptance of their revolutionary ideas.