History, Tragedy and Comedy:
​The Brooklyn Dodgers at Ebbets Field 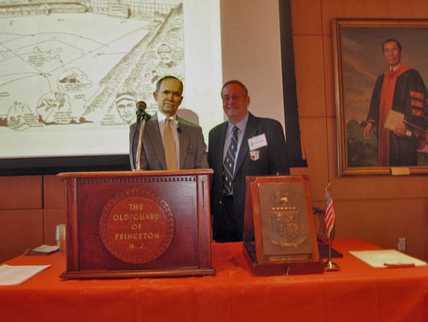 The title of our talk was “History, Tragedy, and Comedy: The Brooklyn Dodgers at Ebbets Field.” Owen Leach introduced the speaker, John Zinn, an independent historian with special interest in the history of baseball as well as the Civil War. Mr. Zinn is the chairman of the New Jersey Historical Society as well as the chair of New Jersey’s Committee on the Sesquicentennial of the Civil War. He is the author of three books, including two about the Brooklyn Dodgers, as well as many articles.

Mr. Zinn proved to know everything about the Dodgers.  Facing an audience that looked generation appropriate, he stirred our memories with a delightful array of stories, photos, and anecdotes.

Guided by William Shakespeare, he divided his tales into history, tragedy, and comedy.

In their early years the Dodgers were led by Charles Ebbets, who was with the team for more than 40 years, from 1883 to 1925. Early games were played in parks with temporary fences. The sole source of revenue came from ticket sales. Games were played in the late afternoon, starting at 3 or 3:30. They lasted only an hour and a half to two hours, and spectators got home in time for dinner.

Ballparks were made of wood, which limited their capacity and also brought major risk of fire. Many burned down. Before Ebbets Field was built the Dodgers played in Washington Park, a wooden park. People could watch games from the fire escapes of their apartments, free of charge. They also could charge other people to come and watch. This frustrated Mr. Ebbets.

The era of steel ballparks began in 1909 with Forbes Field in Pittsburgh and Scheib Park in Philadelphia.

Ebbets Field was started in 1912 and took 15 months to build. The site was so irregular that the land at one end had to be built up 18 feet and at the other end taken down 18 feet to get a level surface. When the field was built it was considered state of the art.

The outfield fences all contained advertisements. Most famous of these was the sign by Abe Stark, a clothing manufacturer. If you hit the sign with a batted ball you got a free suit. At first there were too many free suits, and the sign was replaced by a smaller one.

Ebbets Field had its share of comedy. Casey Stengel tips his hat to the fans, and a bird flies out. Babe Herman runs in to catch a fly ball, his cap falls off, he reaches to catch the cap, and the ball hits him on the head. In one game three Dodgers including Herman end up on third base at the same time. Only one is allowed, two are called out.

Ebbets Field had some iconic fans. Most famous was Hilda Chester, a woman with a voice said to sound like the buzzer going off at Madison Square Garden. In a photo Hilda is holding a sleigh bell, which had been given to her by the Dodger players in hopes that she would use that in place of what she had used before, which was a frying pan which she hammered with a ladle.

A feature at Dodger games was the Sym-Phony band, emphasis on phony, which would march around the field playing loud and off key, trying to distract the opposition. Hard to believe, but the local musicians’ union objected to their being able to play.

The team also sponsored a “music appreciation night”, with free admission to anyone who brought and played an instrument. The New York Times called it music depreciation night.

There was also tragedy. In the 1941 World Series against the Yankees, catcher Mickey Owen drops a third strike which would have won the game for the Dodgers, and they go on to lose the game and the Series.
In 1950 the Phillies have a nine game lead over the Dodgers in September. But the lead shrinks to one, and on the last day of the season the teams play each other. The game is tied in the 9th, the Dodgers have two men on base with nobody out. Snider singles, but the runner on second is thrown out at home. The Dodgers don’t score, the Phillies win in the 10th, and the Dodgers lose the pennant.

Perhaps the Dodgers finest hour came when Branch Rickey wanted to break baseball’s color barrier. He had to be careful and select the right player to do it. He interviewed his candidate, Jackie Robinson, and told him he had to be able to handle all the abuse and not fight back. Robinson said “Do you want somebody who’s afraid to fight back?” Rickey said “No, I want someone who is brave enough not to fight back.”

The greatest tragedy came in 1959, when owner Walter O’Malley moved the team to Los Angeles. O’Malley had no farewell ceremonies; he just wanted to get out of town. Brooklyn never forgave him. There was a joke that if you were in a room with Hitler, Stalin, and O’Malley, and you had a gun with only two bullets, who would you shoot? The answer was that you would shoot O’Malley twice.

In the question period one Old Guard member asked “What do you think about baseball today?” Mr. Zinn said that he doesn’t enjoy the games as much. He can’t stand the designated hitter, and games are far too long.

Another asked “What about 1951?” It turned out that the speaker had omitted this tragedy from his talk on the grounds that this one did not occur at Ebbets Field. Bobby Thomson hits a two out 9th inning home run that costs the Dodgers the pennant.