Hilary Parker
Assistant Vice President in the Office of the President 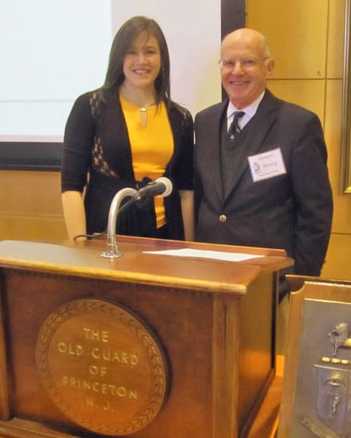 Introduction of Speaker:
Henry Von Kohorn introduced the speaker, Hilary Parker, assistant vice president in the Office of the President, and chair of the Administrative Strategic Planning Team at Princeton University, who has served in various capacities at senior administrative levels of the university since 2001. Her talk was entitled: “Planning for Princeton University’s Future: The New Princeton Strategic Framework.”

Ms. Parker explained that this university initiative differs from many institutional strategic plans that attempt detailed, comprehensive “wish lists” of specifics to be achieved over a stipulated period of time. Instead, she said, Princeton’s is a process—conducted within a flexible, revisable framework—to guide choices by the university’s trustees, administration and faculty members over the coming years.

The framework reflects two years of discussions within the board of trustees, and within campus level task forces, beginning in January 2014. Input from the general university community was also invited -- and continues to be solicited -- through the university website.

The general purpose is to define how Princeton University can continue to provide the finest undergraduate education in the nation while also maintaining its place among the world’s top research universities, particularly in light of continual social, economic and technological changes that influence expectations in the general society about the benefits of higher education.

In the face of increasing pressure to focus on areas of learning and research that can demonstrate economic and technological payoffs, the trustees have already decided that the university will continue to stress liberal arts education while at the same time it strives to take the lead in certain sectors of the sciences and engineering, and encourage entrepreneurial initiatives by faculty members and students.

It will continue to stress its emphasis upon service to the nation and all nations, including direct civic and social engagement and service by students as part of their Princeton education.

In order to expand opportunities for a Princeton education to an ever-growing body of applicants, the trustees have agreed to increase the undergraduate student body by 500 over a period of four years in increments of 125 per year, starting in about two years.

To help further diversify the student body, Princeton will reverse its current ban on transfers. This will enable the university to open up admissions for veterans whose education and training during military service formerly excluded them from the opportunity to come to Princeton. In addition, it will enable the university to attract especially promising students who cannot get the broader and deeper education and research experience they seek at their present institutions.

The trustees have agreed that the graduate school should expand incrementally as the university adds new faculty members, particularly in fields where graduate students are needed as collaborators in research. The university will also increase graduate student stipends in order to attract students for whom there is stiff competition from other institutions.

Special attention will focus on investments in computer science, statistics and machine learning, environmental studies and world affairs and cultures.

Princeton will continue to explore carefully how teaching is influenced by, and can take advantage of, new technologies. A number of faculty members are conducting “mass on-line courses” that reach thousands of students worldwide. But it is not clear yet how effective those new forms of pedagogy are, so the experiment will proceed. But the trustees do not believe that this will displace or substitute for Princeton’s residential model of undergraduate and graduate education or face-to-face mentored education for which there is ever-increasing demand.

The speaker stressed that numerous faculty task forces are still at work defining where they think the university should go from here within their fields, and that their proposals and recommendations will be judged within the framework of general principals already established by the process.

Finally, she wanted to make certain that everyone understands that the future physical development of the university is shaped by an entirely separate “campus planning process,” now in its early stages, which will continue into 2017.