From Cooperation to “Collusion”:
Russian-American Relations in the Era of
​Putin, Bush, Obama, and Trump 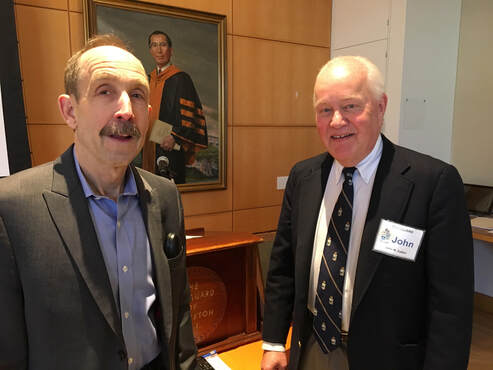 Minutes of the 23rd Meeting of the 77th Year

Julia Coale presided over the meeting of March 20, 2019. Joan Fleming led the invocation, and Ruth Scott read the minutes of the preceding week. Three guests were introduced: John V. Fleming, by his wife, Joan Fleming; Lois Safer, by her husband Jan Safer; and Trudy Glucksberg, by Allen Kassof. One hundred thirteen attended the meeting.

John Cotton introduced the speaker, Professor David Foglesong of the Department of History, Rutgers University. A specialist in Russian-American relations, he is the author of two books, The American Mission and the “Evil Empire": The Crusade for a "Free Russia" Since 1881 (Cambridge University Press, 2007), and America’s Secret War against Bolshevism: U. S. Intervention in the Russian Civil War, 1917-1920 (University of North Carolina Press, 1995).

Professor Foglesong presented a revisionist view of the reasons for the deteriorating relations between the U.S. and Russia, from the implosion of the Soviet Union in 1989 to the present. He argued that there were and remain numerous opportunities for collaboration and dialogue between Russia and the U.S. that are perilous to ignore. He shares this view with Professor Stephen F. Cohen, professor emeritus of New York University and Princeton University. Foglesong told his audience that his remarks to the Old Guard were in effect a rehearsal for meetings he would attend in Moscow the following week.

Foglesong began by describing the Putin-Bush partnership in 2001 and 2002 as genuine and substantial. After the 9/11 attacks, he noted, Russian President Vladimir Putin offered help to President George W. Bush. He also helped the U.S. effort in Afghanistan with Russian intelligence, weapons, and permission to fly U.S. transport planes over Russian territory. Putin’s view that this was a significant chance for cooperation continued through the U.S. attack on Osama bin Laden’s stronghold in Pakistan. In May 2002, Putin signed the arms control agreement that President Donald Trump has recently abrogated and was anticipating an economic agreement as well.

Foglesong said that there had been Russian meddling in the 2016 election. But he denied alleged “collusion” between Putin and Trump, pointing to a number of Trump’s actions opposed to Russian interests: delivering weapons to Ukraine, airstrikes on Russia’s ally Syria, expulsion of 60 Russian diplomats in the wake of the Skrypal poisoning, repudiation of the nuclear agreement with Iran, withdrawal from the INF treaty (Intermediate-Range Nuclear Forces Treaty), and the drive to remove Nicolás Maduro, president of Venezuela, in 2019.

Foglesong next explored and refuted several explanations for the recent precipitous decline in U.S.-Russia relations. It has gone so far, he said, that the western media, both right wing and leftist, now routinely vilify and demonize Putin, comparing him to Stalin. Foglesong cited a 2017 TV documentary, narrated by Morgan Freeman, that advanced the thesis that Putin was so enraged by the collapse of communism in 1991 that he has plotted revenge ever since. In actual fact, said Foglesong, in 1991 Putin resigned from the KGB, opposing the plotters against Mikhail Gorbachev. He allied himself with the reformers and became Anatoly Sobchak’s liaison with foreign businessmen, who found him disciplined and honest. Michael McFaul’s recent memoir asserts that, while Putin is in power, no strategic partnership is possible, because historically we have only allied ourselves with democracies. This is inaccurate, said Foglesong; in the 19th century, from the Civil War down to the early 20th century, the U.S. and imperial Russia were tacit allies. Russia sent its fleet to support the Union during our Civil War, and went to war against the Muslim Ottoman Turks, a crusade the U.S. lauded. Foglesong next cited Steven Kotkin’s pessimism about the U.S.-Russia relationship, based on what Kotkin sees as a fundamental divergence in values. This, said Foglesong, likewise ignores the earlier historical era of goodwill. Ironically, Foglesong said, the early 20th century campaign against Russia was led by George Kennan, Sr. His vilification of the tsar has parallels to the present demonization of Putin.

Others claim that the current animosity stems from Putin casting the U.S. as a foreign enemy to bolster his authority against domestic opponents. Foglesong suggested that we should reverse the onus of responsibility, looking at U.S. actions that ignored Russian interests and promoted a deterioration in relations. They include withdrawal from the ABM treaty (Anti-Ballistic Missile Treaty), the invasion of Iraq, and the expansion of NATO. When Bush’s support for Georgia joining NATO emboldened Mikheil Saakashvili to attack the breakaway regions of South Ossetia and Abkhazia, the western press treated the Russian response as Russian aggression. Our installation of missile defense systems in Eastern Europe and the 2011 bombing of Libya and overthrow of Muammar Gaddafi were additional affronts, followed by U.S. support for the rebels in Syria and for anti-Russian candidates in Ukraine. Despite these actions, possibilities for cooperation have continued. Putin pressed Bashar al-Assad to give up 90-98% of his chemical weapons in 2013, and the Russians helped restrain Iran’s nuclear program in 2015.

Foglesong concluded by citing two instances that prove that the two countries can cooperate when their interests coincide: first, Russian-U.S. cooperation in WW II, and, second, Ronald Reagan’s dramatic shift between 1983, when he called Russia the “evil empire,” and 1988, when he embraced Gorbachev for ending the Cold War. Both shifts resulted from a rapid switch in public perceptions engineered by the U.S. government. The prospects of future cooperation, Foglesong said, depend on four factors: curbing costly nuclear modernization, avoiding dangerous miscalculations, countering terrorism and nuclear proliferation, and promoting mutually beneficial economic development.

In response to questions, Foglesong expressed dismay at the loss in recent years of a lively media open to free exchange of ideas. He doubts that relations will improve under Trump. Last, he insisted that rapprochement requires our giving up demonization and acknowledging fault on both sides.