Political Punditry in the Age of Data:
Lessons from the 2012 Presidential Campaign 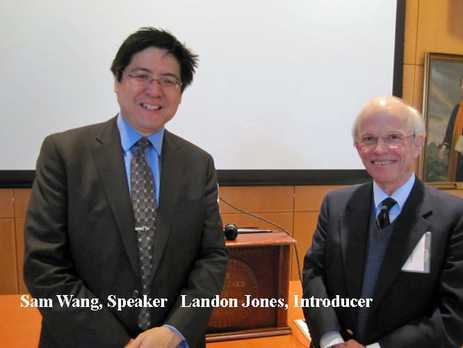 Landon Jones introduced the speaker, Sam Wang, whose topic was Political Punditry in the Age of Data: Lessons from the 2012 Presidential Campaign.

In 2004 Professor Wang founded the Princeton Election Consortium, a meta-analysis directed at the question of who would win the Electoral College. Meta-analysis of state polls provides more objectivity and precision than looking at a single poll and gives an accurate current snapshot of the state of play. Starting in 2012, this site also provided a prediction based on the current year’s polls and the amount of variation observed in similar past races.. It has the specific advantage of not relying on poorly-justified assumptions such as economic conditions. It relies only on polls, which are the only direct measure of opinion. The approach taken in both popular and political science models introduces more noise than signal.
​
Over the course of the recent campaign, this site attracted over four million visits. Meta-analysis provides more objectivity and precision than looking at one or a few polls, and in the case of election prediction gives a highly accurate current snapshot.  Calculations are based on recent available state polls, which are used to estimate the probability of  Democratic/Republican win, state by state. These are then used to calculate the probability distribution of electoral votes corresponding to all 2.3 quadrillion possible combinations.
​
Taking a quote from Robert Kennedy “Some men see things as they are and say why? I dream things that never were and say why not?” For Prof. Wang his theme is to see things are they are which he emphasized by showing quotes from the pundits Peggy Noonan, John Dickerson, Joe Scarborough and as he said our own George Will all of whom predicted a Romney win very close to election night.  He asked how these highly paid national figures could be so wrong and his answer is because they are not looking at the data and they are not paid to be right but to gain followers for their media.
He then proceeded to compare the analysis of a campaign to being like a weather forecaster for a hurricane.  Like hurricanes, political campaigns have their strikes and swales.

State polls are much more accurate and do a good job of predicting election outcomes. They are incredibly more reliable than national polls because they cover a smaller area and can focus in on more details about the electorate. Just as everyone wants to know where the storm will hit, so too do they want to know where the political breezes are blowing.

Now that the election is over for the next four years Professor Wang is looking at other creatures to slay such as cicadas and butterflies which he sees as correcting the problem of gerrymandering. As an example of these strange looking creature-like districts, he showed a slide of gerrymandered congressional districts in Florida, Illinois, Texas, Pennsylvania, Ohio, Michigan and North Carolina. In describing the North Carolina district he said a candidate could drive down Route 95 open the doors on both sides of the car and meet all his constituents. After the 2010 census, congressional districts were drawn up by state legislators and governors who have a decided interest in political distribution to serve their self interests. These politicians  have created districts that will be in effect for ten years.   Even though a congressional district may go to one political party, they may not be commensurately represented in the House of Representatives. Prof Wang thinks gerrymandering is a much more pressing problem than voter fraud and other issues about which people are concerned regarding elections. He thinks that perhaps getting a question of gerrymandering before the Supreme Court might be the answer.

By using his blog, Prof. Wang assured us that instead of staying up until midnight to find out who would be our next president, we could go to bed at 9:30 p.m. on election night because by then he would have informed us who would win.

Prof. Wang has a delightful sense of humor which added to what otherwise might have been a dry, statistical report.  Following a spirited and lively question and answer session, the program adjourned at 11:30 a.m.