"Keep the Damned Women Out": The Struggle for Coeducation 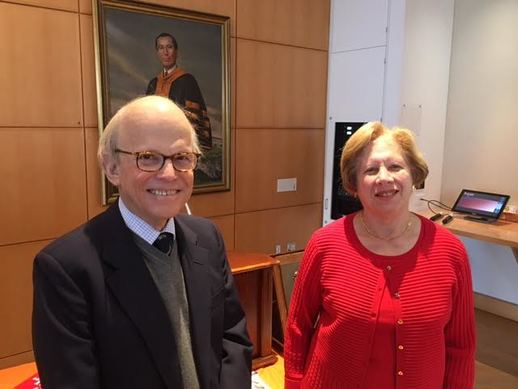 Minutes of the 25th Meeting of the 75th Year

On March 22, 2017, 88 Old Guard members and guests attended in the Friend Center.  The invocation was led by Julie Denny and President Jock McFarlane presided.

Robert Altman, on behalf of the Membership Committee, announced that a slate of new members would be voted on at next week’s meeting.

Landon Jones introduced the speaker.  In the late 1960s and early 1970s several colleges introduced coeducation. Why did those decisions occur, and why did so many of them happen at the same time? Nancy Weiss Malkiel received her B.A. from Smith College in 1965 and her Ph.D. in history from Harvard. She was a faculty member in the history department at Princeton and then became Princeton’s Dean of the College. The title of her most recent book and the title of her talk today is “Keep the Damned Women Out,” a quote from an alumnus letter.

For the male Ivies, it was a case of strategic self-interest. Applications were declining. The “best boys” no longer wanted to go to all-male colleges. The decisions were not made because of a mission to educate women, but rather how would the presence of women help improve the educational experience of men? Every decision maker (except for Polly Bunting of Radcliffe) was male.

Kingman Brewster, the president of Yale, began talking to Vassar College about Vassar possibly moving to New Haven. A feasibility study was begun. At the same time, Robert Goheen, the president of Princeton, went up to Sarah Lawrence College to see if it would move to Princeton. Mr. Goheen discussed the issue of potential coeducation with the trustees and Gardiner Patterson, then dean of the Woodrow Wilson School, was charged with leading a feasibility study. In 1967, Vassar said no to Yale, and in 1968, at Princeton, the Patterson Report was presented.

Mr. Brewster then announced that women would be admitted to Yale in the fall of 1969, although no preparation had been made for their arrival on campus.  By contrast, the trustee committee at Princeton engaged in a thorough process, reviewing the Patterson Report.  In late April 1969, the trustees voted yes and decided to admit women that fall.

Within four years, women students were excelling. But alumni at both Princeton and Yale were strongly opposed.  One Yale alumnus said that women were fine for dances but were a drag if you had to spend a lot of time with them. Princeton alumni were no more accepting. Why this death wish? What is this nonsense about admitting women? A good old-fashioned whorehouse would be a better choice.

By the late 1960s, Vassar was having problems with admissions. But alumnae were fiercely resistant to merging with Yale and faculty members were concerned that they would be treated like second-class citizens at Yale. In 1968, therefore, Vassar voted to admit men in spite of concern about how to attract men of sufficient quality and in sufficient numbers.

Wellesley and Smith could not avoid a discussion of the coeducation issue.  Wellesley appointed a commission which reported in 1971 and which recommended coeducation.  But the president was strongly opposed and the trustees rejected the commission’s recommendation.

Smith was genuinely torn. The president thought that they might have to go coed given the then current climate.  A faculty member was appointed to write a report à la the Patterson Report and the recommendation was to admit men.  President Mendenhall worried about being able to continue to attract sufficiently able women. Could Smith afford to go coed.? Two surveys of students in 1967 and 1969 were inconclusive. The first favored coeducation and the second said no. Influential were two alumnae, Gloria Steinem and Betty Friedan. Steinem gave the commencement address in 1971 and gave a hard-hitting talk declaring that remaining a women’s college was a feminist act. In April 1971, a commission recommended that Smith remain single sex, and in October 1971, the faculty recommended the same.

A question and answer session followed. Questions included: What about Columbia and Barnard? What about the Princeton Graduate College? What about Oxford and Cambridge? What about Mount Holyoke? Other questions referred to Brown, Penn, Cornell.