History & Development of
​Community Foundations in the United States 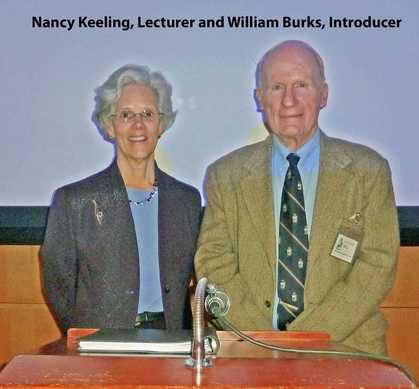 Minutes of the 23rd Meeting of the 69th Year
President Bob Varrin called the meeting to order at 10:15am in the Friends Center, this being the 23rd meeting of the 19th year. He called on Don Edwards who led us in singing the prayer of invocation. Owen Leach read the minutes of the last meeting’s talk by Miquel Angel Centano on War and Civilization—“Is War What Makes Us Human?”  The minutes were warmly received by the approximately 75 members present.  No guests were present on this cold, snowy day.

Bill Burks, yours truly, introduced the speaker, Nancy Kieling who spoke about “The Evolution of a Brilliant Idea: The First 97 Years of Community Foundations.” Mrs. Kieling brings an experiential background of 17 years directing a fast-growing community foundation from its infancy with $300M of assets and annual grants of $12M to its present state of $70 million with grants of $3.5 million.

Nancy first described what a community foundation is: a local, tax exempt, publicly-supported organization serving thousands of people who share an interest in their communities. They perform this service by creating a number of charitable funds of varying kinds that are easy to set up, manage and work at all asset levels. Community foundations identify current and emerging issues, do things that make communities better and their permanency helps their hometowns prepare for the future. They are asset builders, grantmakers and conveners and manage funds in which donors retain varying degrees of engagement. Community foundations are overseen by a board of civic leaders and run by staff with broad expertise. Nancy likes to say community foundations help generous people give away money and have fun doing it. She then described the major differences between community foundations, private foundations and commercial donor advised funds, comparing them with respect to expenses, flexibility, anonymity and donor services.

Tracing the history of community foundations back to their origin in Cleveland in 1914, Nancy went through the evolution of the field and why they sprung up in certain big cities. There are now over 900 community foundations in the US alone with over $40 billion in assets. The field continues to grow rapidly as the advantages of this community philanthropic resource become better understood and appreciated.

Nancy responded informatively to a number of questions from the assembled group—most of them directed toward the specific philosophies and management principles of the Princeton Area Community Foundation.