Surprise Encounters with Artists and Scientists,
​Whales and Other Things 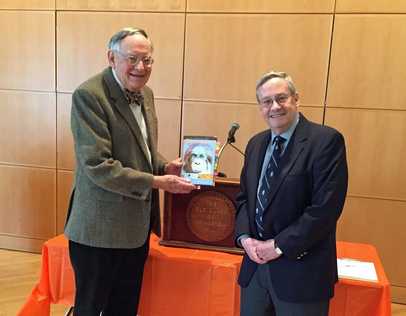 Scott McVay, Speaker, and Owen Leach, Introducer
Minutes of the 25th Meeting of the 74th Year
Welcome to this morning’s talk by Scott McVay. The book of the above title was first suggested by one of Scott’s Princeton classmates on a trip to Morocco, at Rick’s Bar in Casablanca. Scott was recounting stories, as only he can, and his friend said, “You need to write these down,” which over the next three years he proceeded to do.

Scott has had a fascinating career that has included leadership of both the Robert Sterling Clark and Geraldine Rockefeller Dodge Foundations, as president of the Chautauqua Institute, as chief executive of the World Wildlife Fund and included service for many years as recording secretary at Princeton University, working closely with then-president Robert F. Goheen. He also had a long association with the Communication Research Institute in Florida, which involved the study of language among dolphins, porpoises and whales when Scott collaborated with a noted mathematician to discover the secrets of whale songs. Today’s talk, the third he has given at Old Guard meetings over the past 42 years, draws on 152 “encounters” with rich, famous, brilliant and lucky people – and creatures – who have touched his life and doubtless been touched by him.

His book includes 152 chapters – call them “vignettes” – and his intention this morning is to highlight for all of us a dozen or so of his favorites. Unfortunately, for us at least, he hasn’t referred specifically to any of the brief chapters or observed that that those who write their own stories see fewer doctors!  Capturing adequately the stories he recalled was anything but easy to do.

His opening story had to do with his association with the 8th Infantry Division in Texas, where he observed that the troops could smoke or talk, but couldn’t read. The troops, he said, “like to hear their own voices!”

In his second vignette, he talked about President Ronald Reagan and his Presidential Scholars. Reagan acknowledged that he was never a very good student at Eureka College, but gave a great speech once while traveling in China and announced that God was on his side!

The focus in his third vignette was to “Alpha” and “Beta” monkeys at the Kyoto Primate Research Institute in Japan where he concluded that older monkeys certainly learn more slowly than younger monkeys!

His next favorite citation had to do more seriously with the International Whaling Commission during the 1970s and his close association with Interior Secretary Russell Train, Princeton ’41, who was unable in 1975 to halt the Japanese and Soviet whale kills worldwide.

Given his lengthy association with Princeton and president Robert F. Goheen on complex issues like coeducation and the Vietnam War, he was more than amused when President Goheen once said, “A little holy water here and a little holy water there!”

Scott enjoyed a brief association with the Chautauqua Institute, where summer baseball was highlighted, but wondered who could have ever imagined there not being a “Poetry Window” in the chapel!

And there was another reference to Chautauqua, in 2003, when Princetonian Georgia Nugent ’73 was provost at Kenyon and wrote that to become a hero in Greece in the old days you had to be killed by Homer!

In another of his 152 vignettes, he asked whom people looked up to and wondered about Isaac Asimov. But his own response was Marvin Minsky, the father of artificial intelligence.

He devoted a chapter to Thomas Kean, Princeton ’57, who served as New Jersey governor and for a number of years as president of Drew University, but cautioned his friends never to ask “if I’m running for president of the United States.”

In 2000, Scott touched on one of the Alumni Council’s reunion panels when George Bush was challenging Al Gore for president and in colloquial Russian was quoted as saying, “Hey, Big Boy, watch out and back off” and then said publicly, “Good basketball is also a head game!”

In an essay on artists, Scott announced one year that he wanted to observe creation in 2001 at Chautauqua as predicted by Stanley Kunitz. Kunitz responded by saying one can visit any three points having to do with creation -- tomorrow, tomorrow and tomorrow!

At a well-documented tribute in 1985 at the Woods Hole Research Center in Massachusetts, which included the environmentalist George Woodwell, John Steinbeck and others, Woodwell was invited to say a few words and responded, “You want me to speak….No thanks!”

And then Scott concluded his random observations with comments about the abuse of many funeral homes, as observed by Peter Putnam, Princeton ’42, a long-time resident of Tigertown. “It’s unfortunate,” he said,” “that too often a 6’3” body is placed in a 6’ casket with the result that we have to flex the knees or cut off the feet!”

There were several questions afterward by Owen Leach and Dave Fulmer and generous acknowledgement that Scott had had the good fortune to interact with numerous celebrated writers and scientists over the years, and that we should all endeavor to keep our stories as close as possible to the facts. It was clear to all in attendance that Scott had very much enjoyed recounting so many of the tales that he’d included in his book and hoped we’d all enjoy reading the entire book.
​
Faithfully submitted,
Jotham Johnson ‘64