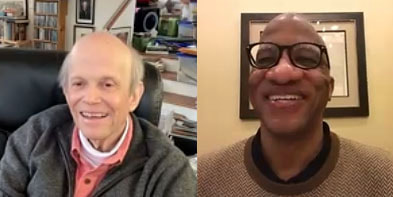 Minutes of the 25th Meeting of the 80th Year

​President Stephen Schreiber called the meeting to order at 10:15 AM on March 23, 2022. Anne Seltzer read the minutes for the previous week’s meeting. Guests (and their hosts) included Sarah Jones (Lanny Jones) and Richard Oluda (Len Berlik), who were welcomed by the president. One hundred fifteen members attended the meeting.

President Schreiber announced that the Executive Committee will meet Friday afternoon at the Nassau Club. He also noted that the Program Committee will meet on Wednesday, March 30 at 2 PM to begin planning the Fall roster, and that Program chair George Bustin has sent out materials to committee members to prepare for the meeting.

The speaker at our March 30 meeting will be Barbara Demick, Journalist and Visiting Lecturer in the Humanities Council, Princeton University, who will speak on “Reporting from Repressive Regimes while Authoritarianism Is on the Rise.”

Professor Haygood began his talk by noting that the movies are the way America speaks to the world; others see us and our values through what is on the screen. This insight motivated Haygood to write his most recent book and the subject of his talk, “Colorization:  One Hundred Years of Black Film in a White World.” Professor Haygood opened his book with an assessment of The Birth of a Nation, released in 1915, which shows Black Americans to be lazy, malevolent criminals obsessed with white women, while members of the violent Ku Klux Klan were portrayed as heroes of white America. In Haygood’s view, this was an epochal moment in American film history. The film was seen by more than 25 million people, was hugely profitable, and created a vicious stereotype of Blacks that endured for generations. Wherever the film was shown, demonstrations and violent riots followed. The film transformed the industry.

Haygood recalled his boyhood love of cinema with its illustrious stars, but he reflected that all these celebrities whom he saw on the screen at the Garden Theater in Columbus, Ohio, had one thing in common --- all were white.  He examined in detail the struggles over many decades of Black filmmakers to finance and produce their work, as Hollywood and the industry remained closed to them, and also the challenges faced by Black actors to obtain significant roles. Leading roles for Blacks were almost unheard of until late in the 20th century, and even then, they were rare. Haygood credits Lilies of the Field (1963) with Sidney Poitier for opening Hollywood to Black leads and Black themes. He also considers that Alex Haley’s TV series Roots and the Broadway play A Raisin in the Sun brought profound change to the visibility of Black actors and Black narratives in American cultural life. He noted the constructive role played by Lanny Jones as editor of People magazine, by running two issues in sequence entitled “Black Out,” investigating the absence of Black filmmakers and actors in cinema.

Professor Haygood also discussed an earlier book, The Butler, examining the life of Eugene Allen, a modest man who worked in the White House under every president from Truman to Reagan, and who loved every first family he served without regard to their politics. Indeed, Haygood said, Allen loved his country more than his country loved him.  Haygood got the satisfaction of seeing this book reviewed on the front page of the Washington Post and then transformed into a movie with a multiracial cast of big stars, including seven Oscar winners. He pointed out that most if not all the great Black actors and entertainers, from Paul Robeson to Harry Belafonte and Sammy Davis, Jr., to James Earl Jones, Sidney Poitier, and Oprah Winfrey, were active in the civil rights movement and fought for honorable roles fairly representing Black American culture and narratives.