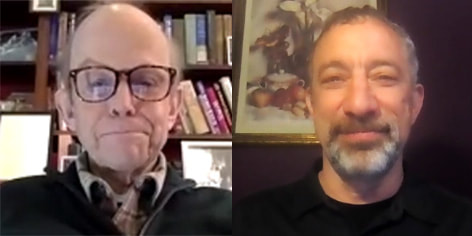 Joe Richmond, the producer and reporter of Radio Diaries, spoke about his ‘Hunker Down’ portraits and presented clips of pairs of individuals conversing about the impact of the Covid 19 pandemic. The series was broadcast on National Public Radio and is available in full on Radio Diaries Portraits.

The project developed out of a need, during the pandemic, to avoid the more extensive production process of Radio Diaries. Diverse pairs of individuals were given recording equipment. Their personal stories could be developed for broadcast in weeks rather than months or years. The stories, he hoped, would provide a deeper understanding of the pandemic, what he referred to as an “emotional sidebar to the news.”

The first clip Richmond played was the longest; a conversation between Joe Newman, 107 years old, and his fiancée, Anita Sampson on her 100th birthday. He had hoped that Joe might have some memories of the Spanish flu of 1918-1919, and could provide a comparison. Joe had few memories of the earlier pandemic, but pointed out that, unlike today, there were few radios and no television. News was mostly obtained by word-of-mouth.

Confined to their apartment, Joe felt that the virus was just another problem. You do what you have to do. There were, nevertheless, some days in which he felt he would almost welcome death. Anita indicated she had become anxious when she had a cold because she wanted to reach her 100th birthday. Joe said that was new to him. She had told him she had no fear of dying. Anita responded by saying that she didn’t want to die; she liked Joe, liked the relationship and didn’t want it to stop. “Do you love me,” she asked?  “I think so,’ Joe responded. He went on to say that we can look forward to the future, years, months, or even a day and hope for another.

The second clip was of Wendy and Robert Jackson. Robert, 71, had a kidney transplant and his immune system was compromised. His wife, Wendy, a pediatric emergency room doctor, risked exposure at work to the corona virus. The couple made the decision to live together, but ‘six feet apart.’ They could not sleep in the same bed and could hardly be in the same room. https://www.radiodiaries.org/love-from-six-feet-apart-revisited/

Both missed the physical intimacy. Wendy thought she could still show her emotional connection through little things, like making Robert’s favorite meal. Robert missed her warm feet in bed on a cold night. After receiving their vaccinations, Richmond suggested they might record their first hug. They said no.

The third clip was a recording of a phone conversation between Moe Monsuri, incarcerated in Sing Sing, and his friend, Robbie Pollock, on the outside. Moe indicated that an older man 40 feet from his cell, had been the first to get sick. It generated fear. Behind bars, the public spaces in bathrooms and showers are shared by hundreds going in and out. You try to avoid people who might be sick. Everybody wants to stay alive. All you can do is stay in your cell and read. Moe asked Robbie to send him a book.

The fourth clip was of a conversation between Paul Montanaro in his pizza shop in the Bronx and his 11-year-old daughter Francesca who stayed in the shop with him since her school closed. Her mom is an Intensive Care Unit nurse at a hospital in Manhattan. Even though she’s with her father she is alone much of the day. Her mother might not arrive to pick her up until 7 or 8 PM. Paul praised Francesca for observing how pizza was made, and learning enough to make one herself. Francesca asked if, at some point he would want her to take over the business. He told her “I can feed people; mommy can save lives. You can do better things than I do.”

Richmond then responded to questions that elicited information on the nature of the series and his own thought about the pandemic. He indicated that it had provided an opportunity to rethink the work they were doing, and to try something else. In creating portraits, a variety of decisions had to be made about what to include. He suggested that, with radio, a sound he termed ‘touch at a distance,’ the pictures listeners create in their minds are more evocative than the images on television. He wasn’t sure how the pandemic would affect lives in the longer-run, but thought it would; and he wondered how his teen-age daughters would be affected. In response to a question, he thought it would be interesting to show the pictures of the individuals after playing their clips to see whether they accorded with the images created by the recording.

With that he moved on to his final clip, a conversation between Patrick Kearns and Paul Kearns-Stanley, owners of a funeral business in New York started in 1900. Experience had shown a funeral to be a ceremony in which they truly got to know those involved; it created a personal bond. With the pandemic, funerals had become short and terse, with a few people sitting apart and wearing masks. At the cemetery, you stand 50 feet away from a hole in ground.  “I want to cry,” said one. “I’m fearful of a next wave,” said the other. Showing their pictures after playing the recording, they appeared younger than imagined.

Richmond closed by suggesting that the stories were compelling because, beyond the impersonal data that describes what has happened, they enter our consciousness like a Trojan horse, beyond our defenses, and allow us to think about larger issues.