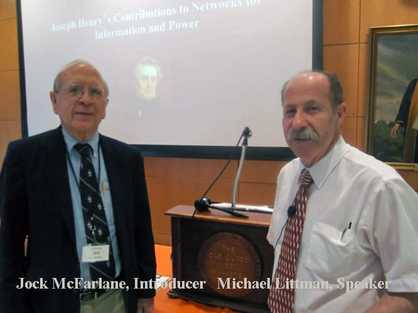 Jock McFarland introduced as speaker Michael Littman, Professor in Princeton University’s Department of Mechanical Engineering and Aerospace. Professor Littman’s undergraduate degree was from Brandeis, and his PhD. from MIT. He has been on the Princeton faculty since 1979. His research comprises a terrestrial planet finder that aids in finding planets near bright stars, lasers, combustion diagnostics, parallel computers, and application of biological principles to the design of robotic systems. He contributes to Princeton’s EPICS program: Engineering Projects in Community Service and also advises the Time Team, a multidisciplinary group of students that replicates and restores historic mechanical, electrical, and experimental devices. He participates in efforts to bring to middle school students the inspiration and motivation to study science and engineering.

Professor Littman’s talk was entitled “Joseph Henry: Pioneering a Century of Innovation in Applications of Electricity.”

In the early 19th century electricity and magnetism were thought to be different forces, but by the 1820’s they considered as linked, and around mid-century the linkage was formalized in Maxwell’s equations. Henry’s work from the 1820’s to the 1870’s constituted a great contribution to the application of electromagnetic theory to telecommunication, electric motors, and electric power generation.

In particular, Morse’s telegraph grew out of Henry’s work. Alexander Graham Bell was encouraged by Henry’s advice when, after Bell said his lack of understanding of electricity was holding his invention back, Henry told him,”Get it.” Faraday’s development of the electric transformer also relates to Henry’s work. And Henry demonstrated the first practical electric motor and an electromagnetic relay while at Princeton. In 1858, when the trans-Atlantic telegraph cable was opened, there was much celebration of Princeton as the birthplace of the telegraph.

Henry’s early work on electromagnetism and the telegraph register were done while he was teaching at his alma mater, the Albany Academy, before his departure in 1832 for Princeton, where he taught for 14 years.

While at Princeton, Henry solved the problem of sending electrical signals over long wires by connecting batteries in series to boost the voltage of the circuit. He also demonstrated that the earth could serve as the return conductor in a circuit, thereby permitting one-wire telegraph circuits. And he first observed the wireless transmission of electromagnet energy.

Henry left Princeton in 1846 to become the first head of the Smithsonian Institution, where he remained for his last 30 years. It was from there that he exerted his influence on Bell and others.

Most of his contributions flowed from his invention of very strong electromagnets, which he made by wrapping soft iron bars with multiple layers of insulated copper wire. These opened the way to the telegraph, the electric motor, electric power generation, and the electric relay, and, less directly, to the telephone and radio.

While Henry knew that his devices might in time grow into those having great economic value, he felt that the benefits of science should not be diverted to any individual. Later, he was envious of the riches earned by those inventors who did patent their work, as evidenced by his comment that he probably had been “too fastidious”. In the case of the electric motor he underestimated its potential, thinking that steam power would always out-do electric.

After Henry’s death Lord Kelvin applauded his decision to continue his research rather than divert his attention to focus primarily on its applications, while at the same time encouraging others to work on the practical applications.

At the Columbian Exhibition in Chicago in 1893 a number of derived physical units of the Systeme Internationale were named, including the Henry for induction, the Farad after Faraday for capacitance, and the Ampere after Andre-Marie Ampere for current.

In the 19th century permanent magnets could be made by substituting steel for soft iron as the magnet’s core, because steel remains magnetized even after current ceases to flow through it surrounding coil.

Insulated wire was not commonly available early in the century, so Henry had to insulate long lengths of wire with cloth or with thread windings before winding the coils of his electro magnets.

Henry demonstrated the wireless transmission of electromagnetic energy with a needle surrounded by a coil of wire connected to the metal roof of his house and grounded in a well. The electromagnet radiation from a lightning strike eight miles away magnetized the needle. This was at Princeton in1842, well before 1888, when Herz demonstrated wireless transmission of radio waves.