Examining the Other:
​A Writer's Responsibility to See Through a Wider Lens 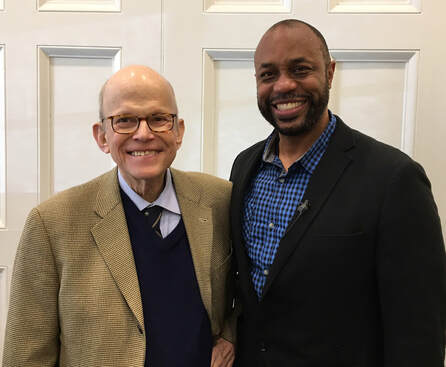 Minutes of the 24th Meeting of the 77th Year

Lanny Jones introduced the speaker. Nick Chiles is an award-winning journalist and three-time New York Times bestselling author. He has written or co-written 14 books and won over a dozen major journalism awards during a career that brought him to the Dallas Morning News, the Star-Ledger of New Jersey and New York Newsday, where he won a Pulitzer Prize as part of a team of reporters. He currently holds positions as a contributing writer for The Hechinger Report, a Columbia University based nonprofit covering national education issues, and as a Spring 2019 Ferris Professor of Journalism here in Princeton.
Mr. Chiles talked on “Examining the Other:  A Writer’s Responsibility to See Through a Wider Lens.”

As an African-American – a term he used – he is more than aware of being an Other. He repeated a story about his infancy in Jersey City. His mother had left him in his carriage and had dashed back into the house to get her grocery list. When she returned, a minute or two later, there were about three or four white kids looking at the carriage and shouting, “Nigger! Nigger! Nigger!”

Upon graduating from Yale in 1986, Mr. Chiles went to work at the Dallas Morning News.  As a New Jersey born, African-American Yalie in Texas, Mr. Chiles was definitely an Other and, with apologies to any Texans in the Old Guard audience, he emphatically stated that he hated Texas. A phone call to a Yale alumnus brought him back to home territory and the Newark Star-Ledger.

In a perfect bit of timing, he next joined New York Newsday. There, he was a member of the staff that won the Pulitzer in 1992 for spot news reporting. When that excitement died down, Mr. Chiles found himself stuck in front of a computer screen and bored.

He contacted a Newsday colleague in Mississippi and asked for work that allowed him to represent those outside the mainstream. In receiving that assignment, he was warned that he would be upset by the appalling destitution of those he was to interview. He was surprised by what he actually found. Rather than talking to people with wasted lives, he learned that there was a strength of character and a hopefulness among the poor that his colleague had not seen. “People in the South,” Mr. Chiles said, “are not defined by what they don’t have.” Poverty did not describe them, and this realization was one of the factors contributing to the course that he is now teaching at Princeton.

When not escaping to Mississippi, Mr. Chiles remained on the staff of Newsday’s New York edition. That paper, he related, was losing money and, in 1995, its Times Mirror shareholders – I quote – “needed bigger vacation homes.”  The paper was closed and the staff given a one day notice on a Friday.

Mr. Chiles returned to the Star-Ledger and there was assigned a series on high school students in the Class of 2000.

There were six students chosen from a Newark high school and six from an affluent Livingston high school. This assignment dramatically brought home to him the stark differences between poor and wealthy populations.

The Newark kids told him and the photographer working with him everything. They felt no compulsion about sharing their troubles, their goals, or their lives. This sharing, Mr. Chiles reported, had its limits when one student asked the photographer if he wanted to go with her when she bought drugs. The photographer immediately called Mr. Chiles and his response was, “Don’t go!”

The only response from the more affluent families was that everyone was happy and that everything was perfect. One of the students in the series was institutionalized and the father emphatically told Mr. Chiles, "if you mention this my lawyer will sue you."

The finding that more affluent people only admit to happiness and keep secret any aspect of their lives that contradicts such an appearance is another aspect that he is now bringing to his class.

Through a colleague at the Hechinger Report, he was put in contact with a black woman who was involved as a youngster in desegregating schools in Sunflower County, Mississippi. Archie Manning (father of Peyton) was a classmate. “He didn’t spit on me,” she told Mr. Chiles, “but he didn’t stop it.” After a successful business career, this woman had returned to her childhood home and was shocked at the conditions – such as, no toilet paper in bathrooms – in the local schools.

Her response was not to rail against school boards or local politicians but rather to enrich student lives by taking them to museums, shows, and sports events. In so doing, she tried to supplement their lives with activities that they would otherwise never have.

“Poor people deserve pleasure too,” she told Mr. Chiles and this was new to him.  Pleasure is not embedded in the concept of welfare. Society today perceives pleasure as not acceptable for the poor.

Mr. Chiles argued that we need a truer depiction of marginalized communities. The media only reports what’s wrong. “There is nothing more harrowing,” he said, “than the first 15 minutes of local news.”

He incorporates all these stories in his class. He wants his students to realize the scope of the responsibilities a journalist has when writing about the Other. They must, he emphasizes through his experiences and class assignments, do away with preconceived notions. They must see through a wider lens.

In response to a question about his students’ concept of the Other, Mr. Chiles said that the class concentrated on feministic issues as there was only one male student. And that gender divide, he noted, is true throughout much of Princeton’s classes – overwhelmingly predominantly female in the humanities and male in the science and technology classes.

When asked how he would interview President Trump as an Other, Mr. Chiles said he would like to explore Trump’s relationship with his mother. She is rarely if ever mentioned in his profiles and it would be interesting to note how she influenced him.  Even then, however, Trump would probably still remain an Other.