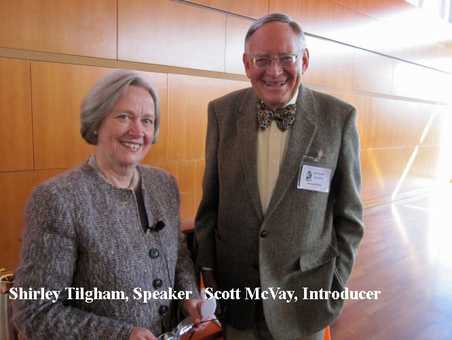 Minutes of the 23rd Meeting of the 71st Year
President Ruth Miller called the 23rd meeting of the Old Guard’s 71st year to order at 10:15am. 127  members were in attendance. Guests and their hosts included: Bob Pickens attending with Brown Elmes; Lanny King with Henry King; Janet Dickerson with Ben Colbert; Bob Harris and Hella McVey with Scott McVey; and Bobbi Purvin with Larry Purvin.
Minutes of the March 20th meeting were read by Helen Hamilton.

Speaker Biography:
Soon to retire, Shirley M. Tilghman was elected Princeton University's 19th president on May 5, 2001, and assumed office on June 15, 2001. An exceptional teacher and a world-renowned scholar and leader in the field of molecular biology, she served on the Princeton faculty for 15 years before being named president.

Tilghman, a native of Canada, received her Honors B.Sc. in chemistry from Queen's University in Kingston, Ontario, in 1968. After two years of secondary school teaching in Sierra Leone, West Africa, she obtained her Ph.D. in biochemistry from Temple University in Philadelphia.

During postdoctoral studies at the National Institutes of Health, she made a number of groundbreaking discoveries while participating in cloning the first mammalian gene, and then continued to make scientific breakthroughs as an independent investigator at the Institute for Cancer Research in Philadelphia and an adjunct associate professor of human genetics and biochemistry and biophysics at the University of Pennsylvania.

Tilghman came to Princeton in 1986 as the Howard A. Prior Professor of the Life Sciences. Two years later, she also joined the Howard Hughes Medical Institute as an investigator. In 1998, she took on additional responsibilities as the founding director of Princeton's multi-disciplinary Lewis-Sigler Institute for Integrative Genomics.

She is renowned not only for her pioneering research, but for her national leadership on behalf of women in science and for promoting efforts to make the early careers of young scientists as meaningful and productive as possible.

From 1993 through 2000, Tilghman chaired Princeton's Council on Science and Technology, which encourages the teaching of science and technology to students outside the sciences, and in 1996 she received Princeton's President's Award for Distinguished Teaching. She initiated the Princeton Postdoctoral Teaching Fellowship, a program across all the science and engineering disciplines that brings postdoctoral students to Princeton each year to gain experience in both research and teaching.

In 2002, Tilghman was one of five winners of the L'Oréal-UNESCO Award for Women in Science. In the following year, she received the Lifetime Achievement Award from the Society for Developmental Biology, and in 2007, she was awarded the Genetics Society of America Medal for outstanding contributions to her field.

Tilghman is a member of the American Philosophical Society, the National Academy of Sciences, the Institute of Medicine and the Royal Society of London. She serves as a trustee of the Carnegie Endowment for International Peace and the King Abdullah University of Science and Technology, and as a director of Google Inc.

The Talk:
President Tilghman’s talk was about “Lessons Learned in 12 years at Nassau Hall.”  There were nine lessons in all:
First: Watch your tongue…what you say can, and will, be held against you.  Very early in her tenure, she made a pro-diversity comment…that Princeton should have “more people with green hair.”  What might have been perceived as a flip and intemperate remark later came to pass with the awarding of the prestigious Pyne Prize to one Alex Barnard, who, in fact, had green hair cut into the shape of a 6-inch Mohawk. “Vindication” was Tilghman’s take on this. Barnard returns in lesson number nine.

Second: When you make a mistake (and you will) admit it and fix it quickly, and, if necessary, apologize.  This lesson was offered by legendary CEO Peter B. Lewis of the great class of 1955 while flying private to California to negotiate with Frank Gehry on the design of the Lewis Library.  Given the controversy surrounding the Lewis Library, the irony here was delicious.

Third: Deliver the same message to all your constituencies.   This advice came from Marsha Snowden, long-time Presidential assistant who recognized that pleasing students, faculty, alumni, staff, and government officials would be difficult and could be done only if one sang the same song to all the different groups.

Fourth: The University is a Hedgehog, while Google, on whose Board Ms. Tilghman served, is a Fox.  The Google board decided on the $4 billion purchase of YouTube in five days. Whereas a University takes “forever” to decide something, starting with a committee, followed by a task force, followed by a working group, etc. etc.  She believes that hedgehog model is appropriate for the university, where consensus building is necessary and appropriate.

Fifth:  Bottom Up beats Top Down.  Here she described the creation of the neuro-science initiative where she tasked the proposing professors to determine the feasibility of such a center for actually teaching students and a research agenda that could be effective in the absence of a medical school.  They did and she green-lighted what she believes will help Princeton maintain its leadership in scientific research just as bio-medical did in previous decades.

Sixth:  Struggling (present tense) with the role of Athletics.  She feels that Princeton does it “just right” by insisting that every participant be, indeed, a student-athlete.  No corners are cut on admissions and no athletic scholarships are given.  She wishes other Universities operated on the same principles.  Athletics are important because the individuals AND Princeton benefits from the school spirit that results from winning teams.

Seventh: Faculty Excellence is Critical, but so is Staff Excellence.  She described the vibe among Princeton staff is that “we’re flying in formation.”

Eighth: Diversity and Educational Excellence go together and are necessary companions in a leading institution.

Ninth: Love of Princeton among the alumni is unique. She told of her third day on the job when Reeves Hicks, who was in the audience, and two colleagues from the great Class of 1946 visited her and asked her to become an honorary member of their class. That meant so much, given she was born in 1946. “The alumni love this place so much, that they make a natural cheering section.”  She concluded by quoting green-haired Alex Barnard as he accepted the Pyne Prize.  “I probably don’t look like anyone you would expect to be receiving this prize, but I assure you that when I cut my finger, I bleed orange with the best of you.”

Questions:
Town-gown relations: I’m optimistic because relations with the new powers that be are “night and day” different.

Her plans: sabbatical at Royal Society of London to study British success with governmental science policy…and to be a “great grandmother” (no, make that a GREAT grandmother).
How being a woman helped or hurt:  Now gender of the Princeton President is off the table.
Her tombstone epitaph: “She is resting.”

Her role in the movie “Admission”: Watching movie stars with the rest of you…that’s it.
Challenges facing the next President of Princeton:  a) Staking out Princeton’s position in the global education market: b) managing on-line education; c) federal funding of university research…a social contract at risk.

Affirmation Action possibly being struck down by the Supreme Court:  We’ll substitute income criteria if other characteristics are forbidden.

Transfer Students:  We accept none because a late-arriver doesn’t experience the social integration of Princeton, nor does a transferee receive senior thesis preparation.

In the service of all nations:  Princeton offers the overseas bridge year (an example of a top-down initiative) and depends upon alumni through programs such as those of the classes of 1955 and 1969 that provide opportunities for service.

What is going to be the fate of the large public universities:  Dire.  State funding is now 6% and, for example, University of Virginia is for all practical purposes a private university.

Aging faculty: While “first tenure track jobs” are now going to people in their 40’s, this is mostly in the bio sciences. Other disciplines are not being affected in that way. What’s going on is the baby boomer mouse is going down the belly of the faculty snake. She feels there are too many PhD’s, leading to the LaGuardia effect, where the newly created are forced to just circle and circle and circle.
What’s up in Brazil, China, and Saudia Arabia: Partnership agreement concluded with University of Sao Paulo, Latin America’s finest; in talks with Tsing Hua University in Beijing, where, with admitted arrogance, she feels “we have a lot to teach them” about being a world-class University; she’s a director of King Abdullah University, a fully co-educational graduate level science and technology institute endowed in perpetuity by the Saudi King. She’s very happy with the promises that were made, and are currently being kept, with regard to women’s issues.

The Decline of Math and Science performance in American High Schools:  Mostly a problem of disparity.  Princeton High School remains fabulous; Trenton Central High School a disaster and needs lots of help.
​
Time ran out before she could be asked what, if anything, she had learned while hanging out with Princeton students on Prospect Avenue at 2 in the morning.