Blessed are the Organized:
​Grassroots Democracy in America 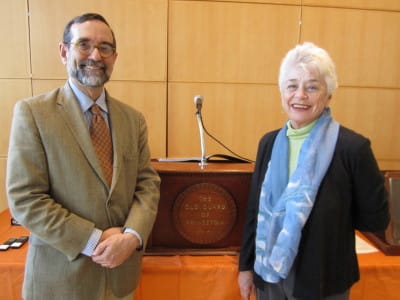 Jeffery Stout, speaker   Ruth Miller, introducer
Minutes of the 26th Meeting of the 70th Year
The President called the 100 attending members to order for the 26th meeting of the 70th year at 10.15 o’clock sharp, and Don Edwards conducted the usual musical overture. Lee Neuwirth read his succinct minutes of the previous talk. There were no guests. Jock McFarlane, Program Chair, announced the details of an extra meeting on 23rd May at which the speaker originally set for 2nd May would speak, while on 2ndMay the talk would be on India. The President reminded members of the group photograph to be taken in a fortnight’s time.

Ruth Miller introduced Jeffery Stout in glowing terms. He had a long career as an enabler of people power, despite his earning a doctorate at Princeton. He was active in the civil rights movement, anti-war protests and coaching soccer. At present he is the Professor of Religion at this university.  In 2007 he became President of the American Academy of Religion. Author of several books, his recent work bears the title of his talk, "Blessed are the Organized: Grassroots Democracy in America."

The speaker drew upon his knowledge of post-Katrina New Orleans. Opening with a startling account of the campaign of some politicians and developers to seize on evacuations as the opportunity to disenfranchise the black populations of poor districts like the lower 9th Ward allowing rebuilding on a more profitable basis, he gave a chilling picture of thee failures and successes of grassrroots democracy. If he recounted a medley of intricate detail, the picture which emerged was not difficult to grasp.

The scene could be described as the exercise of power from above, or from below. Those on the top are able to exert power through money and, just as important, organization. Likewise, the power of citizens is effective only if it is organized. Founded in 1940 by Saul Alinsky, the Industrial Areas Foundation (IAF) had a New Orleans affiliate called the Jeremiah Group, consisting of dues-paying churches, synagogues and parent-teacher groups. It works toward two objectives: setting up face-to-face, one-on-one contacts between ordinary people, and, second, identifying and cultivating leaders from within the communities. Such leaders are trained to form their agenda, not from top-down schemes already fixed upon, but from needs expressed from the bottom.

Implicit in his talk was the conviction that corporations, financial interests and government bodies, while using the language of democracy and the public welfare, have unexpressed contrary objectives.  Happily, his story ended on a more hopeful note. The 150 unincorporated shantytowns in Texas called colonias which had grown up for the displaced had seen effective local democracy produced. But no one seems aware of that, which is one reason he writes about it.

Questions elicited that Princeton students vary in response to his books all the way from not seeing a problem because they see themselves as destined to have access to power, to those who are dispirited by the emptiness of the very jobs that they look to grant them financial privilege. and a fulfilling style of life. Asked about the Tea Parties, he regarded them as showing a conflict between views expressed from below and top-down manipulative agendas. Follow the money is the key. Crucial is the question of where the money and information come from. Asked about the Obama presidency, he felt that despite the community-organizer rhetoric, a preference was shown for top-down governance by the handling of thee healthcare debate, the selection of financial advisors and the staffing of the State Department. Answering another query, he believed that social media is no substitute for personal contact.