March 28, 2018
​
The Scarcity Mindset and Its Implications 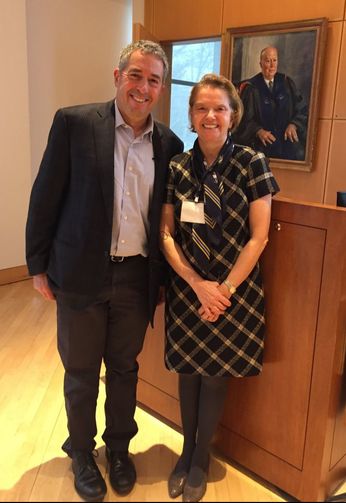 President Jock McFarlane called the meeting to order at 10:15 a.m. in the Friend Center. The invocation was led by Julia Coale. The minutes of the March 14 meeting were presented by Julie Denny. There were 105 in attendance, with the following members and guests: Everett Kline introduced William Kolata; Ruth Scott, Barbara Fant; Julian Kestler, Richard Hankinson; and Gregg Dobbs, Mark Bergman.

President Jock McFarlane called the meeting to order in the Friend Center. Introduced by Miquelon Weyeneth, our speaker was Eldar Shafir, Class of 1987 Professor of Behavioral Science and Public Policy at Princeton and the inaugural director of Princeton’s Kahneman-Treisman Center for Behavioral Science and Public Policy. After serving in the Israeli military for three years, he graduated from Brown and received his doctorate from M.I.T. Professor Shafir speaks five languages. His presentation was “The Scarcity Mindset and its Implications.”

Dr. Shafir said the circumstances surrounding poverty cause continual emotional and mental strain.  The lack of money and fear of future problems shape mental associations, become all-consuming and interfere with daily life.  The need to constantly juggle income and expenses affects attention, cognitive resources and resulting decisions. Despite these struggles, people in poverty face derision and disrespect rather than admiration and support. For people in poverty, behaviorally informed programs must show appreciation for the context of the situation.

To back up his argument, Dr. Shafir presented a series of facts and research studies demonstrating the power of context.
The contexts of scarcity produce their own psychology. It is not surprising that the poor who are tunnel focused on their lack of financial resources are less likely to take their medications, more likely to seek high interest payday loans and show less attention, consistency and engagement with their children.

A Census Bureau report in 2011 reported that 100 million Americans live either in poverty or just above it.  A 2008 study reported that within a 12-month period, 90 percent of low- to moderate-income households experience major illness or medical expense, eviction or bankruptcy filing.

Why don’t those of us in relative prosperity seem to care or help these people to a greater extent? Part of it is perspective. A 2011 Heritage Foundation report said that many poor in America have air-conditioning, cable TV and microwave ovens. Jon Stewart looked at this and said “I’d never realized that poor people in this country had it so good. No wonder the middle class is pouring into their ranks in droves.”

Dr. Shafir says it is all about context. Adam Smith wrote in “The Wealth of Nations” in 1776 that a linen shirt, for example, is not a necessity of life. The Greeks and Romans lived very comfortably though they had no linen. But in the present times in Europe, a creditable day laborer would be ashamed to appear in public without a linen shirt.”
Context matters. In a series of studies conducted this year, Dr. Shafir and colleagues went into that bastion of market research, the Quaker Bridge Mall, and asked shoppers to judge the competence of a selected group of “faces” based solely on what they were wearing. Identical pictures, just different shots from the chest up. In all studies, the competence ratings of well-dressed (rich) faces were judged to be higher than that of poorly dressed faces.

Because we all have limited bandwidth, and that bandwidth is affected by the need to satisfy an immediate need, scarcity impacts every part of our lives. Scarcity demands attention. The starving person cares only about getting food. Scarcity is persistent; It doesn’t let go, is distracting and lowers performance.

But Dr. Shafir argues that scarcity is a function of one’s environment, not just income. If you are among the fortunate in the lower-income cohort, you have family and friends, perhaps some buffer savings and maybe insurance to deal with suddenly arising health issues. This will mean fewer scarcity challenges at the same level of income as those less fortunate. But designed welfare programs along with a hard daily life, can make things more difficult.

Institutions can ameliorate the challenges of the scarcity mindset by providing predictable work hours and pay, child care, insurance, transportation and low-interest loans. After studying scarcity for three decades, our speaker showed a picture of an airplane cockpit and said that life’s cockpit should be designed with scarcity and bandwidth in mind…because it is the only bandwidth we’ve got.