Not Your Father’s Drums 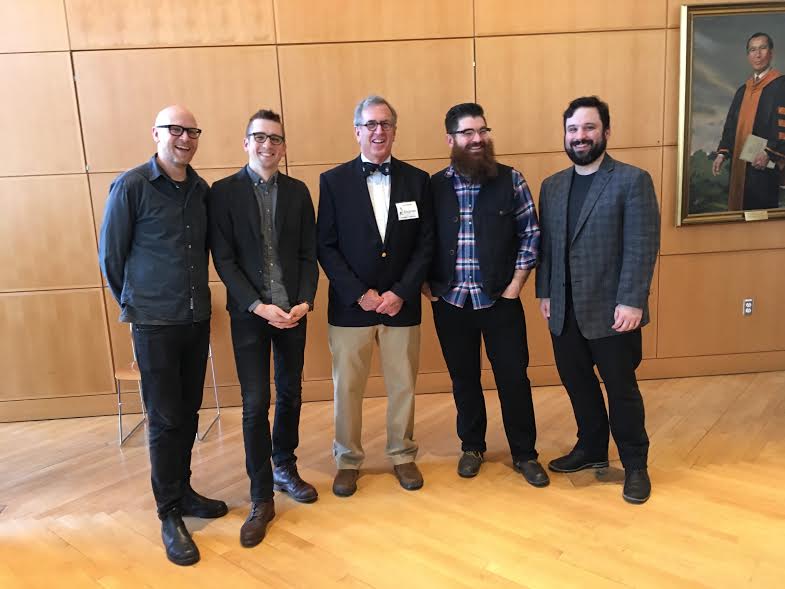 Minutes of the 26th Meeting of the 75th Year

On March 29, 2017, at 10:15 a.m., President Jock McFarlane called to order the 27th meeting of the 75th year of the Old Guard. The invocation was led by Roland Miller. Ruth Miller read the minutes from the March 22, 2017, meeting. Two guests were presented. Joseph Giordmaine introduced his wife, Mary Giordmaine and Marue Walizer introduced Marcia Snowden.

President McFarlane announced that the April 5, 2017, meeting, with Hospitality preceding at 9:30 a.m., will be held at the Andlinger Center. The speaker is Will Dobbie, assistant professor of economics and public affairs at Princeton. His topic: What Works in Education? Lessons From Charter Schools.

Because the Program Committee will meet on April 12, 2017, he also encouraged members to send suggestions for future speakers to the committee’s chairman, Stephen Schreiber.

Stephen Schreiber introduced the four members, Eric Cha-Beach, Josh Quillen, Adam Sliwinski and Jason Treuting of Sō Percussion, the Edward T. Cone Performers-in-Residence at Princeton. All Yale School of Music alumni, they now offer educational work, present a series of concerts and run the Sō Percussion Summer Institute at Princeton. They are co-directors of the Bard College Conservatory of Music and have performed recently at Lincoln Center, Carnegie Hall and Alexander Hall, as well as in dozens of other national and international venues. “Sō Percussion has redefined the scope and role of the modern percussion ensemble,” Mr. Schreiber said in his introduction.

Speaking for the group, its founder, Jason Treuting, described the presentation to come as one with “portable arrangements,” where they play a “hodgepodge of found sound.”

They began by performing a relatively new piece, “Baby Bot,” by a Princeton alumnus, Andrea Mazzariello, demonstrating that hodgepodge approach.

They then spoke of the evolution of percussion. Percussion in early European music was used to denote the exotic -- castanets to denote Spain, as an example. That changed in the 1930s and ’40s when the composer John Cage, “a wonderful wacky guy,” began composing for “things you can make music from.” They performed Cage’s “Living Room Music,” so named because all of the timpani instruments were found objects in a living room. Percussion no longer had to be in the back of the orchestra.

Throughout their performance, the group used nontraditional instruments, including a book, a table, a garbage bin, a coffee cup, a knife, whistles, soda cans, a plastic cup, a bread basket, wooden blocks, terra-cotta planter bases, pipes and glass bottles (all of various sizes to achieve different pitches), computer and smartphone keyboards, scissors, stapler, snapping fingers, tapping feet and even, occasionally, their voices.

You had to be there.

Each musician played from a score with intense concentration. Observing them play off of each other, watching and nodding, with no apparent conductor, brought to mind a chamber group and, indeed, later in the program they confirmed the classical string quartet as their model.

After Cage changed the perception of timpani as an indicator of “other,” however, there was a percussion drought until the early 1970s when Steve Reich, began using percussion as his voice. His compositions showed influences from Ghana, Bali and Indonesia, where Reich had studied. Percussion as stand-alone music was quite common in non-European cultures.

To illustrate, they performed Reich’s “Music for Pieces of Wood,” using only blocks of wood of different sizes to generate different pitches.

Finally, they spoke of their own collaborative compositions, saying they sometimes use a language all their own. They play with their own words, they search for different ways to set a haphazard mix of consonants and vowels to various rhythmic patterns and they sometimes engage their audiences, as they did in the penultimate piece, “Amid the Noise.” Members of the Old Guard performed admirably, though we shouldn’t quit our day jobs.

They concluded with another of their own pieces, “Life Is a Blank” and opened the floor for questions.