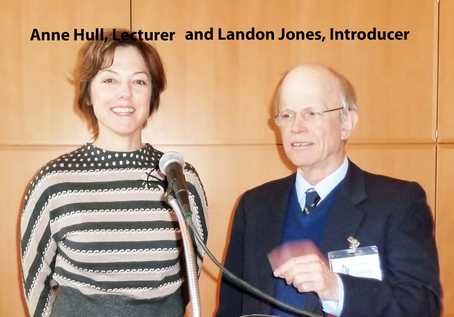 The minutes of the March 23 meeting were read by William Burks.

Landon Jones introduced the morning’s speaker, Anne Hull, a Washington Post national reporter and visiting journalist at Princeton University. Her presentation was “A Reporter’s Story: Uncovering the Walter Reed Medical Scandal,” a subject for which she and her colleague, Dana Priest, received the 2008 Pulitzer Prize for Public Service.

Before moving on to the Walter Reed story, she wanted to talk about the state of journalism in America.

“Every day we wake up and read our own obituary,” she said. “We’re not needed, we’re not wanted and no one is willing to pay for our services any more.

She said that she came to us working “in the most privileged condition” and that only a handful of newspapers can provide the resources for original reporting.

That kind of shoe-leather reporting has eroded to a shocking degree. What we have in its place is what she terms “click and drag” journalism, lifting and publishing items off the Internet. The rest of the country is really suffering without local watchdogs looking to see what’s happening in their towns, she said, adding, “That’s my soapbox rant, and I feel very strongly about it.” And from my perspective as an editor for The New York Times for 34 years, I strongly concur.

When her first Walter Reed article was published in The Washington Post on February 2007, “in 10 days, the Secretary of the Army lost his job, so did the Army Surgeon General and the commanding general at Walter Reed Army Medical Center.”

Ms. Hull said the Walter Reed articles began in the “simplest, most old-fashioned of ways, with a tipster calling the newspaper with incredible allegations. The person basically said: I’ve been up there in a volunteer capacity, and I’ve seen some things that concerned me.

Ms. Hull pointed out that at the time it was hard to believe that Walter Reed could be anything less than a perfect institution. The 110-acre facility three miles north of the White House was the gold standard of care in the military. For years the media had helped convey that image of Walter Reed. While there’s a hospital there, there’s also a massive medical complex. She said that if you were a retired four star general and needed hip replacement surgery, you would get your surgery at Walter Reed hospital and then convalesce at what amounted to a Ramada Inn hotel on the grounds there.

So it was hard to believe when the tipster said things didn’t seem right at Walter Reed.
Ms. Hull knew her way around the hospital from a story she had done earlier on what she described as spectacular care for the wounded.

The two reporters decided to go onto the post without permission, fearing a scripted tour of Walter Reed otherwise.

They never lied about who they were, but the trick was never to be asked: Are you a reporter? They blended in, looking like Army wives.

When soldiers are wounded and start their recovery at Walter Reed, they spend about 10 days in the hospital and then become out-patients.

Ms. Hull said: “We came to Walter Reed and there were 1,000 outpatient wounded soldiers living on this campus. We couldn’t believe it. There were soldiers stuffed everywhere. It was a civilization of hidden, wounded soldiers.

“When a soldier is wounded and he’s up there for so long, who comes but the wives, the girlfriends, the mothers.” Ms. Hull said that the women were living in these rooms with the wounded for as much as two years and that it was the wives who first talked to her.
The soldiers eventually opened up to the reporters. “There was great risk on their part,” Ms. Hull said. They were wounded and depending on the Army for their medical and psychological recovery. But they were also afraid that if they complained publicly they would be punished in disability hearings and not receive any money after leaving the Army.

Ms. Hull early on met Staff Sgt. Dan Shannon, an Army sniper for 16 years and a real soldier’s soldier. An Iraqi had shot him in the head and he lost part of his brain, one side of his face and an eye.

Ms. Hull said he was released from the hospital after 14 days and given directions to his barracks on Walter Reed: “There was no nurse to help him, no one to escort him, he was altered on pain medication, he had vision in only one eye, the rest of his face is covered, and he’s given a little lousy map of how to get to his barracks. And he’s literally sliding along the building walls in disorientation to get to his barracks at Walter Reed. That story was very common among many we heard. The soldiers received excellent care in the hospital but the minute they were discharged and put into the larger Army bureaucracy at Walter Reed they were completely neglected.”

The reporters focused their attention on the aftercare.

Dan Shannon had been at Walter Reed for a year and half, with his wife and three kids in a one-bedroom hotel room. The Malone House, where formerly some of the colonels and generals had recovered after surgeries prior to the war, was a 260-room hotel. “You walked into this place,” Ms. Hull said, “and it is nothing but 22-year-old wounded soldiers with limbs missing, with terrible head injuries, their heads in halos, accompanied by wives and girlfriends. It is something that’s truly surreal, the sheer number of wounded that were in that hotel.”

The Army saw the wounded soldiers at Walter Reed as soldiers; the soldiers saw themselves as patients.

“This was in some ways a story of a million paper cuts,” she said. A story of bureaucracy that certainly juxtaposed the idea of the Army and government promising to give the best care to our soldiers but failing to do so.
Then there was Building 18.

Most of the soldiers were staying inside the gate at Walter Reed, Ms. Hull said, but the Army had started using this old motor lodge across the street, 70 years old, really in disrepair, to house overflow wounded soldiers, mostly patients with mental problems from the war.” Building 18 had moldy carpets, hardy roaches and the walls were peeling down.

“Probably for us this was the symbolic core of this story,” Ms. Hull said. “If the Army and the Government promised the best care for these guys, this is where they’re living. Building 18 became our touchstone.”

From the moment the story was posted, the outrage was visceral because we have 25 million veterans in this country and they were angry.

Real reform came out of the Walter Reed stories. Building 18 was closed and all the soldiers were moved out.

Ms. Hull said she now goes around to small towns in America and writes about kids who are signing up for military service, trying to give attention to the people who have done the real sacrifice in Iraq and Afghanistan.
​
Respectfully submitted,
Roland Foster Miller