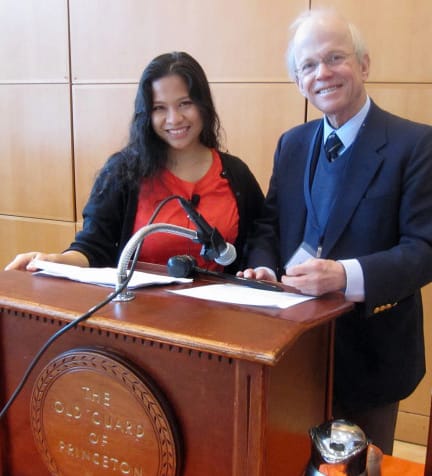 The 21st meeting of the 73rd year of the Old Guard was called to order by President Owen Leach at 10:18 a.m. The invocation was led by Art Eschenlauer. Nick Wilson presented the minutes from the previous meeting.

Prior to the start of the meeting, the 83 attendees who braved the cold and slush for today’s stimulating discussion, enjoyed a satisfying 45 minutes of our Hospitality Hour with coffee and sweets.

Our speaker today, Noy Thrupkaew, was introduced by Lanny Jones. The topic of discussion was “Human Trafficking and Labor Exploitation.” Ms. Thrupkaew is currently a visiting professor of Journalism at Princeton and she has made a career and living, working as a freelance writer.  She has done investigative reporting and has written extensively on the topic of human trafficking.

Ms. Thrupkaew’s interest in human trafficking, which she later defined as “The use of force or coercion to harbor or transport individuals for the purpose of benefiting from their labor”, was aroused about 10 years ago during a life crisis therapy intervention.  She recalled to us, in her own personal and sensitive way, how her childhood caretaker, a victim of domestic worker trafficking, had been hired and then abused by Ms. Trupkaew’s family members. Following therapy, she embarked on her investigations of the complexities of the industry known as Human Trafficking.

In her classroom at the University she has emphasized to her students that when they investigate and write they must take into consideration their mission and reality.  They must look at their subjects and assess what has been said and promised by their subjects against what the subject has actually done and produced. When she looks at what we have promised about human trafficking and what we have actually done, she is extremely disappointed.

How does human trafficking happen?  Ms. Thrupkaew noted that according to some experts, human trafficking happens when need meets greed.  But, she added an additional dimension: human trafficking also happens in an environment where workers have been excluded from protection or denied the right to organize and protest.  She believes it happens in places where elements of slavery have been enshrined in economies, laws, and institutions which we think keep us safe.  During her investigation of Thai farm workers, who legally entered the U.S. through a recruiting company named Global Horizon, she found violations of workers’ human rights and a consistent pattern of multiply layers of plausible deniability between growers, contractors and distributors who had their hands in reaping the profits of their victim’s labors.

Her investigation made her question the entire supply chain of products with respect to the work of laborers who bring products to market.  She challenged us to ask ourselves the question: what would happen if we demanded that the companies we support in our daily lives eliminate from their supply chain those products that are made through the use of exploited labor.  Such a decision, she believes, would change a broken system worldwide; a system that we unwittingly and unwillingly benefit from.

In terms of what has been done to address human trafficking, she feels that the response has been poor.  Most cases involving trafficking victims are handled through criminal justice systems.  In many countries the police are part of the problem.  Some studies show that 40 to 60 per cent of victims of sex trade trafficking are raped by police.  Many victims are arrested and, in the case of adults, their mug shots may go on line and they are forced to register as sex offenders.  As a consequence, the victims are tagged with a criminal record for the rest of their lives. With respect to cases involving domestic, agricultural workers, or factory workers, they face the risk of deportation because employers are quick to call immigration officials when workers protest or strike.

Law enforcement has done very little with respect to enforcing laws or prosecuting traffickers.  It is estimated that of 21,000,000 million victims worldwide, we have identified only 50,000 cases that we have helped.  There has only been 4,000 convictions of traffickers worldwide and only about 300 of these convictions are related to labor type of trafficking.  She reminded us that 68% of all trafficking involves labor.
Ms. Thrupkaew believes that part of the effort to dismantle the system of human trafficking requires working alongside with the trafficking survivors.  Survivors are banning together and addressing their grievances to employers, the courts and government officials.  Some of the techniques used by these emissaries of hope mirror the Civil rights movement of the 1960’s.

In conclusion, the speaker summed up her discussion by saying that our individual well being cannot be separated from that of others.  Our prosperity is no longer prosperity as long as it is pegged to other people’s pain.  She feels that we have a shared history with human trafficking survivors and that shared history demands recognition, redress and reparation to victims.  She strongly believes that our work must be to tell this story together.

Questions: as usual a number of thought provoking questions (12 in total) were addressed to the presenter today by our members! Questions ranged from the need for a clarification on the definition of Human Trafficking to the very problematic issue of Guest Worker Programs in the U.S.  One Old Guard member even raised a tongue in cheek question pertaining to whether or not graduate student teaching assistants fell into the category of Human Trafficking!