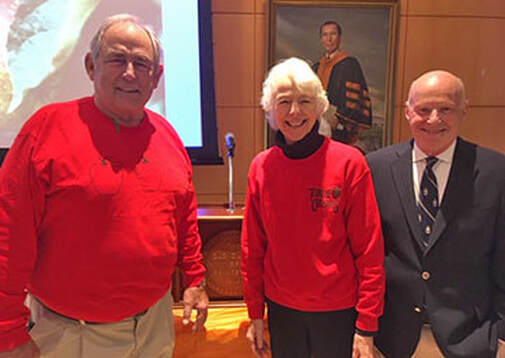 Minutes of the 22nd Meeting of the 78th Year

President Julia Coale called the 22nd meeting of the 78th year of the Old Guard of Princeton to order at 10:15 AM on March 4, 2020, with 107 in attendance. Shirley Satterfield led the invocation, and Nancy Becker read the minutes for the February 26, 2020, meeting. Jack Wallace introduced his guest, Len Berlik, and Howard Buckwald introduced his guest, Helene Buckwald. President Coale asked for a moment of silence to remember Old Guard member Mellick Belshaw, who died recently.

Henry Von Kohorn introduced our speakers, Gary and Pam Mount, owners of the nearby farm, Terhune Orchards. Henry recounted an anecdote about going to the farm store to buy a pie for Thanksgiving. When asked how many pies they expected to sell for Thanksgiving, Gary replied, "10,000"!

​A text placed on every chair provided a preliminary glimpse of how Gary Mount went from a farm near Princeton on Route 1 to Princeton University (where he earned a B.A.) and then back to a farm. With 11 generations of farmer ancestors behind him, he had always aspired to being a farmer. Farming was in his blood.

Click here to read "A Farmer Boy Goes to Princeton," by Gary Mount.

Gary and Pam Mount addressed, in tandem or separately, the various issues that affected them over the course of thirty-five years of farming. Gary grew up on his father’s farm – an apple orchard on Route 1 – whereas Pam was a child of the suburbs. She has/had artistic aspirations and considers herself as the creative component of the team. The Mounts were eventually joined, in the farm business, by their two daughters, both Princeton University graduates. The presence of grandchildren has inspired them in various ways.

The Mounts bought Terhune Orchards in 1975. The farm comprised 55 acres. They subsequently acquired three other farms. The combined acreage is 250.

Before becoming farmers, the Mounts spent several years in the Peace Corps on an island in Micronesia. There, they learned valuable lessons about sustainability. On that island, nothing could be taken for granted. When they became landowners, they became “stewards of the land.” Sustainability was good for the long term. Sustainability was not only about cover crops and crop rotation; it was also about paying their workers well. In that way the Mounts provided their staff equity in the success of Terhune Orchards. Many of those who work for them have been in their employ for 25 years or more.

Gary and Pam Mount have also been very engaged in preserving farmland. They have sold the development rights to their land and that guarantees the presence of open space in perpetuity. They have also been very active in influencing the state of New Jersey to acquire farmland that otherwise would have been developed.

The Mounts have embraced modern technology as a mean to enhance their farm. They employ drip irrigation to assist with water conservation. The rooftop solar panels on some of their buildings produce 50% of the electricity for the big barn. Sixty percent of the electricity used by the farm is free, thanks to the sun. Thanks to technology, the underground apple storage facility has only two percent oxygen in the air. That allows apples that have been picked in the fall to survive in prime condition until the next harvest.

Terhune Orchards grows much more than apples. The Mounts’ vegetables are certified organic. They try to avoid the use of herbicides and pesticides. As Pam Mount put it, “We have reinvented the hoe.” They have an integrated pest management regime. They employ an insect trap to catch the various insects that are visiting their fruits and vegetables. That allows them to identify what pests are present in their gardens and orchards. They also place sticks that carry the scent of the female moth in their peach orchard. The male moth is lured by the scent and, hence, does not locate the female. That, in turn, means that the female’s larvae will not be fertilized. The Mounts also use plastic, both black and white, as a means of stifling the growth of weeds. They also use unheated greenhouses to grow various cold weather crops such as kale and other winter-hardy greens. The ability to grow crops without the use of artificial heat makes for significant savings.

The Mounts also have their own weather station that is connected to Cornell’s School of Agriculture. The weather station guarantees them immediate and very local readings of the weather conditions at Terhune Orchards. They also pointed out that they are beholden to the Rutgers Agricultural Extension Services.

Terhune Orchards produces a great diversity of crops. There are 35 varieties of apple trees, five types of carrots, 25 varieties of tomatoes, and 20 kinds of squash. They also produce wine from their nine acres of vineyards. These grape varieties comprise both Vitis vinifera and hybrid varieties. But grapes are not the only source of Terhune Orchards’s wine. Wine is made, as well, from apple cider, blueberries, and peaches.

Gary and Pam discovered early on that having seasonal festivals such as Apple Day, Blueberry Bash, Peach Festival, and Arbor Day attracted a great many visitors and customers. They were pioneers in this kind of “at the farm” festival which they inaugurated in 1985. In the early days, Terhune Orchards attracted visitors to these events from as far away as Connecticut. Even on regular fall weekends as many as 12,000 customers will turn up.

Inspired by their grandchildren the Mounts turned toward educating children on various aspects of farming. Today, they provide school tours of Terhune Orchards, a seasonal newsletter, and summer camp. Showing preschool children how to pick their own asparagus is only one of several educational initiatives. In fact, “read and pick your own” has been a very effective “way to sell the farm.” What had once been only 20% pick your own has now mushroomed to 80% of what they sell.

The Mounts are also great enthusiasts of the “Farm to Table” process. Having local restaurants among their buyers is a big boon. And, of course, they are big exponents of “Buy Local.” Pam and Gary are not the only beneficiaries of all this, so is the local community.