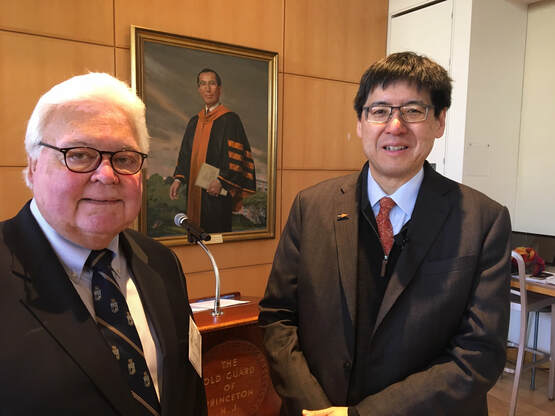 Minutes of the 21st Meeting of the 77th Year

President Julia Coale called the meeting to order at 10:15 a.m. following a 45-minute Hospitality Session. The invocation was led by Charlie Clark. Joe Giordmaine read the minutes from the previous meeting.

The next meeting on March 13 will feature Scott Burnham.

George Bustin introduced our speaker, Sam Wang, professor of molecular biology and director of the Princeton Neuroscience Institute. His first book, Welcome to Your Brain: Why you lose your car keys but never forget how to drive, was named Young Adult Science Book of the Year by the American Association for the Advancement of Science. He founded the Princeton Election Consortium using innovative statistical tools to determine Congressional representation. The institute won first prize from Common Cause for its work.

Professor Wang identified himself as a data scientist and provided the online site for his gerrymandering project: Gerrymander.princeton.edu. He described two gilded ages: 1880-1900, when there were racial divisions, technological disruption, increasing inequality, and deep partisanship; and 2000-2016, when there were similar issues and the same divisions of the population. Polarization incentivized candidates to do whatever it takes to win, and they played constitutional hardball.

There is strong evidence that historic alienation arises from partisan disenfranchisement. Gerrymandering strings together one side’s voters into a few districts, reducing their influence outside the district.  Professor Wang showed a website where one can find out how gerrymandered are individual states.

The fate of gerrymandering is uncertain. The situation in the federal courts is uncertain, but in the state courts there is more hope. For example, Pennsylvania’s Governor Wolf rejected the Republican map in a gerrymandering case. In terms of the new federalism, the system has to want to be fixed.

Federal election law may be an impregnable fortress. A 2018 case, Gill v. Whitford, was a case in Wisconsin where a lower court decided in favor of the Democrats who claimed gerrymandering. Its fate in the Supreme Court is not clear, because no decision was made and it was referred back to the district court. In 2019, the North Carolina gerrymandering case will be on the docket of the Supreme Court and its future, too, is not clear. The advent of Neil Gorsuch and Brett Kavanagh changes the chances of the court ruling against gerrymandering.

Professor Wang says that translating math into law could affect the outcomes of cases with implications for equality (or inequality) of opportunity. Four states passed redistricting reform measures in 2018. The Princeton Gerrymandering Project advocates for helping citizens talk back to redistrictors. There is a demonstration project in four states (Michigan, Pennsylvania, Ohio, and Virginia), which are being provided with redistricting software.

Part of the problem is that both public and private databases contain many errors. There is free data online being repackaged and sold with very little quality control. The Gerrymandering Project drew a fairer map for the Virginia legislature and a federal court has now ordered the Virginia legislature to redraw 33 districts. We need to provide people with the computational tools they need.

The next redistricting will be in 2021 following the 2020 census.  Empowering citizen input on redistricting is far cheaper than winning even one district.

There was a lively Q and A.  Other questions discussed the issue of asking for citizenship on the census, the Electoral College mismatches, and third parties.