A Journalist's Perspective
​on a Turbulent World 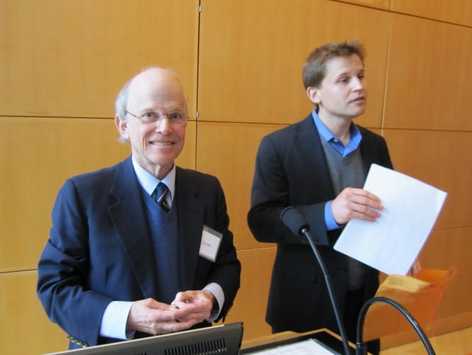 Roland Miller read the minutes for the meeting of February 27th, which featured a talk on “Education Through Athletics” by Gary Walters, Director of Athletics at Princeton University.

Jock McFarlane announced that the Spring Program beginning March 20th would be posted on the Old Guard website and sent to members via e-mail in the very near future, and that it would feature, among other notable speakers, the 19th president of Princeton University, the 9th director of the Institute for Advanced Studies, and the 1st mayor of consolidated Princeton.

President Miller mentioned the importance of the taking of good minutes for the meetings, and asked members interested in doing so to contact Roland Miller.

President Miller announced that the next meeting would be held on Wednesday, March 13th at the Friend Center at 10:15 AM.  The speaker is scheduled to be Diana Henriquez, a financial writer for the New York Times and currently visiting professor of journalism at Princeton.  Her talk is entitled "The Wizard of Lies, Bernie Madoff and the Death of Trust".

Landon Jones then introduced the speaker, Griff Witte, Deputy Foreign Editor of the Washington Post and currently visiting professor of journalism at Princeton.  Griff has been the Post's bureau chief in Kabul, Islamabad, and Jerusalem, and since 2009, its Middle East and Asian Editor. The son of Michael Witte, a member of Princeton’s truly great class of 1966, Griff was Managing Editor of the Daily Princetonian and, after graduating in 2000, joined the Miami Herald.  Present in New York on 9/11/2001 he reported on the destruction of the World Trade Center and remarked that many at the site believed Afghanistan to have been responsible, but no-one, including Griff, knew anything about the country.  Shortly thereafter, Steve Coll, who would win the Pulitzer prize in 2005 for his book "Ghost Wars: The Secret History of the CIA, Afghanistan, and Bin Laden", contacted Griff and asked him to research America's involvement in Afghanistan. Then, in the spring of 2002, Steve asked Griff to go to Afghanistan to interview 25 “War Lords”, a formidable task in a country with no infrastructure, no telephones, no paved roads nor identifying house numbers. Assured by his translator Mujib that finding and interviewing this group would pose no difficulty, Griff was amazed that Mujib was greeted and embraced by every “War Lord” they visited.  When asked how he had developed such excellent relationships, Mujib explained that, as well as being translator, he was also the local doctor and primary provider of Viagra, a drug critically important to the interview subjects.  Griff observed that the “War Lords” were “nice guys” happy to speak with Americans.  After all, they had been asking for American aid against the Taliban for many years, and were gratified that help was now actually here.

​Griff then segued to his main theme, changing his talk from the published “A Journalist’s Perspective on a Turbulent World” to “The Importance of Being There”, since it is only by "being there" that a correspondent can know (as Griff did) that the roars from Tahir square after an announcement by Mubarak were of anger and disappointment, and not of approval, as mistakenly reported by CNN from a site half a mile away; or that the underlying cause of an armed insurrection was not sectarian politics as reported, but only a fight between two warring local strongmen. Not "being there" makes for incomplete reporting, shorn of the insight provided by “feet on the ground.” Regrettably, "feet on the ground" are expensive and easily reduced or eliminated by newspapers under financial pressure.

Additional factors that threaten accurate foreign reporting are the following:

Americans no longer seem to care about foreign news. They have grown weary of suicide bombers and posturing despots. They prefer to focus on domestic problems, on which every reader has an opinion and can offer a perfect solution. Foreign issues are more difficult to understand and their solutions are intricate, and therefore best ignored.

Being a foreign correspondent is dangerous and uncomfortable work.  102 foreign correspondents lost their lives last year, and seven are currently missing in Syria, one of them a Washington Post reporter. Few journalists opt to work in the Middle East, shuttling between hotels with no running water, heat, or air conditioning and constantly on call to their stateside editors. Covering politics in Washington from 9 to 5 from a comfortable hotel room is a much better assignment.

Technology and the internet provide easier and cheaper access to foreign news than "feet on the ground."  Youtube, Skype, and the "citizen journalists" that publish free information on the internet provide easy and quick access to news, but it is news without texture, nuance or vetting. Every internet posting comes from an author with an agenda or bias, and recipients are therefore hostage to an interpretation without independent verification.

News is becoming local, and few see any advantage in being a global player. Warren Buffet's purchase of local newspapers is indicative that the advertising-based model of paying for newspapers only works locally. Global newspapers providing domestic and foreign reporting cannot cover their greater cost structures through advertising alone, and will have to find other sources of revenue, most likely in the "pay for internet access" arena.

Griff ended his presentation by asserting that journalists matter. Without their input, we cannot make good decisions, whether on domestic or foreign issues. American ambassadors in the middle east, increasingly prisoners in their embassies, venture into the local populace at great personal risk, with occasionally tragic results, as at Benghazi. As a consequence, they depend for insight into local conditions on reportage by the foreign correspondents of global newspapers. Griff left as an open and troubling question where such insight is to come from if foreign correspondents are no longer able to ply their trade, but he ended with a positive coda by his unstinting praise of the intelligence, curiosity, and engagement of the students in his class, and his hope that if they wanted to become journalists, that there would be work for them to do.