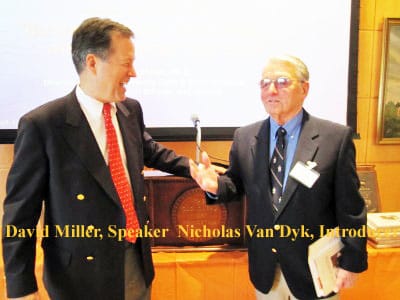 Minutes of the 23rd Meeting of the 70th Year
The twenty fourth meeting of the Old Guard’s 60th year was called to order by President Robert D. Varrin at 10:15 a.m. in the Friend Center at Princeton University. Following the announcements there was a brief discussion as to who would introduce our speaker. Nick Van Dyck won the toss and introduced David W. Miller, the founding director of the Princeton University Faith and Work Initiative and Associate Research Scholar in the Center for the Study of Religion. He comes to us from Yale University where, during the past five years, he helped to establish the Yale Center for Faith and Culture where he directed its Ethics and Spirituality in the Workplace Program. David has a “bi-lingual” perspective having spent 16 years in senior executive positions in international business and finance before changing careers by completing a Masters of Divinity degree as well as a PhD in social ethics at Princeton Theological Seminary.

David began by acknowledging several friends in the audience, especially his debt of gratitude to George Folkers, his professor of German at Bucknell. “One never forgets a special teacher,” he noted.

The stage was set by describing a class room at Yale where, on the first day, students from the school of management all sat one side and the students from the divinity school set together on the other side, each side viewing the other with measured disdain. The business school students were seen as money driven, governed by the will of stock holders and not much else other than personal survival and success.

The divinity students were described as naïve and out of touch with the real world. These attitudes and the seating arrangements changed over the course of the semester.

The objective of David’s teaching and consulting is to help both business people and church folk to  recognize the personal and social values of integrating their faith and work.

The words “Religion,” “Spirituality,” and “Faith” appeared on the Power Point screen.
“Religion” has come to mean the institutional dimensions of faith communities and has fallen out of favor among the baby boomers and their successors the millennials. “Spirituality” connotes a broad spectrum of personal or social awareness of a divine presence from mysticism to yoga. “Faith” is recognized as an affirmation (or not) of a divine presence in any and all traditions including agnosticism and atheism. Consequently, the inclusive focus of the project dictated the name “Faith and Work Initiative.”

Poll data and magazine cover stories show that increasingly business communities and young adults from all walks of life want to affirm their wholeness. A gay or lesbian worker wants that fact to be accepted and respected, so too with ethnicity, geographical heritage and faith. The widespread search for wholeness being demonstrated on campuses, in workplaces and many newer faith communities bodes well for more and more of us. However, the globalization of industries presents new challenges as differing ethical standards confront each other in the marketplace.

In addition to consultations in board rooms and other corporate venues David also brings to Princeton friends who are leaders in the business world for interviews on campus. Members are welcome to attend these events which are listed at www.princeton.edu/faithandwork/ .

Thoughtful questions were raised from the floor. David’s responses were graced by occasional humor and always a generous spirit.