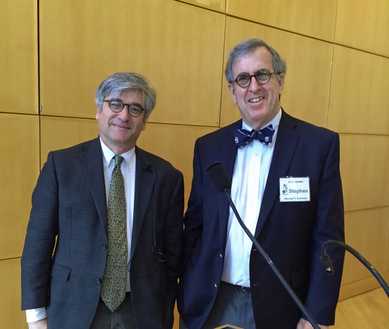 Gideon Rosen, Speaker, and Stephen Schreiber, Introducer
Minutes of the 23rd Meeting of the 74th Year
Jock McFarlane, standing in for Owen Leach, who was in the Caribbean celebrating the 54th anniversary of meeting his wife, called to order the 23rd meeting of the Old Guard of Princeton’s 74th year, with 102 members. Shirley Satterfield provided the invocation. Henry Von Kohorn read his minutes of the March 2 meeting.

As a Yale history major instructed to synthesize, in five minutes,  the Princeton PhD. and philosophy professor Gideon Rosen (you are all familiar with his popular “Modality: Metaphysics, Logic and Epistemology”), I sympathize with the Yale coaching staff tasked with containing Dick Kazmaier.

Professor Rosen, a distinguished philosopher, stated that “philosophy is still a thriving academic discipline, but it has lost contact with the world of ideas outside the university almost completely.”
He chose to speak to the Old Guard of Princeton about a problem of which he felt a part and had never tried to do anything about: the Black Lives Matter movement and its broader societal implications. Rosen touched on the Trayvon Martin and Michael Brown killings and the fact that in nearly 100 instances in 2015 of the police killing unarmed individuals, 40 percent were black.

Rosen wanted to know how we should feel about this, what sort of outrage is called for, where should it be directed and who’s to blame? He found those questions harder than he had initially thought. He stated that there is no sufficient moral justification for shooting and killing an unarmed person who is not posing a serious threat to anyone. But he did not accept that the persons who did it necessarily merited blame or condemnation or criticism.

Rosen dwelt on the term “reasonable” under the law.  He spoke of what a “normal, decent human being … with all of the normal imperfections” might do in the presence of “implicit biases” that are unconscious attitudes. He described experiments that reveal unconscious white bias toward blacks, which introduces a moral societal complication. The first was the mailing out of identical rḗsumḗs, with only the name changed.  Even people with no conscious racist bias favored “Scott” over “Jamal.”

More disturbing for Rosen was the so-called weapon bias. People were shown a picture of a face, either white or black, and then very quickly were shown a picture than is either a gun or an innocuous object like a wrench. Even people with no detectable overt bias, black or white, are more likely to misclassify a wrench as a gun, when they have been primed with a black face. Rosen said that he chose not to take such a test.

He spoke of the apparent complicity between prosecutors and police in many unarmed killings. Still, Rosen spoke of the difficulty in court of proving beyond a reasonable doubt that a police witness was lying. Rosen places this in the broader context of large-scale structural injustices that systematically disadvantage African-Americans from birth. Such structures are enormous and responsibility for them is diffuse. Some of the blame for the structures can be accorded to “straight up racists,” but much of our society also has tacit responsibility.

Rosen noted that “on the one hand, we are confronted with an outrageous system that is brutal in its effects, while on the other there is no clear villain.” For him, the trick is to sustain moral outrage at the structures — the practices, institutions and patterns — without focusing on obscure and often undecidable questions about where the blame for this injustice lies. Regarding individual cases, Rosen found that they were harder to decide than he had initially imagined.

Perhaps when Professor Rosen next speaks to the Old Guard he will select a less complex subject, such as “Why the F.B.I. Deemed Its Agents Faultless in 150 Consecutive Shootings.”