The Unsubstantial Air:
​American Fliers in the First World War 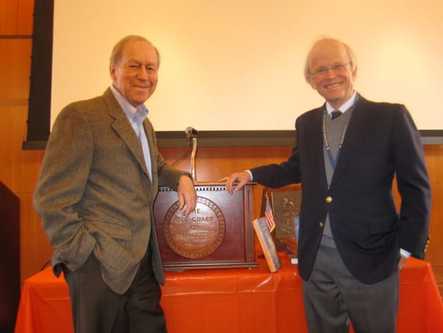 The President made several announcements before introducing Landon Jones, who introduced the speaker, Samuel Hynes, Woodrow Wilson Professor of Literature, Emeritus at Princeton University.  The topic was his recent book, “The Unsubstantial Air: American Fliers in the First World War,” the latest of a number of books by the author.

Sam Hynes, who is now 90, but seems many years younger, is an Emeritus Professor of Literature at Princeton, but a long time ago he was a Marine aviator in the Second World War (which means he was a Naval aviator who went through training as a Marine.)  He flew 78 missions in the Pacific as a torpedo bomber pilot, and somehow lived to tell about it (torpedo bombers were always considered to be sitting ducks.)  Years later, he wrote a book titled “Flights of Passage” about his experiences.  He has always had a great love of flying, and especially military flying, which came through clearly in his discussion of “The Unsubstantial Air: American Fliers in the First World War.”  He feels that there have been enough history books about wars, and what he wanted to write was a book about what it was like and how it felt to be a pilot back then.

As a young boy in Minneapolis, he and his friends would sit and watch Navy planes landing at a nearby field, and played “dogfight” during school recess.  After his military service, he remained in a reserve squadron while pursuing his other career, English literature, and never lost his love of flying.  During the Korean War he was recalled and stationed at Cherry Pt. MCAS in North Carolina, where he took every opportunity to fly the WWII fighters assigned to the base.  Later, when his daughter married an RAF pilot, the three of them took time off to fly the entire length of the Western Front to see how World War I looked from the air.

When the war began, in 1914, there was really no such thing as military aviation in this country.  The Signal Corps had a few planes which were used strictly as “untethered observation balloons” to get a better view of the enemy, but the planes were unarmed and obsolete.  The men who flew them didn’t know a thing about aerobatics, not to mention aerial combat.  A few Harvard and Yale “gentlemen students” were lured by the glamour and romance of War to go to France and enlist in the Foreign Legion, or become ambulance drivers, and these sometimes managed to move on to a French flying squadron, where they learned to fly without an instructor in the plane (or, for that matter, such niceties as a parachute!)

By 1916, some “ivy league” colleges had flying clubs (In November, Hobey Baker led a flight of 11 planes over the Princeton-Yale game) but there was still no military training. There was no previous generation of pilots to teach beginners how to fly and fight a war, nor were there any training fields, or factories capable of building airplanes.  In the meantime, both Germany and France were making great strides in technology, such as machine guns that were timed to fire through the propeller, and developing the skills needed in a dogfight.

When America finally entered the war in the spring of 1917, it was totally unprepared to fight a war in the air; most American pilots didn’t see action until well into 1918.  Congress had decided that all pilots should have at least a partial college education, thereby eliminating about 97% of potential applicants- and since college men, and especially Ivy League men, were all gentlemen, they should all be officers.  So they felt special, and they wore special uniforms, sometimes including spurs.  They were wild and hard drinking, they took trips to London and Paris, and they looked upon aerial combat as a sport like football, with rules, and scoring, and a certain amount of danger.

But gradually, as they began to see some of their fellow pilots die, many of them learned that it was more important to know how to survive than to be a hero; their outlook on war began to change, and they no longer spoke of chivalry and glory and romance.  When the war finally ended, while some of them went into barnstorming or flying schools, many others went back to their family businesses and began to raise families of their own.  They tended not to discuss their experiences, because you had to have been there to know what it was like.