A Kaleidoscopic Novel about the Father of the Atomic Bomb 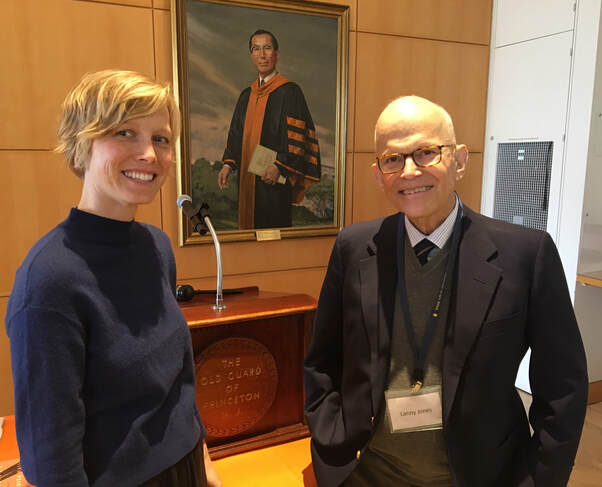 Minutes of the 26th Meeting of the 77th Year

President Julia Coale called the meeting on April 10, 2019 to order at 10:15 a.m. and asked Charlie Clark to lead the invocation. Joseph Mazzetti read the minutes of the meeting on April 3rd. Graydon Vanderbilt introduced Richard Kaye as a prospective member. Lanny Jones introduced his wife, Sarah, and his guest and past speaker to the Old Guard, Pia de Jong. The Convocation Room in the Friend Center was nearly full with 129 persons in attendance.

Lanny Jones welcomed the speaker, Louisa Hall, to the Old Guard and commented that as a novelist she was a departure from the "standard fare" we host on Wednesday mornings.  He said Hall’s novel, Trinity, explores the enigmatic life of J. Robert Oppenheimer by roaming over the uncertain terrain between fact and fiction, between past and present, between what we know about people and what we don’t know.

Just last week, she was shortlisted for the Dylan Thomas Prize, given to the best published literary work in the English language by an author aged 39 or under.

Ms. Hall is currently teaching creative writing at Montana State University, Bozeman, Montana. She grew up in Philadelphia and graduated from Harvard where, among other things she was the No. 1 player on Harvard’s women’s squash team and the top-ranked college player in the nation.

Louisa Hall began her talk with the observation that after she had read a very detailed biography of Oppenheimer, she still wasn’t sure she really knew him as a person and there were parts of him she didn’t really understand. That led her to examine the difference between biography and fiction. Virginia Woolf said that biography can only reveal the “husk of a man” and fiction can really get at the “atom.” Could she follow the example of experimental atomic physics where the properties of one invisible particle are discovered by its interaction with other particles and write a novel about Oppenheimer by examining his interaction with others?

The result is Trinity, which tries to reveal Oppenheimer through seven “testimonials” of fictional people who knew him in various stages of his life. The characters’ interactions are chronological and move closer to Oppenheimer as time progresses.

Hall chose the term “testimonial” to follow the format of the hearing in 1954 when Oppenheimer’s security clearance was revoked and testimony was given by many of those who knew Oppenheimer at various times in his life. She said the verbatim transcript of the hours of hearings was itself a valuable resource.

Hall read the first few paragraphs of four of the testimonials. They were from a young woman who is in the Women’s Army Corps at Los Alamos; a colleague and friend from the '30s who is working in Paris, because, after being named in the security hearings, he can’t get a job in the U.S.; Oppenheimer’s secretary at the Institute for Advanced Study; and a journalist assigned to interview Oppenheimer after his retirement.

The book also includes the story about Jean Tatlock, Oppenheimer’s first love in the '30s whom he spent the night with in Berkeley on a trip from Los Alamos and lied about it later. Oppenheimer’s wife, Kitty, was in Los Alamos at the time. That was an example of the lies and betrayals that were experienced by the fictional characters as well.

The hour at Old Guard was divided between readings from Trinity by the author and questions from Lanny Jones or the audience. She said her first draft had testimonials from real people – Jean Tatlock, Kitty Oppenheimer, and Oppenheimer’s daughter – before she decided to use only fictional characters.

Some of the questions from the Old Guard audience provided Princeton anecdotes. After his death, Kitty Oppenheimer donated all of his books to the Bryn Mawr Book Sale and many of the books contained his comments in the margins. Also, near the end of his life he was given an honorary degree at the 1966 Princeton commencement. As one, the audience gave a standing ovation that was a warm appreciation and vindication of his life.

At Oppenheimer’s security hearing, practically every friend he ever had was called to testify and asked if he could be trusted. At the end of the day, most said “I’m not really sure I understood him.”

Louisa Hall shared the result of her years of work creating characters that served to help her understand more about Oppenheimer. But then, she added, “Do we ever really understand anybody?”