The First Hundred Days of
​a Consolidated Princeton 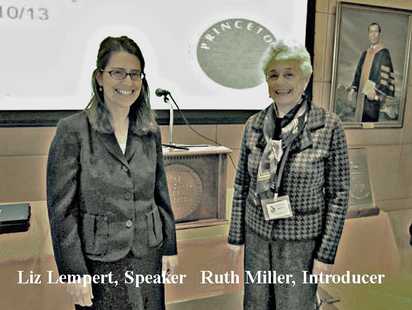 Minutes of the 25th Meeting of the 71st Year
The meeting was called to order by President Ruth Miller at 10:15 A.M., with 107 in attendance. Julia Bowers Cole led the invocation, and Jock McFarlane read the minutes of the preceding meeting.  Three members introduced guests: John Timoney’s guest was his wife Ana, Ramsey Vehslage’s guest was his wife Ann, and Clare Jacobus’ guest was her friend Bernard Miller, President of Princeton Council.

Ruth Miller announced that Old Guard member Jerry Rose had passed away, and asked meeting attendees to observe a moment of silence in his memory.

She then introduced the meeting speaker, Liz Lempert , Mayor of Princeton. Ms. Lempert attended Stamford University, was an editor and producer at NPR, and a community organizer during the 2008 Obama for President campaign. She then served on the former Princeton Township Committee for four years, including as Deputy Mayor, and on many Boards and Commissions.  Mayor Lempert and her husband have two children who attend Princeton’s Public Schools.

Mayor Lempert noted that her talk, “Consolidated Princeton - The First 100 Days”, was especially appropriate since today, April 10, 2013, is the 100th day of a consolidated Princeton.  She said she would cover  how the Princetons got to Consolidation, major first initiatives, how things are going now, and challenges ahead.

The successful consolidation of the former Princeton Borough and Princeton Township began in December 2009 with a joint Borough and Township government resolution creating a Consolidation-Shared Services Commission. Chaired by Old Guard member Anton Lahnston, the Commission evaluated consolidation and the option of increased sharing of services between the then two municipalities.  The Center For Government Research (CGR) was consultant to the Commission. In May 2011, following study, including public meetings, the Commission recommended Consolidation. A Resolution for Consolidation was approved by public vote in November, with a majority of 85% of voters in the Township, and 63% of voters in the Borough. The new municipality, called Princeton, has  a N.J. Borough form of government, with a separately elected Mayor and Council.

A Transition Task Force (TTF) was established to develop plans to meet the three promises of Consolidation: financial savings, improved services and a more responsive government.  The TTF established eight Subcommittees to develop those plans: Communications and Outreach, Boards, Commissions and Committees, Facilities and other Assets, IT, Joint Finance, Personnel, Public Safety, and Infrastructure and Operations.

In November 2012, voters elected a seven member Princeton Council comprised of the Mayor and six Council members. The new Princeton Council met to review the TTF’s recommendations, make Board, Commission and Professional appointments, and establish processes for the new governing body.  Then it assigned priorities for action in areas including must-do items, opportunities presented by consolidation, and broader policy objectives for the coming year.

Consultant CGR surveyed Staff, Council, Department Heads, and the public, to identify issues to be tackled and their relative importance, aggregated comments received, and sorted them into categories such as police, personnel and sustainability.  Council  then prioritized each of some 200 items. A Status Report three months into Consolidated Princeton showed nearly all Priority 1 items and more than half Priority 2 items were underway. Examples included creation of an Emergency Management Task Force, restoration of Community Policing, harmonizing salary and policy and procedures among the merged staffs, and fostering a strong, positive relationship with Princeton University.
Mayor Lempert then commented on what had been achieved so far in the three promises of consolidation.

Regarding financial savings, the 2013 Consolidated Princeton’s budget is $61 million, $3 million less that both municipalities’ budgets in 2012. Major expense increases in the 2013 budget are for garbage removal, contract negotiations with employee bargaining units, increased reserve for uncollected for school and county taxes, both collected by local government, and an emergency appropriation for storm related expenses.  Major expense decreases came from a reduction of 26 positions and a switch to the State’s Health Benefits program for employees.

Mayor Lempert noted that the Princeton government portion of the property tax bill would drop to 20% of the total tax in 2013, in part because of an 11% increase in the County tax portion which will dwarf the savings at the municipal level. She added  that in future, operating budgets that restructure labor agreements would pay a critical role in keeping taxes down, as would developing a long term debt management strategy maintaining Princeton’s AAA credit rating.

Turning to Improved Services, Mayor Lempert highlighted improvements in Public Works with trash collection extended to all residents, more flexibility in deploying staff, and quicker snow removal.
Improvements in Policing included more Officers on the streets, and return of the dedicated traffic unit and safe neighborhood unit.  Improvements in more responsive government have included more efficient decision making and communication, publishing agendas and full back-up material every Friday, and a concentrated effort to engage the public in goal setting and community visioning.
There have been some bumps along the way. Spring brush pick up is going slowly. There was what Mayor Lempert described as “A little bit of New Jersey in Princeton” occurring when a trash hauler who didn’t get the new contract reclaimed their trash containers from previous customers, dumping any trash in the container onto the streets. Salary harmonization has proven difficult, especially when employees from the former Township and Borough earn different salaries while doing the same work.
Other things have been going well. There is a universal feeling among Department Heads, Staff, and Council that we want to succeed, employees are moving beyond Borough-Township thinking; action has begun on long delayed projects such as building a new Public Works garage so that expensive Public Works vehicles can be inside when not in use, reducing vehicle maintenance and replacement costs.

Mayor Lempert then itemized some significant challenges ahead, both near term and long term. The former included salary harmonization, redevelopment of the hospital site, contributions from Princeton University and other tax exempts, and better management of Open Space. Longer term challenges include managing the property tax burden, engaging citizens and sharing information, protecting diversity, and adapting while preserving our identity.

Mayor Lempert concluded her talk by sharing a personal challenge, adapting to being more in the public eye than in her previous assignments where she had been more behind the scenes. She illustrated this by showing a news item from the “Princeton Packet.” Dated January 7, 2013, just six days after Consolidated Princeton came into being, the item read in part “Mayor gets parking ticket” ... “two weddings performed”....

In the time remaining before the meeting was adjourned at 11:30 A.M., Mayor Lempert answered questions from attendees:

Q: What is happening with the former hospital site?  A: Avalon Bay has sued the Planning Board and The Town. The issue is in discussion among the parties, hopefully leading to some redesign of the proposed development and resubmission to the Planning Board in the near term.

Q:  Has Council spoken with the N.J. Department of Community Affairs about taking the story of Princeton’s successful Consolidation “on the road”?  Princeton was promised reimbursement of 20% of the cost of Consolidation. What is happening?  A: The reimbursement matter is in discussion.  There is tremendous interest in Princeton's consolidation, and in possibly using it as a model for other towns in NJ.  A non-profit called "Courage to Connect" is working to promote consolidations around the state -- Chad Goerner, former Township mayor, recently joined their board.

Q:  What is happening in regard to the Chief of Police situation?  A: It is a personnel matter and I can’t comment.

Q: I live in Hopewell where our municipal tax is 13% of property tax. Why is Princeton’s municipal tax so much higher at 20%? A: I would have to see all comparative components of the taxes. Likely the difference comes at least in part from different community values. For example Princeton government contributes much more to its Public Library than other communities do, and we have a Human Services Department which addresses the needs of less financially comfortable residents.

Q:  Is the new Princeton Council as interested in the Dinky situation as the former Borough Council?  A: Council is concerned about commuters’ access to the Dinky during the upcoming construction in the new Arts and Transit District. There will be a temporary Dinky platform, as well as busses to facilitate access.